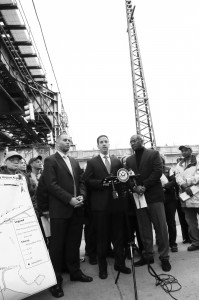 Assemblyman Phil Goldfeder was one of many speakers who addressed the issues concerning the restoration of LIRR services to the area.

The abandoned 3.5 mile Rockaway Beach rail line was back in the spotlight last Sunday as a trio of Queens’ lawmakers and transit activists gathered in Ozone Park to call for the line’s resurrection and to also explore various transit alternatives.

Assemblyman Phil Goldfeder (D-Howard Beach) was joined by Reps. Gregory Meeks (D-Queens) and Hakeem Jeffries (D-Brooklyn and Queens) at a press conference amid the rumble of the A train and honking cars on 99th Street and Liberty Avenue in Ozone Park, the end of the old Rockaway Beach LIRR line, in an effort to jumpstart plans to reactivate the line, which has been idle for 50 years.

Advocates for the line’s restoration say it would spur job creation, offer an efficient means of travel throughout Queens, especially from the Rockaways to Manhattan as well as helping to alleviate traffic congestion on major thoroughfares such as Woodhaven Blvd, the Belt Pkwy, Cross Bay Blvd and the Van Wyck Expwy.

“We need transportation that works for every resident,” Goldfeder said, noting that the borough has many travel options east to west but few from north to south. “This rail line would do it. Queens’ streets are jammed in the morning.”

Jeffries said that restoring the line would be an important step in helping areas hard hit by Sandy, such as Howard Beach and the Rockaways, to recover. “We know that Sandy hit our communities very hard. But, there’s a difference between a knockdown and knockout,” he said, adding that one way to make sure the recovery is complete is to explore restoration of the line.

He also pointed out that people in the Rockaways have amongst the longest commute times in the city and as a side effect end-up overusing their automobiles.

“We’ve been fighting for this since 1996…the train would be a win-win for all Rockaway residents,” said Lew Simon, an Assembly District leader, Rockaway resident and Chair of the Rockaway Transit coalition.

Simon said a restored line would mean diminished travel times throughout Queens including Rockaway to Penn Station in 32 minutes, to Howard Beach in 20 minutes and to Ozone Park in 18 minutes.

“This will improve the quality of life for Rockaway, Broad channel, Howard Beach and Ozone Park. This can be a reality and it can work. This will connect us to Long Island and all around the city. Today is a historic day,” he said.

Meeks said that the time to explore the Rockaway line’s restoration is now. “We now have an increased population in Queens now and it is the right time for us to put this study together,” he said.

Goldfeder said that a few hundred thousand dollars would likely be needed for the initial feasibility study that would look at some of the options for the line, options which could include construction of a subway, a light rail or “something else.”

However, a spokesperson for Goldfeder said that the logistics and the specific cost estimates would be left to the experts in the federal transportation department.

In a recent letter, Goldfeder, Jeffries and Meeks asked federal transportation secretary Ray LaHood that a portion of the state’s Sandy federal disaster recovery aid be allocated towards the restoration of the Rockaway Branch.

“The rest of the city has come back but some people have forgotten there is still suffering in the Rockaways,” Meeks said.

Dolores Orr, Chair of CB 14, said that her grandmother would be appalled if she saw what the state of travel was like now between Rockaway and the rest of Queens.

Orr related a story of how her grandmother, an NYPD detective in the 1930s and 1940s, used to travel to and from Manhattan in about 35 minutes.

“We need to have that same thing,” Orr said. “I don’t think she would’ve ever imagined that we would make travel worse for people in Rockaways and Queens. Citizens of the city have the right to efficient and timely transportation out to the Rockaways.”

The city-owned Rockaway Beach rail line ceased operation in 1962 and has since become an eyesore due to decades of neglect, becoming home to overgrown weeds, beer bottles and assorted debris.

Since at least 2005, a group of Queens’ residents, known as Friends of the Queensway, has backed a plan to turn the abandoned rail line into an elevated public park and green space, similar to the “high line” in Manhattan.

Other residents, many who live along the abandoned tracks in Rego Park, Forest Hills and Ozone Park oppose any development of the tracks fearing noise, security and pollution issues.