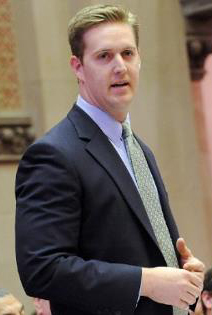 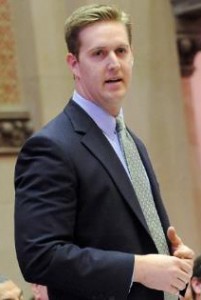 Assemblyman Andrew Hevesi took the “train by the engine” and secured $3 million dollars to upgrade the antiquated equipment presently used to haul freight throughout Queens and the city.

In an effort to both clean the environment in Queens and conserve energy, Assemblyman Andrew Hevesi (D-Queens) helped secure $3 million in this year’s state budget to upgrade the first of a number of antiquated high-emissions trains which are owned and leased out by the Long Island Rail Road to haul freight throughout the borough and beyond.

Hevesi was backed by several other Queens’ politicians including Councilmember Elizabeth Crowley (D-Middle Village) and Borough President Helen Marshall who recently wrote an open letter to Assemb. Speaker Sheldon Silver (D-Manhattan) requesting an appropriation of $17 million for the MTA to upgrade 10 outdated and highly-polluting diesel engines which operate through various parts of Queens, but in particular through Middle Village and Glendale.

The $3 million which Hevesi has helped secure in this year’s fiscal year 2013-2014 budget is also consistent with legislation Hevesi and several other Queens’ politicians, civic associations and the state’s department of environmental conservation backed last April to study the environmental impacts of railway traffic travelling through the borough.

Hevesi said that this first state-owned locomotive will be re-powered with an engine that meets current EPA standards for diesel engines. The engine’s upgrade is expected to result in an annual reduction in nitrogen oxide by up to 76 percent, or 120 tons of emission over a decade.

Nitrogen oxide, a known by-product of diesel engines, has been linked to lung infections as well as numerous other diseases.

Eric Yun, a spokesman for Council member Crowley said, “Our office is obviously very pleased that we were able to work together [with Hevesi] to ease some of the pollution caused by increased rail in this area.”

Crowley has previously called for the increasing need to take action to minimize the negative effects of diesel trains passing through the community and impacting local residents.

“This is the first win in what will be an ongoing fight to protect the health of countless families in Queens, Brooklyn, and Long Island,” Hevesi said, in a release.

He added that the state’s recognition that outdated trains can severely damage communities they pass through is an important first step in fixing this problem.

Hevesi also praised the efforts of various community activists, in particular Civics United for Railroad Environmental Solutions (CURES). “By shining and keeping a bright light on this problem, CURES has galvanized community support and made this solution a reality,” he said.

“While more will need to be done in the coming years, this is the first step toward making clean rail transport a priority in New York State.”