Prompted by a request from Queens residents last year, city officials are looking into bringing bike lanes to the area covered by Community Board 5 – and they’re asking for input on a plan that some civic leaders say could calm traffic congestion and create the bicycle infrastructure that the borough’s central neighborhoods lack. 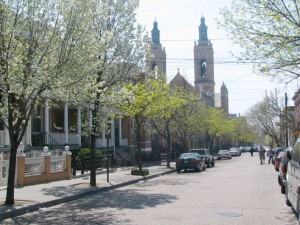 Although the exact route of the bike lane proposal is not known yet, one street between Onderdonk and Woodward likely safe is Stockholm Street, landmarked and often associated with the fabled “yellow brick road” because of the coloration of its cobblestones.

The Department of City Planning, the city Department of Transportation and CB 5 will host a community meeting on Saturday, May 11, from 11 am to 2 pm at Maspeth High School, located at 54-40 74th Street. A city DOT spokeswoman said the agency aims to gather feedback from residents about how and where bike lanes could work best in Community Board 5, which covers Middle Village, Maspeth, Glendale, Ridgewood, and South Elmhurst.

John Maier, a Community Board 5 transportation committee member and an avid cyclist who frequently rides his bicycle to work, welcomed the city’s plan, saying it would help to create a more cohesive bicycle infrastructure and connect bikers to already established lanes in places like western Queens or parts of Brooklyn. Additionally, he said the accessibility of bike lanes could take cars off the road if people find it easier to hop on their bikes.

“I’ve thought about an east-west route through Ridgewood to connect the eastern end of Williamsburg to Ridgewood,” Maier said of the city’s plan for CB 5. “… And Onderdonk and Woodward avenues are wide enough that they could have a delineated bike lane, one going east, one going west.”

Maier stressed that his ideas are preliminary suggestions and hopes there is a good showing from community members on Saturday to discuss what would be best for the area.

CB 5 District Manager Gary Giordano echoed this, saying the board welcomes “as many thoughtful people as possible” to discuss “if we can make definitive bike routes in the CB 5 area and where bike racks should be.

“I hope to get bicyclists in there who are regular riders to talk about how conditions could be made safer or what a safe route would be,” Giordano continued.

Following Saturday’s meeting, City Planning will conduct field surveys and traffic analyses to evaluate residents’ suggestions and consequently draft a plan for community approval. Once that has happened, the community board would vote on the final infrastructure plan and it would be submitted to the DOT for implementation.

“I have to wait and see where they’re going to put them in our neighborhood, if they are at all, but I’m kind of wary of this,” Holden said. “My experience with bike is lanes is that some locations are intrusive. Many bicyclists, especially where I work in downtown Brooklyn, disregard traffic regulations and come flying down the street. It’s really a free-for-all in these lanes.”

But Maier argued there are more car drivers who break traffic laws than bicyclists.

“Today when I was out, I probably saw a handful of what I call salmon – people riding bikes on one-way streets,” Maier said. “But I saw just as many, if not more, people on their phones texting or talking. People are jerks in cars, and people are jerks on bicycles. You don’t not have roads because people are jerks in their cars.”

Caroline Samponaro, senior director of campaigns and organizing at Transportation Alternatives, a nonprofit that will participate in the forum, also said the additional bike lanes would help to meet an increasing demand for safer ways to bicycle in a city where the number of people commuting to work doubled between 2007 and 2011, according to city statistics.

“If you look at a New York City bike map, it’s apparent central Queens lacks infrastructure,” Samponaro said. “That matters because if you think about a place like Brooklyn, where there’s been a serious investment, you can see where infrastructure plays a role in changing behavior and encouraging people to ride.”

Samponaro also praised the city and the community for holding the upcoming meeting.

“There’s a real demand for this,” she said. “These forums aren’t coming out of nowhere – they’re growing from the community and that’s exciting.”