Mayor Bloomberg presented his final budget last Thursday, a $69.8 billion plan he called balanced and said would maintain city services, but which drew ire from Queens elected officials and civic leaders who said it would force fire companies and libraries to shutter, decimate after-school programs and not add needed police officers. 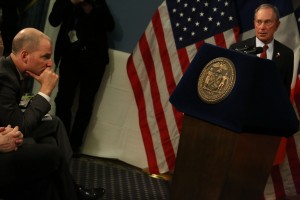 Mayor Bloomberg Presents FY 2014 Executive Budget amid the race for his replacement.

The proposed budget, which is slightly less than the 2013 plan and has to be approved by the City Council before being implemented, keeps spending flat and does not raise taxes. Much of it does not stray far from the budget the mayor originally outlined in January, though the most recent version would not reduce 1,800 public school teachers by attrition over two years, as had been originally proposed.

“Like every budget our administration has produced, this one will be balanced – and we’ll do it without increasing taxes or cutting critical services New Yorkers rely on,” Bloomberg said during his final budget address. “Responsible management of the budget has allowed us to increase education and investments so our public schools continue to improve, and investments in economic development have diversified the city’s economy and spurred job creation, generating new revenue streams for the city.”

Bloomberg took shots at labor unions during his speech, saying “non-controllable expenses,” such as pension costs, have risen dramatically in recent years. In the 2014 budget, Bloomberg said such expenses rose by 7.6 percent, or $1.7 billion, from $21.7 billion in 2013 to $23.4 billion in 2014. Arguing that the city must restructure healthcare benefits so municipal employees make some contributions to their health insurance premiums, Bloomberg said health insurance cost $6.3 billion in the 2013 fiscal year – twice as much as in 2002 – and is expected to grow by 32 percent, to $8.3 billion, in 2017.

Many of the complaints borough elected officials have about the budget proposal are the same kinds of concerns raised during what often seems like an identical budget dance each year. Now that the mayor has proposed his budget, the City Council will tackle it – and, often, they restore many of the cuts to senior funding, libraries and fire companies that the mayor annually requests.

Marshall has said Bloomberg’s budget could force six senior centers and four adult day care centers in Queens to close, as well as limit transportation programs for the elderly.

Councilwoman Elizabeth Crowley (D-Middle Village), chair of the Council’s Fire and Criminal Justice Services Committee, slammed the mayor’s proposal to close as many as 20 fire companies. The city has not said which specific sites could close, but in the past it has targeted Engine 294 in Woodhaven, Engine 306 in Bayside, Ladder 128 in Long Island City and Engine 328 in Far Rockaway.

Crowley also criticized the mayor for not increasing the number of police, which she and numerous other elected officials in the borough had recently requested in a letter to the mayor. Since 2001, the uniformed headcount for the NYPD has dropped by more than 6,000 and overtime spending just jumped from a little more than $200 million to nearly $600 million.

“Continuously relying on overtime to keep the NYPD understaffed and close fire companies is fiscally irresponsible management that puts our city in danger, and the cuts to after school programs will deny thousands of children critical educational opportunities,” Crowley said in an emailed statement.

“Of course I believe it’s an optimal number,” he said following a question from a reporter. “Do you really think I’m putting the city in danger?”

Officials also railed against the mayor’s proposal to slash about $135 million for after-school and early-childhood education programs, which the advocacy group Campaign for Children said would affect 47,000 students throughout the city. Two Queens sites that could be shuttered as part of the mayor’s proposal would be the Beacon programs at JHS 190 in Forest Hills and the Samuel Field Y in Bayside – the same two that Bloomberg targeted last year.

“While the mayor had one last opportunity to stabilize the child care and after-school systems, his budget proposals failed to do this,” the Campaign for Children said in a prepared statement.

“Perhaps we could close down half of all our 62 libraries,” Galante said during a recent budget hearing at Queens Borough Hall. “Or perhaps we can only be open three days a week at all our locations. All the choices to respond to a cut of this magnitude are terrible for libraries and terrible for the communities that rely on them.”