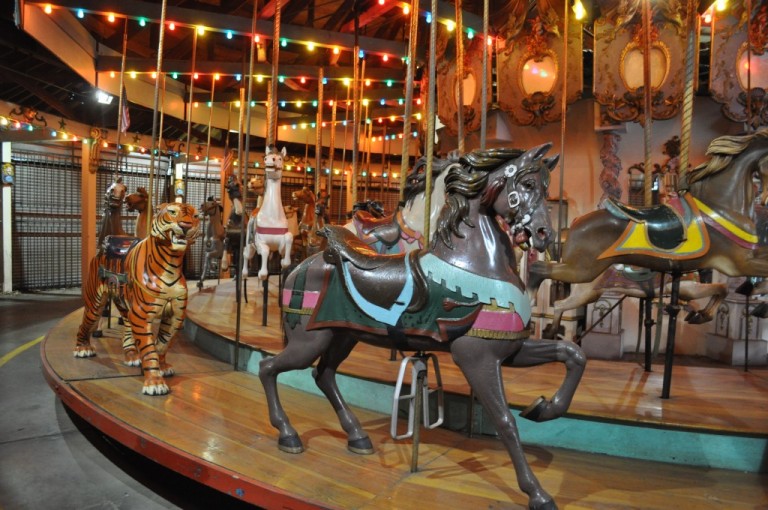 The city’s decision to schedule a public hearing on the possible landmarking of the Forest Park Carousel in Woodhaven last week drew both cheers and concern from area leaders and the merry-go-round’s operator, all of whom backed maintaining the historic structure but some of whom worried the landmark status could stifle renovation work with red tape. 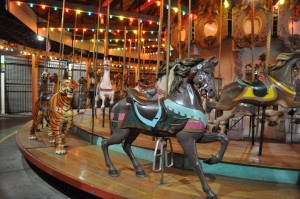 The city Landmarks Preservation Commission voted last week to hold a public hearing on landmarking the carousel that was built in 1903 – the first step towards officially preserving the merry-go-round that holds some of the last surviving creations of master wood-carver Daniel Carl Muller, including 49 sculpted horses, a lion, a tiger, a deer and two chariots. The LPC has not set a specific date for the hearing.

Maria Thomson, the executive director at the Greater Woodhaven Development Corporation and the Woodhaven Business Improvement District, said the city’s decision was welcomed by residents who have been fighting to landmark the carousel for more than two decades.

“We’re tired of getting concessionaires that don’t value it,” Thomson said in reference to past operators – not the current one that reopened the merry-go-round last Memorial Day after it was abandoned by New York One LLC in 2008. “They don’t take care of it, it closes and it falls into disrepair and there’s vandalism. If it’s landmarked, it will open up access to funding through the landmarking designation. That would be used to preserve the carousel.”

The Forest Park carousel is just one of two remaining carousels crafted by Muller, a German immigrant who settled in Philadelphia and built a total of 12 merry-go-rounds. It was first operated in 1903 in Dracut, Mass. and was brought to Woodhaven in 1972 to replace a different carousel that burnt down in 1966. There, the carousel turned until 1985, when it was abandoned for three years. The structure underwent an extensive renovation in 1988, after which it went through another number of operators. Comptroller John Liu found in a 2011 audit that New York One LLC, which ran the carousel until it let its contract lapse in 2008, mismanaged the merry-go-round, as well as another one in Flushing Meadows Corona Park, by overcharging customers, maintaining little to no records of its cash transactions and violating health codes.

After 2008, the city issued four requests for proposals and finally selected New York Carousel to operate the structure. New York Carousel opened the venue last Memorial Day, and its director, Ami Abramson, said there have been more than 35,000 rides on the merry-go-round in the past year.

Abramson said his company is open to the idea of the carousel receiving landmark status, though he stressed “we do of course have questions.”

Woodhaven Residents’ Block Association President Ed Wendell echoed a similar sentiment, saying he was not “sure what to make of it.”

“When you landmark something, you add such a level of bureaucracy and add such costs that it becomes harder and harder to maintain,” Wendell said. “In other words, they notice something that needs repairs – but to get the repairs going they’ll have to get in 17 different forms and approvals?”

Still, Wendell emphasized there are too many questions regarding what landmark status for the carousel would mean to render a yea or nay for his support for the status.

The city LPC did not return a request for comment for this article, but Thomson said Abramson should not be concerned about onerous restrictions on repair work.

“He should have no fear whatsoever,” she said. “He can get in touch with Landmarks, he’ll give them the schematics of what he wants done and they’ll approve it or not. If they don’t approve it, they’ll work with him to get something done.”

Councilwoman Elizabeth Crowley (D-Middle Village), who has worked with residents to get the carousel landmarked, said she was “encouraged” by the commission’s decision to “bring landmark status of the Forest Park carousel one step closer to a reality.

“This designation will protect and preserve the carousel for future generations to come,” Crowley said in a statement. “I look forward to working with the commission and the concessionaire to ensure this neighborhood treasure is preserved.”

Abramson said regardless of the carousel being landmarked or not, “we will continue operating it as a top-notch operation.”

He added that they are also “testing the possibility” of adding other rides to the area and “are taking a look at expansion.

“We’re going to have conversations with [the Parks Department] about potential expansion ideas and come up with a game plan,” Abramson said, noting that these discussions likely will not take place until the end of this season.