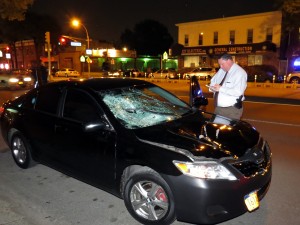 A smashed wind shield is evidence of the great impact that Rafael Diaz was struck with as he crossed Atlantic Avenue shortly before 7:30 p.m. Thursday evening. An unauthorized block of the sidewalk may have caused him to step out into the street.

A 73-year-old man crossing Atlantic Avenue between 87th and 88th Streets was killed on Thursday night after he was struck by a driver with an outstanding warrant for unauthorized use of a vehicle.

Police say Rafael Diaz was killed when a black sedan driven by 25-year-old Joel Rodriguez sent him flying into the windshield of the vehicle. Diaz was rushed to Jamaica Hospital where he later died.

Woodhaven Resident Block Association President, Ed Wendell said he had spoken to an eyewitness to the accident who informed him of a serious issue. “… They said you had a sidewalk that was blocked – a business has blocked a sidewalk,” Wendell recounted, “so this elderly man had to walk out into Atlantic to get around the vehicles and he was struck.” 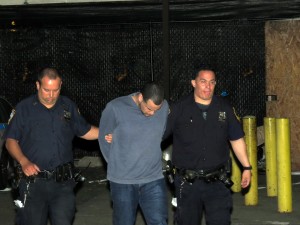 Police lead 25-year-old Joel Rodriguez into the 102nd precinct after he struck and killed a 73-year-old man. Rodriguez had an outstanding warrant for unauthorized use of a vehicle. Robert Stridiron/The Forum Newsgroup.

Wendell further added that a 102nd Precinct officer in attendance at Saturday’s Woodhaven Resident Block Association meeting, the “vehicle was going in excess of 60 miles per hour.” “Road safety in general in this community needs to be addressed.”

Rodriguez was arrested at the scene for an additional charge of unauthorized use of a vehicle. A one month old warrant was issued after an arrest on April 4 for the same charge. He was also given another violation at the scene for an equipment problem.