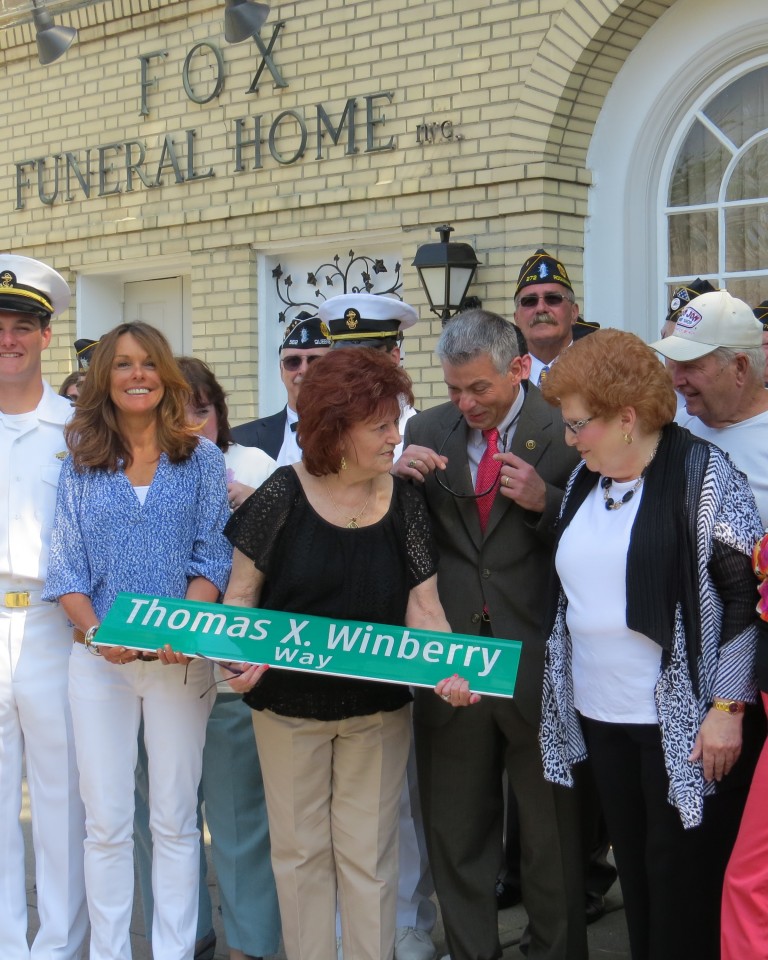 Just short of the two year anniversary of his passing, Thomas X. Winberry was honored in his hometown of Forest Hills on Sunday morning.

Winberry’s service to his country began in the US Navy, where he served in the Korean War. After his discharge, he joined the American Legion and continued in that service throughout his life.

A crowd of about one hundred family members, friends, community leaders and elected officials gathered to honor the former NYPD officer, American Legion Commander and patriot.

And as the ceremony got underway, Council member Karen Koslowitz started what was to be an extended line of praise and thanks for the Forest Hills fixture. One by one they remembered his devotion to the community and his staunch support of veteran’s rights. They cited commendations from the NYPD—a total of 15 over twenty years on the force– and his prowess for organizing the Forest Hills Memorial Day Parade and annual Thanksgiving turkey drives.

Assemblyman Andrew Hevesiwas one of the first to speak of his friendship with Tom Winberry —“He personally welcomed me when I first took office and I have to say that after having the privilege of working with him for years, the Memorial Day parade and 911 remembrances are just not the same,” said Hevesi. “ I would like to thank his family for sharing him with us. This is a great honor for a great man.”

“Tom was a fantastic man. When you look at Tom Winberry’s picture what you see is what you get–he was always smiling,” said former senator, Serf Maltese. “ In all the years I knew him, I never heard Tom Winberry say an ill word of anyone.” 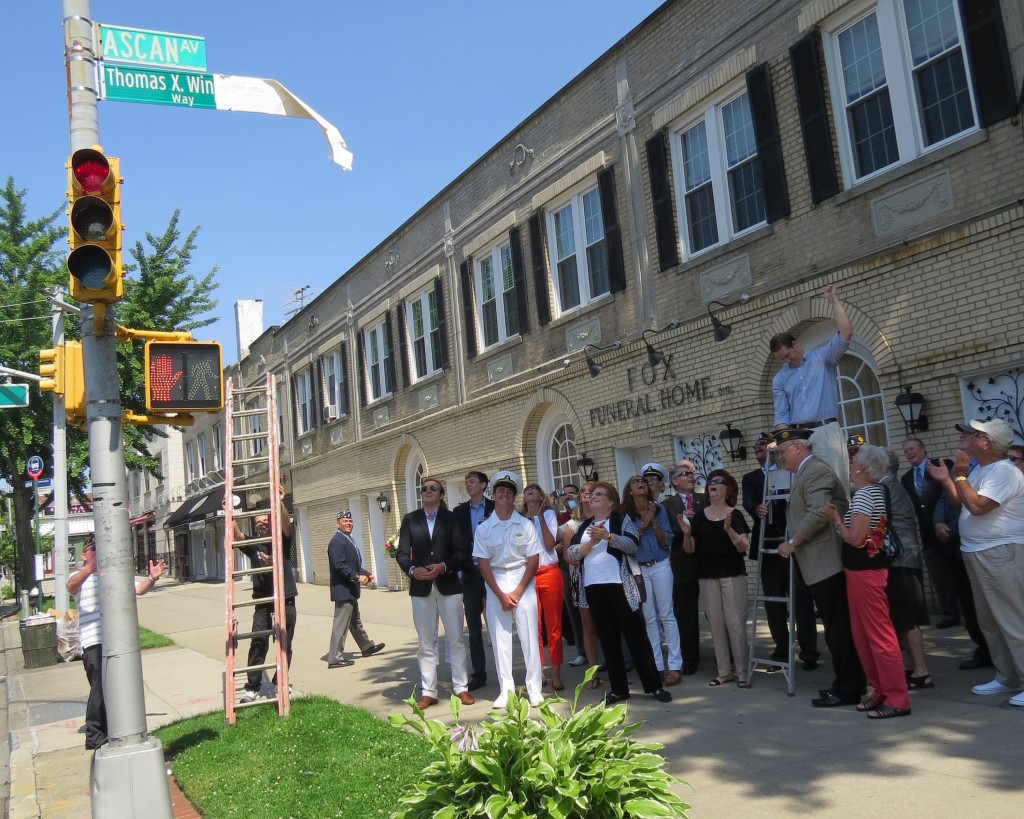 Assemblyman Hevesi breaks the string on a stubborn paper cover, drawing laughs from the crowd. It took two ladders and three sets of hands to finally unveil the sign.

Tom Long, current commander of American Legion Post1424, spoke of his predecessor. “Tom was a member of the Legion for 30 years. He was a commander for seven. Tom was a great guy. He was a doer, a leader, a commander.”

Long also praised Council member Koslowitz whom he said was truly responsible for getting the day organized and seeing it through and asked the crowd to join him in a round of applause.

Before moving off to reveal the sign reading Thomas X. Winberry Way, his widow Virginia spoke a few words about her beloved husband. She was accompanied by her children Debbie, Dottie and Patricia at the ceremony as well as several grandchildren.

“Thomas was a true patriot. He served his country in the navy, his city in the police department and his community with the many civic projects he started as Commander of the Continental Post. And of course he was my knight in shining armor. I know he’s looking down on all of us and smiling.”

The crowd then moved from their seating to assemble at the corner of Metropolitan and Ascan avenues for the official unveiling. Waiting patiently to see it for the first time, those in attendance got more of a show then they had planned. The paper refused to come off and a total of three men and two ladders were enlisted to get the job done.

In the end it was Assemblyman Hevesi who managed to pull enough of the paper off to finally reveal a gleaming new street sign–Thomas X. Winberry Way.