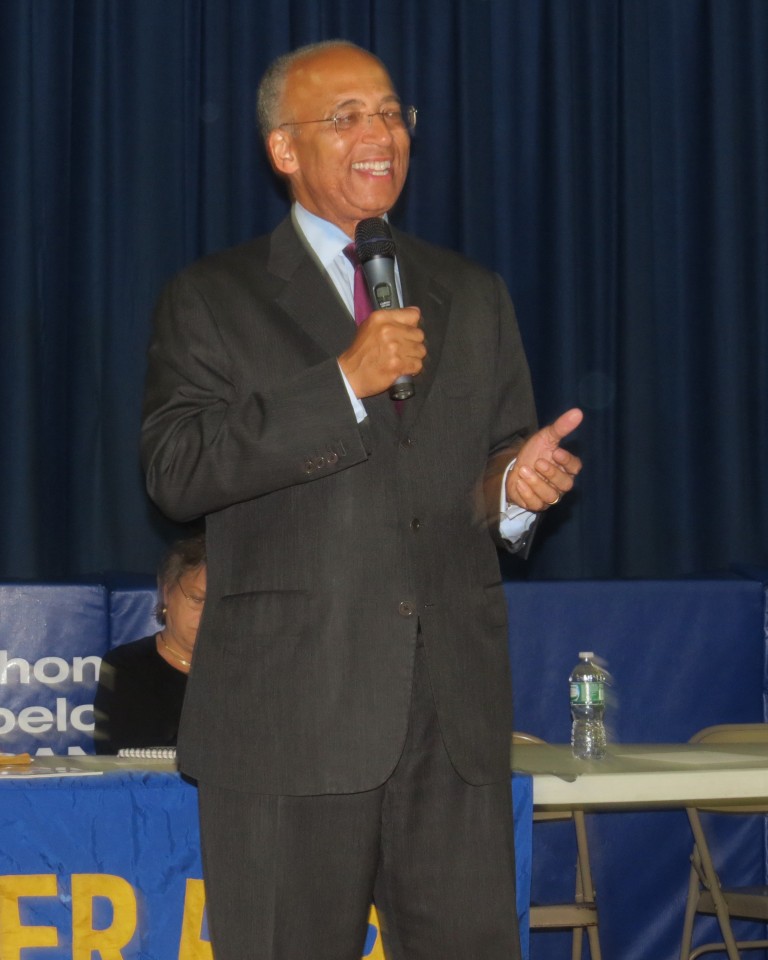 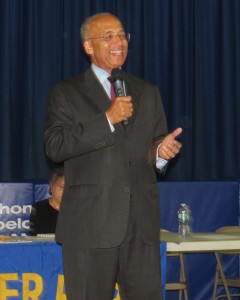 While Democratic mayoral candidate Bill Thompson is trailing two of his opponents in citywide polls, he seems to have racked up plenty of support in the old stomping grounds of one of his opponents – newly crowned front-runner Anthony Weiner.

Thompson spoke at the Juniper Park Civic Association meeting last Thursday, and if the reception he got at one of the city’s most influential civic groups is any indication of how he may fare in September’s primary in mid Queens – an area once represented by Weiner before he resigned in 2011 in the face of a sexting scandal – the former city Comptroller may be able to land some serious support in some of the borough’s more conservative neighborhoods, such as Middle Village and Maspeth.

Introduced by JPCA President Bob Holden as the man who “should be the mayor of New York,” Thompson, who falls behind Weiner and Council Speaker Christine Quinn (D-Manhattan) in the polls, garnered loud bursts of applause while lambasting Mayor Bloomberg for running for a third term in 2009 and blasting the city for an “education system that doesn’t work” during his speech to one of the city’s largest, and most vocal, civic groups.

“Mr. Thompson, I would vote for you for president,” one audience member shouted after Thompson wrapped up his speech.

Thompson, who ran for mayor in 2009 and was the city Comptroller from 2002 to 2009, has support from about 13 percent of registered Democrats, according to the latest Marist poll. Weiner, for the first time since he officially jumped into the race last month, has moved into first place with 25 percent of the vote and Quinn has landed in second with 20 percent – the lowest number she has hit since polling in the race began.

The candidate hit most of his regular talking points during the meeting, including scathing remarks about Bloomberg’s campaign to convince the City Council to vote for a change a term limits that allowed him to run for a third time in 2009 – a move largely panned by the majority of city residents. He also noted, as he does in many of his public speeches, that Bloomberg far outspent him in the 2009 campaign, with the mayor coughing up about $120 million for the race and Thompson shelling out approximately $9 million.

“But we came close in that election – four and a half percentage points,” Thompson said.

The candidate – who last week landed the endorsement from the United Federation of Teachers – also slammed the city’s education system for what he said has been an overemphasis on standardized testing and a decimation of music and art programs in schools throughout the five boroughs.

“We need to stop this focus on standardized testing and focus on comprehension,” said Thompson, the former president of the now defunct city Board of Education – which was replaced by the Department of Education when Bloomberg assumed control of the city’s public school system in 2002.

He argued there needs to be an increase in the number of police from the current 34,000 to “at least 37,000 officers,” and he called for a change to the city’s controversial stop and frisk program.

And he, like many of the candidates, said the Bloomberg administration has created unfair financial burdens for small businesses, including inspections from a host of city agencies that result in fines for tedious offenses, such as having a piece of paper in a non-recycling garbage bin.

“Train activity has gone up and up and up,” Pedalino said of the waste freight trains that travel through his neighborhood.

“The problem is communities haven’t been heard,” Thompson told Pedalino. “I’m not talking about your electeds; I’m talking about City Hall.”