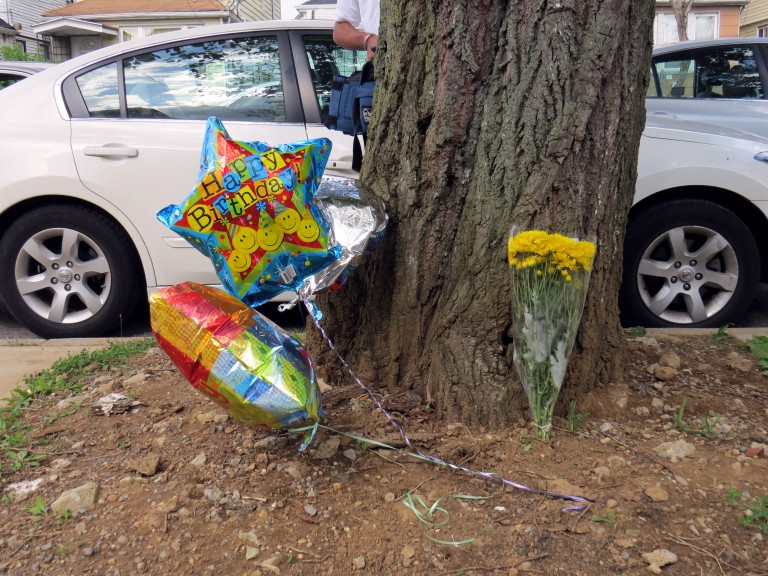 But four hours before his 20th birthday, Danthony McDonald, who lived in South Ozone Park with his parents, died in his father’s arms after being stabbed in the chest by an unknown assailant Friday night – leaving behind him a string of unfinished dreams and devastated family and friends who called McDonald “famous for being the best person on the planet.” 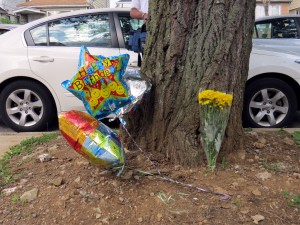 Friends and family set up a memorial for Danthony McDonald, including balloons that had been meant for what would have been McDonald’s 20th birthday. Robert Stridiron/The Forum Newsgroup

“He had too much life to go the way he did,” his mother, Chantal Jacques, said in front of a semi-circle of candles illuminating a framed photo of her son. “He had so much more to do, so much more to say.”

Police were called to Linden Boulevard near 129th Street at about 9 p.m. Friday evening, when they found McDonald with a stab wound to the chest. He was pronounced dead at Jamaica Hospital Medical Center.

Police arrested Wilson Rivera, 19, on Tuesday and charged him with murder and criminal possession of a weapon. Rivera lives a couple blocks away from McDonald’s house, on 127th Street.

Friends of McDonald said the suspect allegedly stabbed McDonald after getting into a fight with him earlier in the evening.

A 2011 Forest Hills High School graduate, McDonald – an honors student and member of the basketball team – was planning on joining the Marines within a few weeks, according to his parents. His family said they couldn’t have been more proud that he was going to enlist, and on Saturday family and friends were expected to gather at his house near 129th Street and Linden Boulevard to celebrate his impending departure for the Marines – as well as to commemorate his 20th birthday. There was going to be music – including some by McDonald, a rapper who had planned on making a music video with his friends this week; there was going to be food and dancing and laughing and teenagers talking about the rest of their lives. There was going to be McDonald – a boy whose long list of admirers included everyone from girls he charmed to an elderly neighbor to whom he had lent an umbrella to a fellow Forest Hills High School graduate who said he never would have completed his studies had it not been for McDonald – on what was to be a day marking a new chapter in his life. 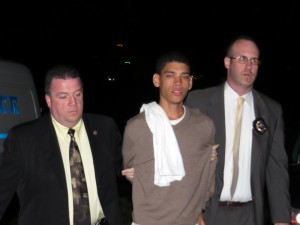 Wilson Rivera, 19, of South Ozone Park, was arrested Tuesday and charged in the murder of Danthony McDonald.

Instead, there was a line of people streaming into the house to tell Jacques and the teen’s father, Erick Anderson, how much their son – the eldest of four siblings – meant to them.

“He was the nicest boy in the world,” said Anderson, McDonald’s father who tried to revive the teen with CPR as he lay bleeding around the corner from his house. “Everybody loved him.”

“He was an example to his friends on how to walk the other way,” Velez said. “He spoke to you with manners, with respect. He was kind and courteous. He had such humility.”

That courteousness played out time and again across his neighborhood, family said.

“One time this old woman knocked on our door and asked if I had a son, and I thought, ‘uh-oh, what has he done?’” Jacques said, smiling. “But she said she had come to return his umbrella because he had given it to her when it was raining.”

A musician whose favorite artists included Fabulous and Pusha T, McDonald was in a musical group, “TPC” with his friends and had recently penned a song titled “No Scams.” But as much as he loved music, McDonald hoped to turn his passion for photography – which his friends said could be seen in a constant documenting of life – savvy portraits of teenagers on the cusp of adulthood – into a possible career.

“The last text I got from him, on June 12, said he was going to look into schools to do photography,” Anderson said.

Vincent Simmos, who befriended McDonald when they were both 4 years old, also praised his friend’s skills – from photography to boosting the confidence of everyone around him.

“He knew how to take really good pictures,” Simmos said. “He was funny, outgoing – everyone enjoyed having him around. He was different from everyone.

Now, his family said, the young man who should have been snapping photos at his birthday party and packing the two Marines hats his father had purchased for him, will be lying in a casket.