Nice homes. Easy Access. Those are the two main reasons burglars keep revisiting the normally quiet, tree-lined residential streets of Forest Hills accordinig to the 112th precinct top cop, Captain Thomas Conforti. And with a background as deeply rooted in burglary investigations as his, Conforti’s expertise goes a long way. 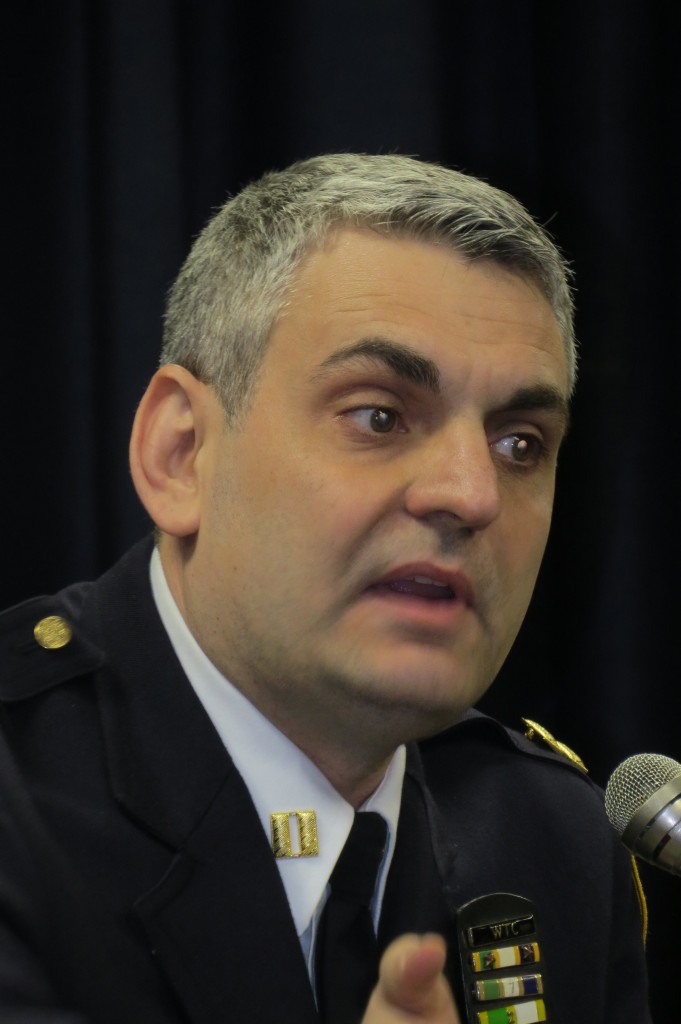 Captain Thomas Conforti is putting his vast experience in burglary investigation to good use. His 112th Precinct has been hit by numerous burglary patterns since the beginning of the year. File Photo

“In my experience, burglary is a crime of opportunity,” Conforti told The Forum in an interview. “Criminals will go to an area, scope out a house where there is an easy entrance, no alarm, no complications. If they see something they don’t like, they move on to another location.”

In recent months a burglary pattern in which doors were kicked in and jewelry taken lasted for a few months before the arrest of local resident Paul Hisler, a burglary parolee. Then another pattern emerged where entry was made through kitchen windows. The suspect in that pattern, Harry Rivera was subsequently arrested and accepted a plea for six years in prison.

But on June 21, he faced another burglary challenge in the precinct, when a new pattern emerged after two more homes, just on or off Olcott Street were robbed. This time thieves who did the burglaries, did not walk away from alarmed residences this time; instead they cut the phone wires and knew exactly which ones would disarm the alarm system. The incidents seem to have been carefully planned out and thieves made off with both jewelry and electronics. Only six days later, thieves struck again, targeting two more homes, one on 69th Avenue and another on Manse Street. Both of the break-ins happened in the evening hours and both were in the zone of a previous burglary pattern in the precinct.

Conforti and his burglary team are again devoting tremendous resources to making an arrest in the new burglaries and they are urging the residents to be vigilant in taking whatever steps they can to help protect themselves and their homes—especially locking doors and windows. “For years this is a zone has been always a target for burglaries,” the captain commented. “This is due to the nice homes and the easy access on and off Metropolitan Avenue, Union Turnpike and Yellowstone Boulevard.” Because the location is vulnerable on all those levels, it remains an attractive target for thieves.

Long-time resident Martin Bellerman has been taking walks through the neighborhood on a regular basis for many years. “It seems to me,” says the 86-year-old retired accountant, “that almost everybody can afford a surveillance camera these days. I see many homes with them but some without. That’s the way to catch them.” And many neighbors agree with Bellerman’s assessment. Video surveillance is employed more and more with residents and business owners eagerly offering their recorded evidence to help police in their investigations. A four camera surveillance system, of acceptable quality can be found readily on the open market for under $300. “A no-brainer, as we used to say in the old days,” quipped Bellerman.

In addition to the developing burglary pattern, two separate instances on the streets of Forest Hills, were reported out of the 112th. The first incident involved three victims who were robbed at gunpoint on Slocum Crescent. They had just finished having dinner at a restaurant on Ausitn Street and walked home to one of their residences, when they were approached by two males who held them at gunpoint and took thier jewelry, money and cellphones and fled the scene. The 112 Precinct Detective Squad is currently investigating the incident. And on Sunday night an off-duty police officer from the 112th was accosted by two individuals outside the Barnes and Noble Bookstore on Austin Street who took his knapsack. As of Tuesday afternoon, the precinct was questioning two persons of interest in connection to the incident.

The 112th Precinct Community Council continues to maintain a Facebook page to inform the community of the latest developments in the burglary developments as well as other crime in the area.

More than 400 community residents packed a hall in early April after the first burglary pattern emerged in Forest Hills. After swift arrests, police are now hunting for suspects in three more burglaries since June 21. File Photo