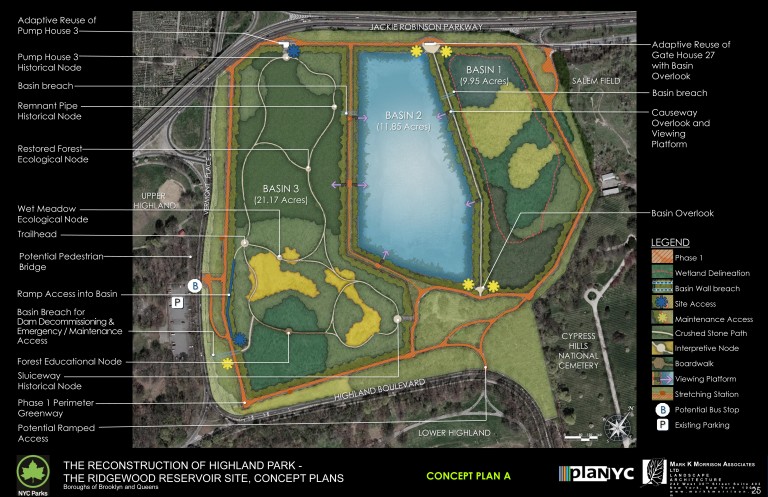 The proposals for the Ridgewood Reservoir that city Parks Department officials unveiled last week are the culmination of more than five years of work – including numerous contentious meetings with area residents and surveys given in multiple languages – and range in ideas from stone entranceways to rock climbing.

But no matter what the city and residents decide is the best plan for the 62-acre three-basin reservoir, which provided water for Brooklyn from 1858 to 1959 and has reverted to wetlands, meadows and forests after being decommissioned in 1990, there is currently no funding for any of it to be accomplished – leaving residents wondering just what will happen to the site that is located alongside the Jackie Robinson Parkway on the border of Queens and Brooklyn.

“The bad news is there’s no funding stream – but it’s also the good news that there’s no money,” said David Quintana, an Ozone Park activist who has been working with other area residents for years to ensure that the reservoir, which is home to more than 180 plant species and 127 species of birds, remains a nature preserve and does not house such active recreation sites as sports fields. “It’s good news because that means the city won’t destroy the place.”

Mayor Bloomberg originally allocated about $50 million in his PlaNYC 2030 program to renovate the reservoir – situated on a ridge formed by the Wisconsin ice sheet’s terminal moraine, which created views from the reservoir of everything from Woodhaven to the Rockaways and the Atlantic Ocean – but that funding was slashed as the economy grew worse and community groups voiced opposition to allowing active recreation – like the sports fields for which the city had originally advocated – in the reservoir area. Finally, just $7 million of the original funding was left – and that is being spent on what is known as Phase 1 of the reservoir project, which includes new lighting, restored pathways, wheelchair-accessible entry points, and new fencing along the reservoir’s perimeter.

As for the three concept plans presented by Parks Department officials at last Thursday’s meeting organized by Community Board 5’s Parks Services Committee?

“We’re hoping everyone will be so jazzed that they’ll get their elected officials to open up their pockets,” said Katie Raschdorf, a consultant project manager for the Parks Department who presented the plans alongside Parks Department representative Joelle Byrer.

But, until then, the three plans – created by the Parks Department through Mark Morrison and Association, a consulting firm, and none of which, officials stressed, are set in stone – will remain two-dimensional proposals. 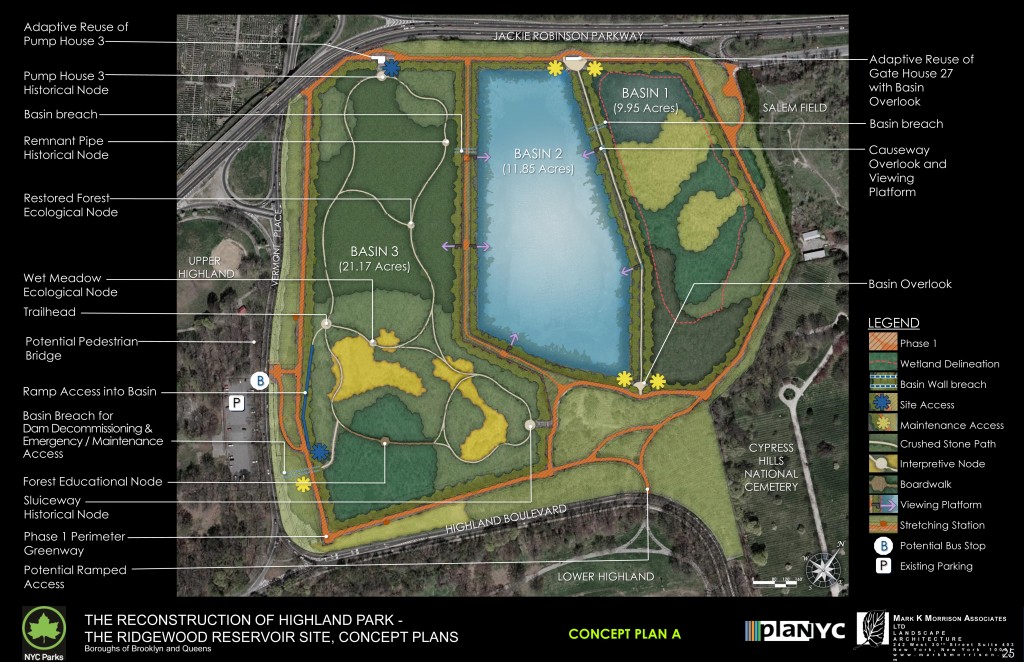 The first concept plan – known as Plan A – would implement the least amount of change in the reservoir, officials said. As part of that proposal, there would be a gated public access – potentially a stone entrance similar to what is in Central and Prospect parks – to Basin 3, the largest of the basins located by Vermont Place. There would be a potential pedestrian bridge and an overlook allowing individuals to see Basin 1 – a seven-acre wetlands area located adjacent to Salem Field Cemetery – and Basin 2, the middle site that includes a freshwater lake. Among other items, there would also be educational kiosks that Parks Department officials said Parks rangers could use to teach students about the history and ecology of the site.

As part of Plan A, Basin 2 would remain water and there would be habitat restoration conducted in Basin 1. 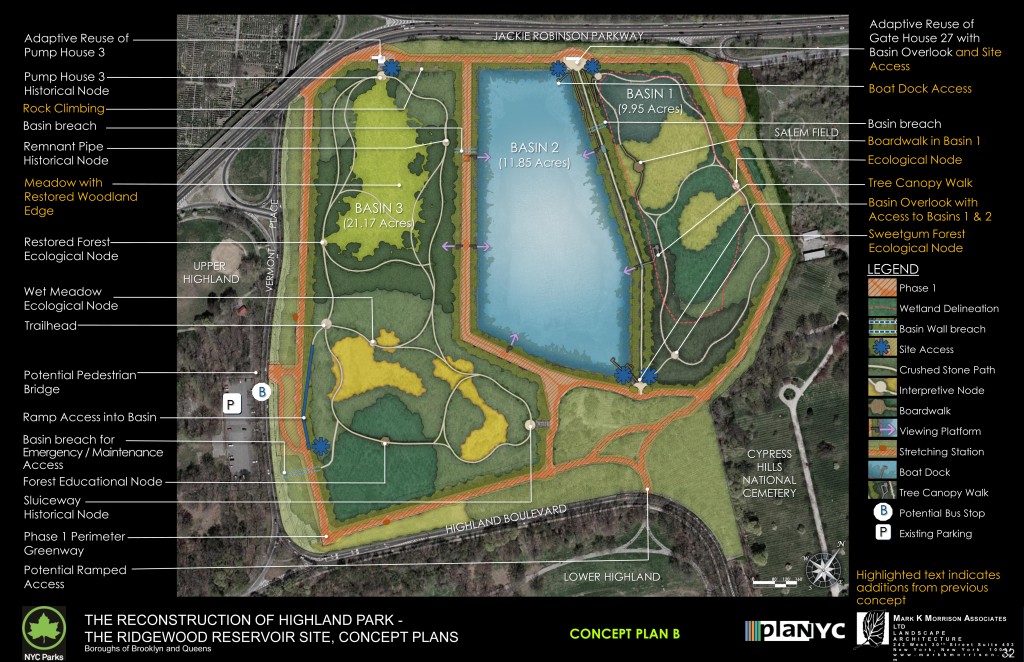 Plan B includes more development than the previous proposal, including a four-acre lawn area in Basin 3. In addition to everything spelled out in Plan A, the second proposal would include a tree canopy walk, boat dock access – allowing for canoeing or kayaking – in Basin 2, and rock climbing, among other items.

The third and final plan, Plan C, drew the most criticism from community members at the meeting. It included an eight-acre lawn in Basin 3 that would include three baseball diamonds and a soccer field. There would be a rock climbing wall, as well as a “water-themed” playground for children.

Those who spoke at the meeting said they were more pleased with these plans than anything the city has advocated for before, saying it seemed as though the Parks Department incorporated residents’ ideas for the reservoir.

Thomas Dowd, a member of CB 5’s Parks Services Committee, said he was happy to see such options as the educational kiosks, but stressed his group would oppose the active recreation elements of Plan C – such as the water-themed playground.

“Any plan needs to treat the community boards like partners, in developing a destination park related to eco-tourism and the potential vistas of the oceans and the wildlife and unique engineering, and the history going back to the American revolution,” Dowd said.

Many of those who spoke stressed the need to keep the reservoir as a nature preserve.

“As a native New Yorker, I’d love to see as much of its original character remain intact,” said Joy Fieldstadt, who grew up riding her bicycle to the reservoir and continues to regularly visit the area.

Lou Widerka, a Ridgewood resident and avid bird watcher, said he supports the educational kiosks but, like many of those who spoke, does not want something like sports fields going into the area.

CB 5 Chairman Vincent Arcuri asked residents to send the board ideas about the concept plans.

“We need input from all of you,” Arcuri said. “In the next three weeks, anyone with ideas, put it in writing and send it to us.”