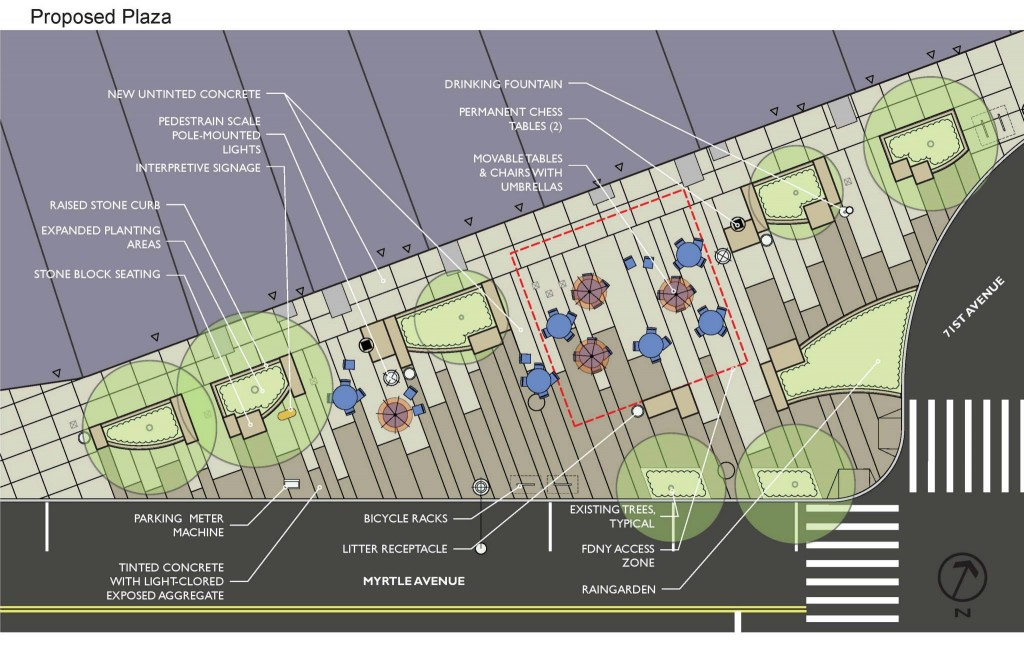 The plan to redesign 71st Avenue in Ridgewood into an area useable for the public is moving into its next stage of development. For the past year, the city Department of Transportation has been working with the Ridgewood community to come up with a new design for the area.  The idea is to make the once dangerous intersection into a pedestrian area and public green space as part of the DOT’s citywide plaza redesign project.

Scott Gastel of the DOT said that the project began when the 71st Avenue area, between Myrtle Ave and Stephen Street, was selected for the DOT plaza program in 2011. During the planning of the redesign, the DOT has erected a temporary plaza area and has received positive feedback from the Ridgewood community.

The temporary plaza makes use of the street without any construction by using temporary chairs and umbrellas, and sectioning off that part of the street.

Theodore Renz, the director of the Ridgewood Local Development Corporation, the group that will maintain the plaza, said that one purpose of the plaza project is to encourage local commerce, and he has noticed certain businesses have vocalized a positive effect since the temporary space has been implemented.

“People come sit at the plaza and then discover my café,” Alam said. “The plaza brings foot traffic to our area which is good for business.” After a year of holding workshops to get public input, there is a close to solidified plan for the permanent redesign. Renz said that all the people who attend the group meetings are in support of the plaza and “want it built.”

Community Board 5 will vote at its September meeting on a plan to implement a permanent pedestrian area and green space at the 71st Avenue Plaza.

Vincent Arcuri, Chairperson of Community Board 5, explained what could be included based on the current plan. He said, “They have selected paving designs, tree planters, water fountains and bicycle racks” at the suggestion of the community. The redesign will also include a permanent chess table, moveable chairs and umbrellas and a rain garden for water runoff from the streets. The plan includes adding a variety of plants, flowers and vegetation into the permanent plaza.

“The DOT and the architect are are very amenable to the suggestions of the community,” Arcuri continued.

For the most part, the DOT has been able to accommodate the needs of the community, but they could not include everything. For example, Arcuri said that some community members wanted to include more trees but the area needs to have fire department access.

The CB 5 chairman said, now “they are working on upgrading the schematic” following the last public meeting on Aug. 19.  They worked on changing smaller issues such as picking the color of the umbrellas.

Renz added that they are working towards the final design now. On Aug. 27 the community board’s transportation committee decided to pass the current design, which will then will go to a full vote at the community board meeting on Sept. 18.

Renz said that once that happens it will go to the Public Design Board and,  “if everything goes according to schedule we will hopefully have a shovel [in the ground] about a year from now.”