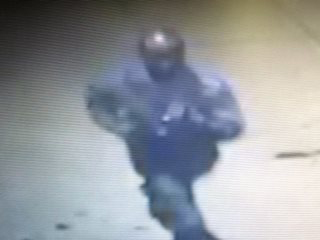 Police are looking for this man, who the NYPD says burglarized a number of spots in the 112th and 104th precincts. NYPD

Police are searching for a man who allegedly burglarized numerous locations in the 112th and 104th precincts last week, including two restaurants on Metropolitan Avenue in Forest Hills.

Plain clothes police witnessed the individual reportedly trying to break into La Vigna Restaurant on Metropolitan Avenue near 70th Road early last Thursday morning, but the criminal fled upon noticing he had been seen, according to the NYPD.

“The officers gave chase but lost the male in an alleyway,” Capt. Thomas Conforti, commanding officer of the 112th, told the precinct’s Community Council. “At that time an extensive search took place with helicopters and police dogs, but it failed to turn up the burglar.”

During the ensuing investigation, police discovered the suspect allegedly hit a number of spots in the area. All the locations that were burglarized did not have either an alarm or security cameras, and the burglar managed to make his way into the sites through dimly-lit alleyways behind the buildings’ main entrances, police said.

La Bella Russo Pizzeria and Chalet Alpina, which are both on Metropolitan Avenue, were hit in Thursday’s pre-dawn hours. The burglar managed to reportedly gain access to La Bella Russo around 3:20 a.m. and $225 and a Kindle were stolen, officials said. The man then allegedly snagged cash from Chalet Alpina around 4 a.m.

Conforti has asked residents to remain vigilant and to call 911 about any suspicious activity.