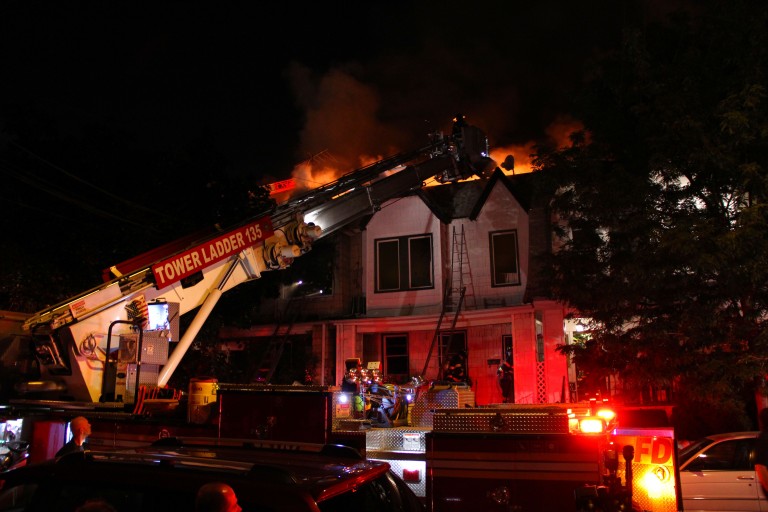 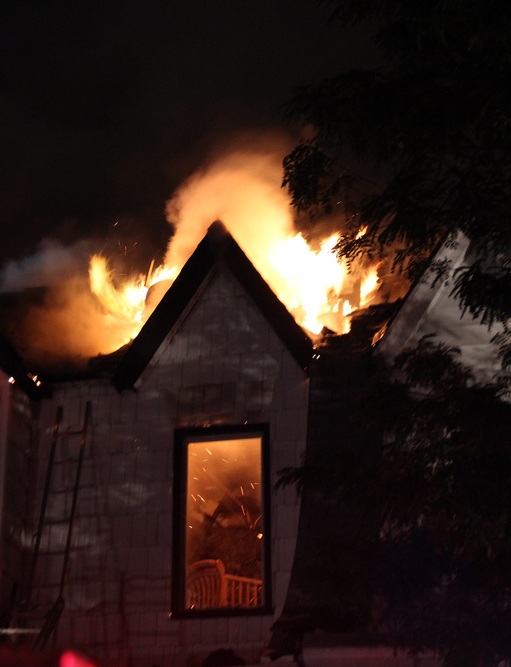 A baby’s crib is seen clearly after firefighters broke out a front window in the second story revealing inferno like conditions. Richard York/The Forum Newsgroup

A raging blaze that began in the airshaft between two attached homes in the heart of Middle Village has displaced seven families and destroyed their belongings. More than a dozen children, from ages 2 to 19, lived in the row of homes destroyed.

Logs show an 8:29 p.m. call brought the first FDNY responders to the scene two minutes later. But by the time the fire was brought under control more than two hours later, more than 50 units had been dispatched. Fighting the blaze was complicated by limited access on the narrow street, an abundance of overhead wiring and the common roof space which allowed for rapid spread or the fire.

One fireman was trapped in the top floor of the home at 78-13 and a mayday was issued for his recovery. He managed to stay down low, beneath the flames, while fellow firefighters worked to free him. He was one of 13 firefighters who were injured and received treatment at area hospitals. Fortunately, none of the injuries were life threatening. 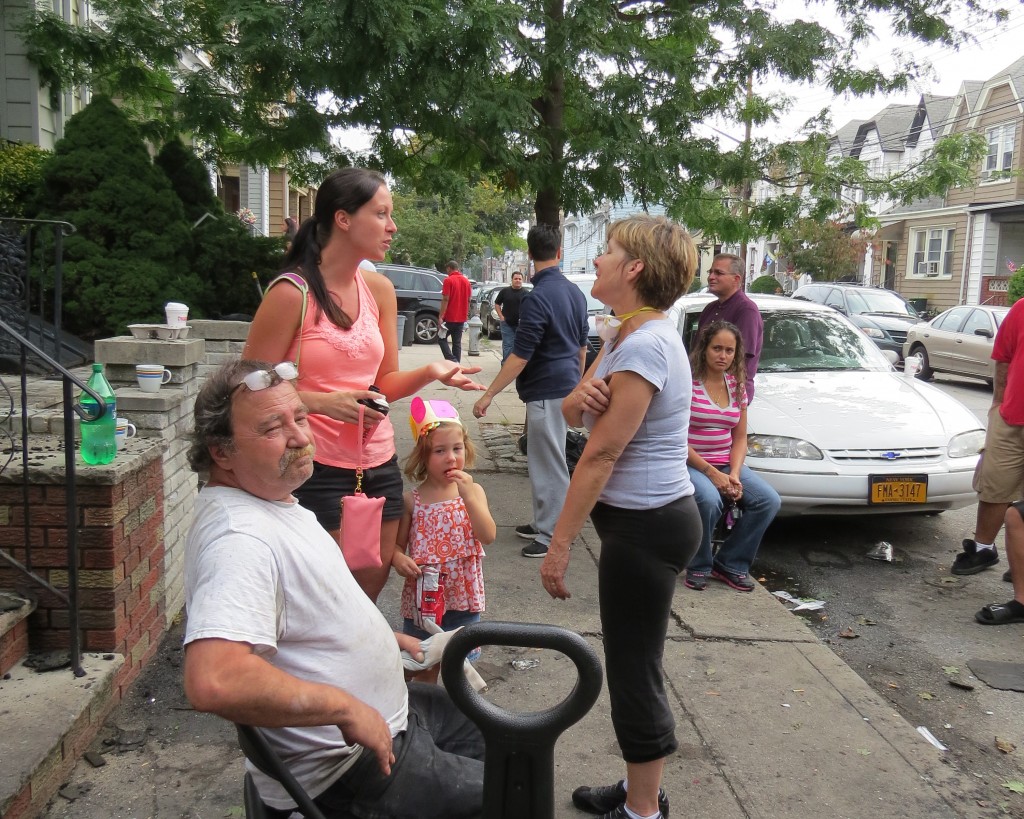 Linda Rabich took time to chat with the mom of one of her first grade students who along with countless others, stopped by to offer whatever help was needed. Patricia Adams/The Forum Newsgroup

Linda Rabich, a first grade teacher at IS 113 in Glendale for over 15 years, has lived in the row house at 98-15 68th Avenue with her husband Artie and their daughter Kristina, also a teacher, for over 10 years. She says she thought someone was barbequing on Monday evening but twenty minutes later, Rabich says, when the smell got stronger, she told her husband the smell was very powerful around the airshaft and asked him to check it.

When he got to the center of the house, Artie Rabich raised a curtain covering the window that overlooks the airshaft. What he saw took him completely off guard. “I knew we had to get out quickly”, he said shaking his head. A description explains; “It was like a fire bomb–going straight up in the air. The top floor was going to go.” He and his family went running in different directions to get their neighbors.

“The babies were upstairs,” said Linda, where a family with two small children was at home settling down for the night after dinner. “So I headed up there and used my big mouth. I told them there was a fire and we had to get out.” After that, she says everything moved very quickly.

With all the neighbors having been accounted for, families lined up across the street and watched over 200 firemen battle the 5-alarm blaze that was claiming their homes before their eyes.

And according to Rabich, her neighbors have all been unbelievably supportive. “Tragedy teaches you something about people,” the first grade teacher said, “They saw we needed help and they opened their homes and their hearts. They’ve taken in kids to sleep and continue to feed everyone. They are to be blessed.”

Other residents expressed their disbelief and concern. “It was unbelievable,” said Tony Deluca who has lived down the street for 28 years. “It looked like a volcano. Fire bursts came flying over here,” he said pointing to a driveway behind where he stood. “I could feel the heat, feel the burn on my legs.”

Cheryl Martinkat, who lives across the street from the blaze, said she hurried to close windows as black smoke came billowing in from across the street. “My youngest daughter is asthmatic. We were scared.”

And both neighbors relayed concerns over the fact that firefighters had a hard time making their way through one of the houses that they say is inhabited by hoarders. “The firemen could not find their way in there,” said Deluca, “that puts all of us in danger.” Neighbors speculated additional problems in the fire stemmed from the absentee landlord and say that the property is not maintained correctly. “Tenants have to be held accountable,” said one woman who would not give her name. “Take a look at that porch,” she said pointing at the house at 98-13. There’s a gas grill out there. It was out there with all that other stuff. I’m surprised there hasn’t been a fire long before now.”

Outside the charred row of houses on Tuesday morning, Linda Rabich was not interested in taking any credit for having saved her neighbors. “I have a big mouth,” she joked. “I’m glad it came in handy.” Rabich says although they lost everything, no one was injured and the firemen are all safe. “I just want to say, that I could never say enough about how wonderful the FDNY and the police have been. They are truly, truly wonderful.”

Several families affected by the fire are parishioners or have had students in attendance at St. Margaret’s. The school and the church are setting up for donations. School Principal Philip Franco said the school will be collecting gift cards for supermarkets, restaurants, CVS and similar stores.

The church is also putting together a plan for more specific donation items like clothes, toys for the children, toiletries and other things of that nature. Details for that have not yet been worked out but anyone wanting more information is urged to contact Sr. Bridget at her office in the rectory. The number there is 718-326-1911.

The FDNY completed their investigation on Tuesday, ruling the fire was accidental and caused by electrical circuitry.