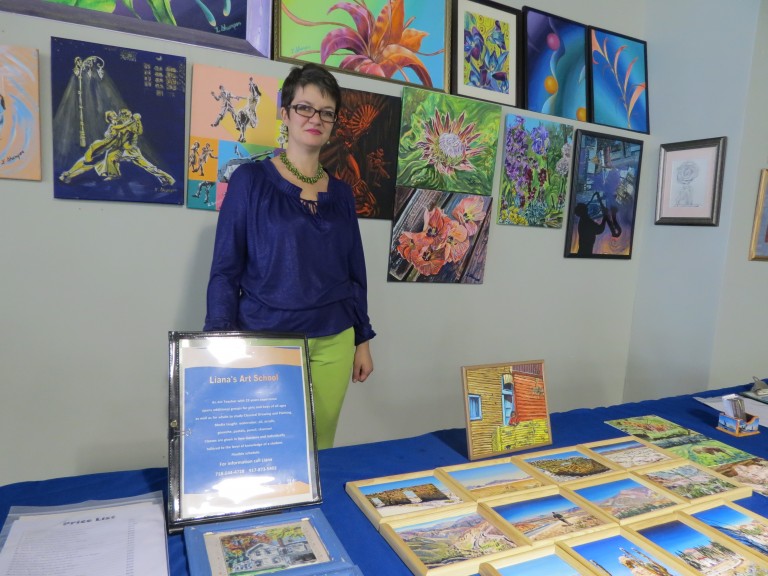 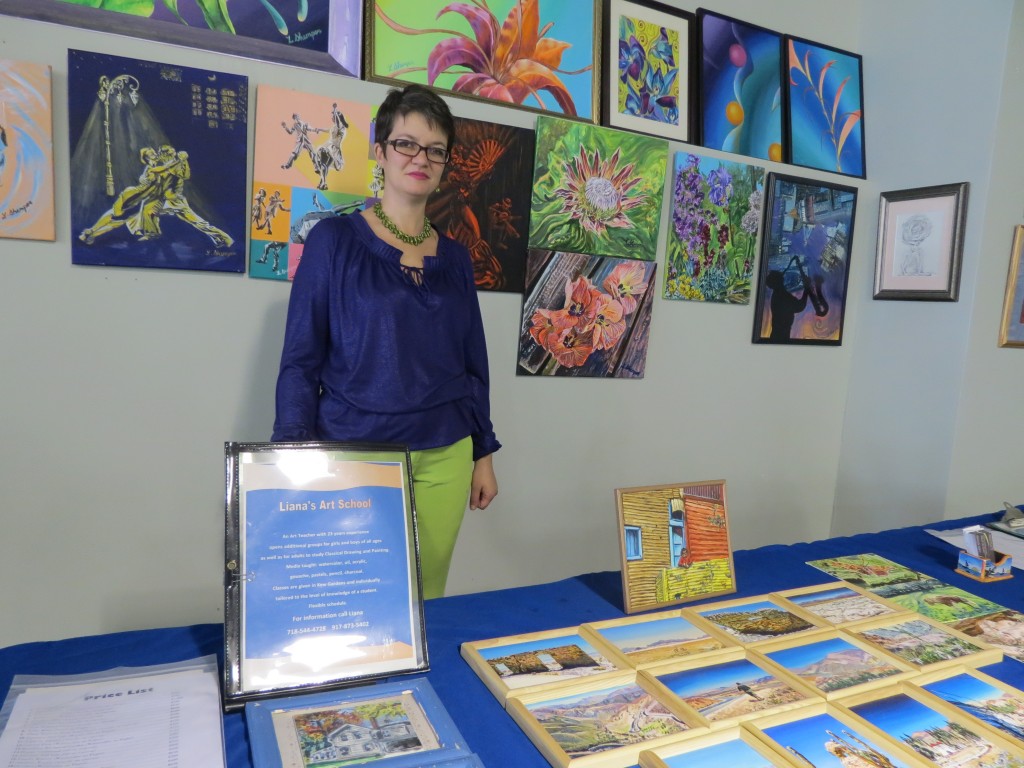 Liana Shemper, who has run an art school in Kew Gardens for 23 years, exhibited a number of her paintings at the Make It In America fair in Glendale last Saturday. Anna Gustafson/The Forum Newsgroup

From a Kew Gardens artist’s paintings inspired by the Argentinian desert to a Bayside author’s comedy books and a Ridgewood woman’s eclectic jewelry collection, the “Make It In America” fair in Glendale last weekend drew a wide variety of Queens business owners who all agreed: The borough’s economy is not only alive, it’s thriving.

Saturday’s event, a nearly all-day affair at Atlas Park, was sponsored by U.S. Rep. Grace Meng (D-Flushing), who said she wanted businesses to be able to show off their products and services as a reminder that the borough that was once home to a flourishing factory economy – including some of the most productive sweater manufacturers in the nation – is home to a network of successful small businesses.

“This expo was an exceptional platform for American-owned companies in Queens to showcase their talents and wares,” said Meng, a member of the U.S. House of Representatives Small Business Committee who wasn’t able to attend the event because she was tied up in Washington D.C. for the debate over the federal budget. “Local residents who attended were able to see firsthand the outstanding American products that are made right here in our great borough, and I think all who came out for it.”

Liana Shemper, who has run an art school in Kew Gardens for 23 years, exhibited a number of her paintings, from pieces depicting rural desert landscapes in Argentina to a jazz musician and a series of dancers in the midst of salsa, samba, swing and flamenco moves.

“I’ve focused more on my school than selling paintings, but I’d love to sell paintings because I have no more space in my house,” laughed Shemper, a Ukrainian immigrant who studied art as a child in her home country and who began teaching not long after she moved to the U.S. as a high school student. She opened Liana’s Art School at 119-37 80th Rd. in Kew Gardens more than two decades ago and has since taught pupils of all ages and abilities.

David Yale, an author living in Bayside, spent the afternoon speaking to fair goers about his comedy books, including the most recently published “HomesPun Humor: Original Puns, Word Plays and Quips: A Compendium of Guffaws, Giggles and Mirth.”

Yale, who began working on his first book of puns in the 1990s, said while he hasn’t written humor all his life – he has punned for as long as he can remember.

“I had a job where I didn’t get recognized, but I punned and could make people laugh – I realized something could come from that,” Yale said.

The founder of the Ridgewood Market, Sarah Feldman, displayed an eclectic array of goods that represented what is sold at her event that has landed interest from vendors – everyone from, as Feldman said, “a honey guy” to “a beer guy” to an “antiques guy” – throughout the borough, as well as thousands of customers. 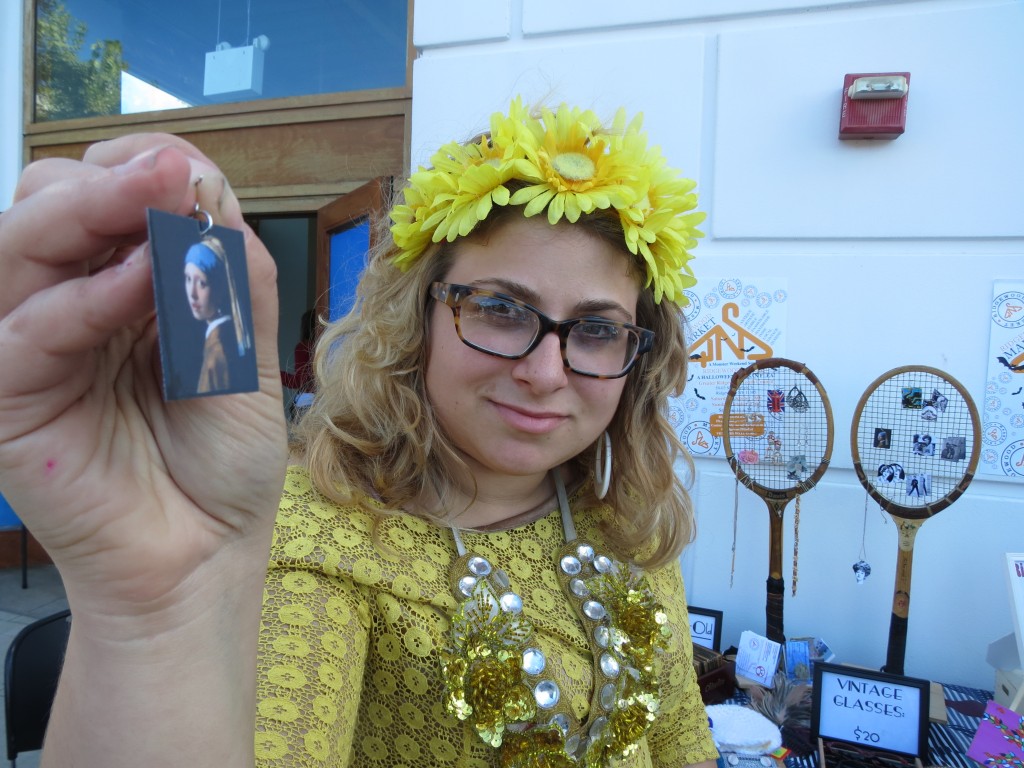 Ridgewood Market founder Sarah Feldman shows off one of the earrings she made. Feldman sold earrings, as well as a variety of other eclectic goods, at the Atlas Park event.

“All the vendors who come, they’ve become friends and there’s a lot of networking that goes on,” said Feldman, who sold earrings she made at Saturday’s event. “It’s helping to build local businesses in Queens.”

“Blanca’s a cancer survivor, so she really wants to help people change their way of eating,” Salvio said. “We’ve worked together for a long time, and it’s incredible the things she can make.”

Angelica Harris, a Glendale author and founder of the Excalibur Reading Program, spoke to those at the fair about her nonprofit, which works with a variety of children, including those with special needs and at-risk populations. Meanwhile, Briarwood artist Sandra Vucicevic enlisted attendees to participate in an art project that she will present from 6 p.m. to 9 p.m. on Oct. 26 at the Studio 34 Gallery, located on the four floor at 34-01 38th Ave. in Long Island City.