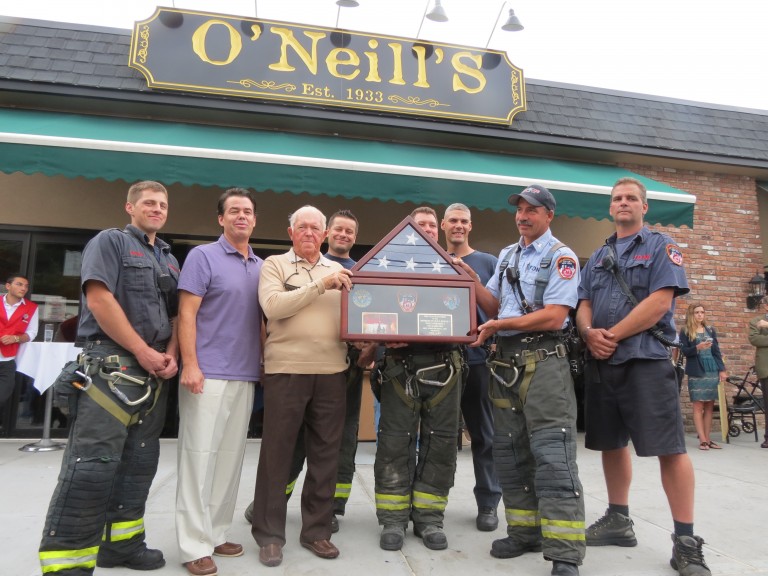 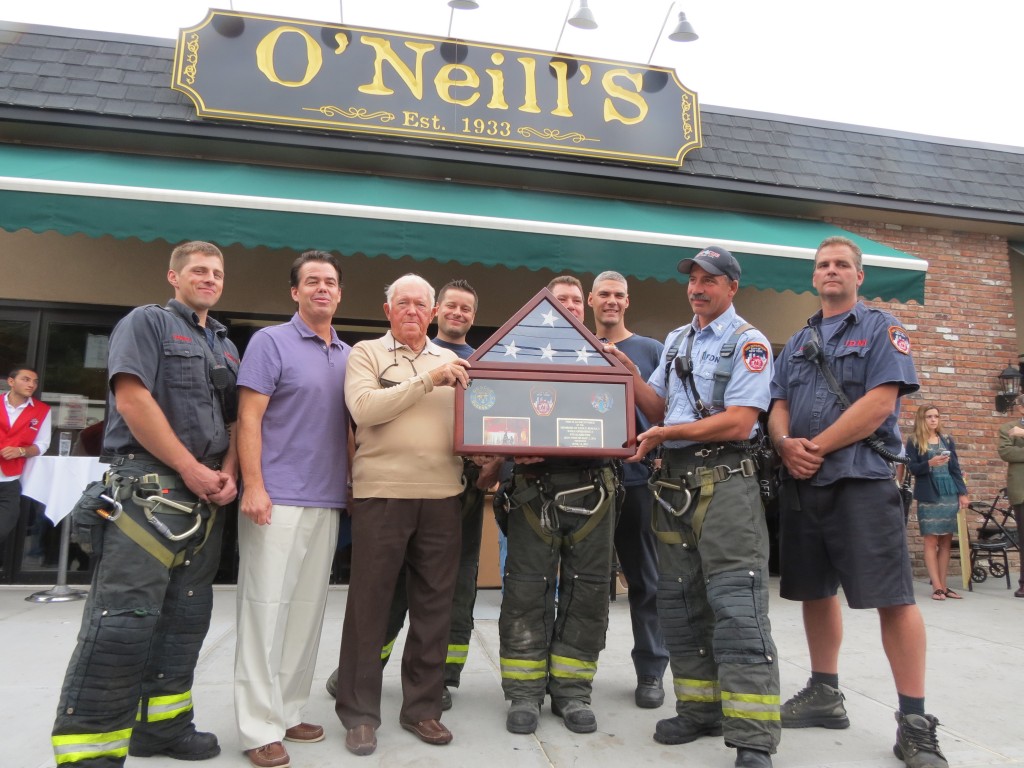 O’Neill’s owners George O’Neill, third from left, and Danny Pyle, second from left, celebrate the reopening of their beloved restaurant and bar in Maspeth alongside members of Rescue 4. The firefighters presented the O’Neill family with an American flag they saved while battling the blaze that destroyed O’Neill’s in 2011. Anna Gustafson/The Forum Newsgroup

Sitting by the entrance to the Maspeth bar that has been in his family since 1933, George O’Neill greeted a nearly nonstop stream of customers who rushed towards him last Friday to say the same thing: Welcome back. We have missed you.

“Everybody wants to come here,” Maspeth resident Mike Savage said of O’Neill’s, which was destroyed by a massive fire in 2011 and held its grand reopening celebration at the end of last week. “Families come here and gather and get together. I grew up hanging out here, and my kids hang out here now. We’re really happy it’s back.”

A community mainstay for decades, O’Neill’s has played a role in the neighborhood that residents said can only be filled by the beloved Maspeth eatery. It is a place that has had Mets players tend bar and has held fundraisers for the spouses of police officers killed in the line of duty, has been the site of marriage proposals and parties celebrating everything from birthdays to christenings, and has, in general, been a constant source of community and strength in a world that can otherwise seem to change far too quickly.

So, when a blaze erupted and destroyed O’Neill’s building at 64-21 53rd Dr., residents throughout the neighborhood – and beyond – were devastated.

“People would always tell me how much they missed it,” said George O’Neill, who owns the restaurant and bar with his son-in-law, Danny Pyle. “We’re very happy about today, about being back.”

Firefighters from Maspeth’s Rescue 4 were also at last Friday’s festivities, during which they presented the O’Neill family with an American flag they saved while fighting the fire a little more than two years ago.

“This is a great neighborhood place,” said Rescue 4 Capt. Joe Gandiello. “It’s the fabric of this neighborhood.

“They even make great pizza here – and that’s coming from an Italian in an Irish place,” Gandiello laughed.

Pyle echoed his father-in-law’s sentiment about finally being able to return to the place they love most. 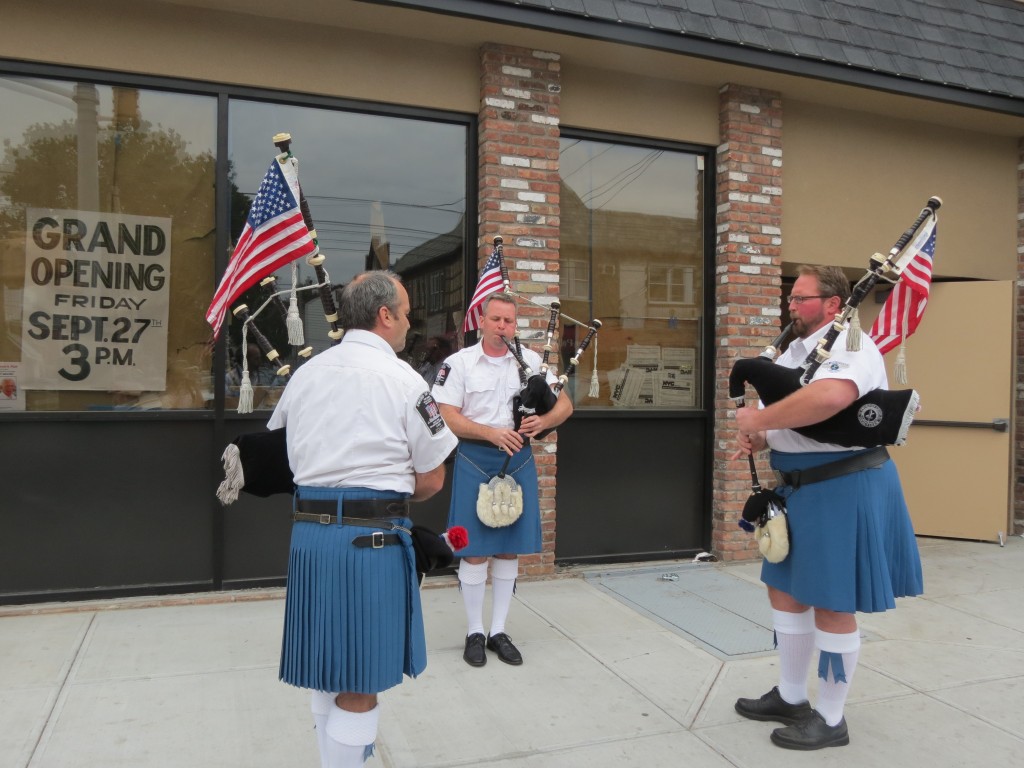 “We’re thrilled to be back,” Pyle said as waiters and waitresses rushed by him in a dizzying swirl of buffalo wings, burgers and beers. “O’Neill’s has been here since 1933, and it’s a real family atmosphere. We’re lucky enough to see people grow up here.”

Originally opened by O’Neill’s father, also named George O’Neill, under the name the Plateau Tavern, the restaurant has gone from being a 15-foot-wide, 40-foot-long spot to a wildly popular hangout for everyone from neighborhood regulars to members of the 1986 Mets team that clinched the World Series.

“They ran out of their locker room and to O’Neill’s, and people came in and said, ‘Wait a minute – are those the Mets tending bar?’” O’Neill said in previous interview.

Throughout the years, as the Plateau Tavern evolved into O’Neill’s, the establishment would do more than flip burgers and serve up cold beers – they held fundraisers for countless causes, including to help neighbors foot medical bills and for widows whose husbands were cops killed while serving their city, and they sponsored many sports teams, from Little Leagues to softball and basketball.

“And people come work here and we see them go on to become doctors and lawyers,” O’Neill said. “We’re talking hundreds and hundreds of people who have worked here. We’re proud of them.”

While much is new in the bar – including a mahogany bar, 60 television screens that routinely play sports games, a dining area and a party room – O’Neill’s will continue to be a family-run business that garners the love of many a Queens resident.