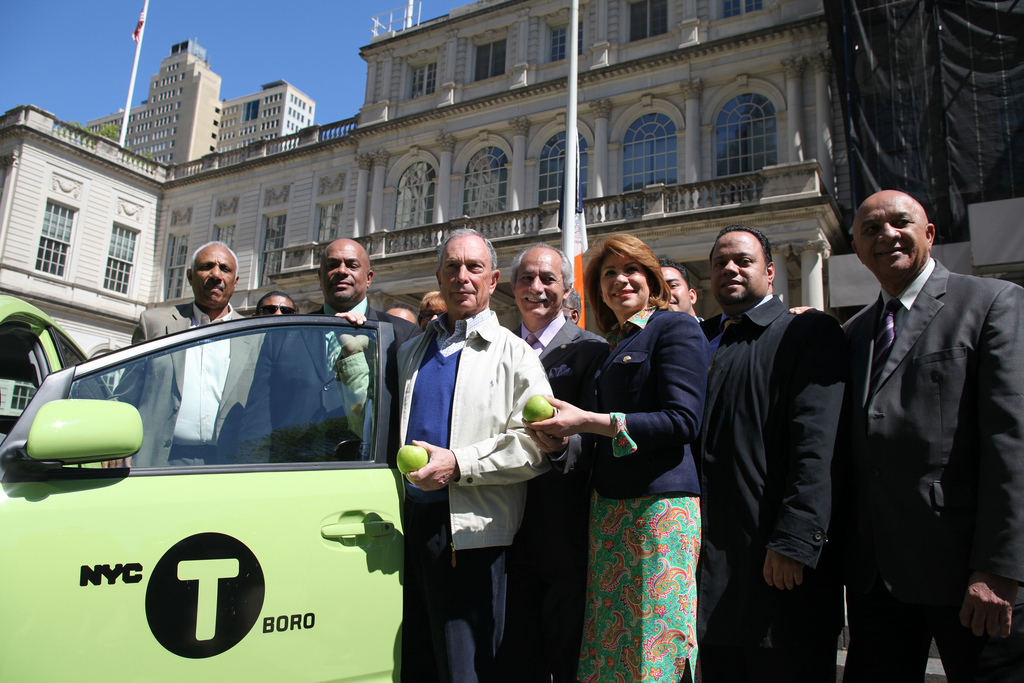 Mayor Bloomberg and other city officials announce in April that green taxis will be permitted to pick up street hails throughout the city. Photo Courtesy NYC

Forest Hills and Rego Park citizens are using the five borough taxi program but some residents raised concerns at a Community Board 6 meeting last Wednesday about the cabs’ lack of regulation enforcement as compared to traditional yellow taxis.

In an attempt to reach the outer boroughs with legal and accessible taxi services, the city Department of Transportation has created the all-borough taxi, which is like a yellow cab but light green in color and can pick up street hails anywhere in New York, except in an exclusion area south of East 96th street and West 110th street in Manhattan.

Prior to the advent of the boro taxi, 97 percent of street hail pickups were made in that exclusion area, neglecting the rest of the city, including upper Manhattan, the Bronx, Queens and Brooklyn.

Erika Leyva of New York’s Taxi and Limousine Commission said that Community Board 6 has so far had 6,317 street hail pickups, “which is a lot of pickups.”

The boro taxi is regulated in the exclusion area by having a meter that automatically shuts off. When the meter is shut off they should not pick up street hails. Otherwise the all-borough taxis are, by law, supposed to run their meter when they pick up street hails. They also are only allowed to do prearranged pickups at the airports. The boro taxis have all the same features as a yellow cab, including a meter, a roof light, a GPS unit and a credit/debit card reader.

Despite regulation, some of the initial feedback from Forest Hills residents includes concerns about drivers not abiding by the laws.

One individual at last week’s CB 6 meeting, who takes taxis regularly, said, “a lot of green cabs do not run their meter 50 percent of the time.” She said that she must check with each driver to see if they will use the meter.

The green taxis have permits that cost $1,500 plus a $530 dollar inspection fee each year for the next three years. Levya said that as of Oct. 8 they had sold more than 3,000 permits out of the 18,000 permits they will eventually give out in three issuance periods.

“There is no enforcement of the law,” said

CB 6 Chairman Joseph Hennessy, who owns the $1 million yellow medallion as a veteran cab driver.  “The yellow cabs are alongside the green cabs alongside the black cabs. How can you make sure the meter is on?”

Levya said enforcement has gone up significantly in the last year and individuals can report any misconduct in regards to transportation services within New York City. She said the city is making sure that residents are educated on the topic.

“We are trying to reach as many passengers as possible,” she said. “So far we are using subway ads and bus ads.”