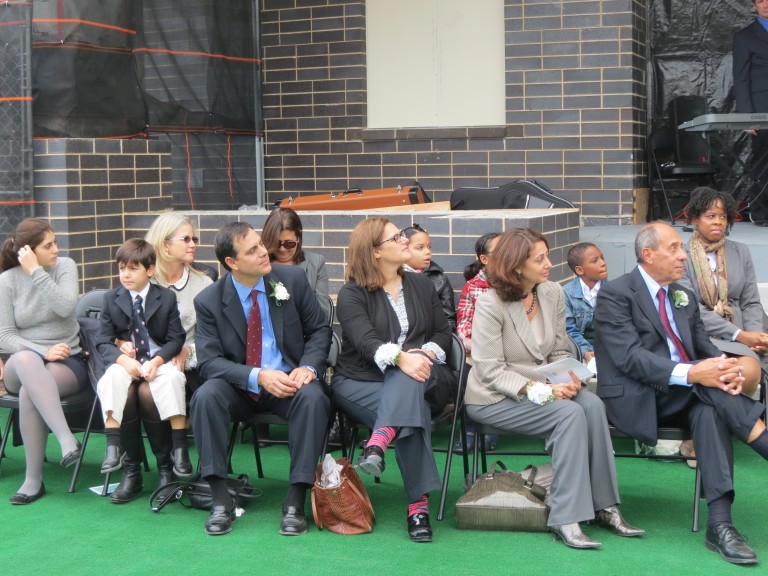 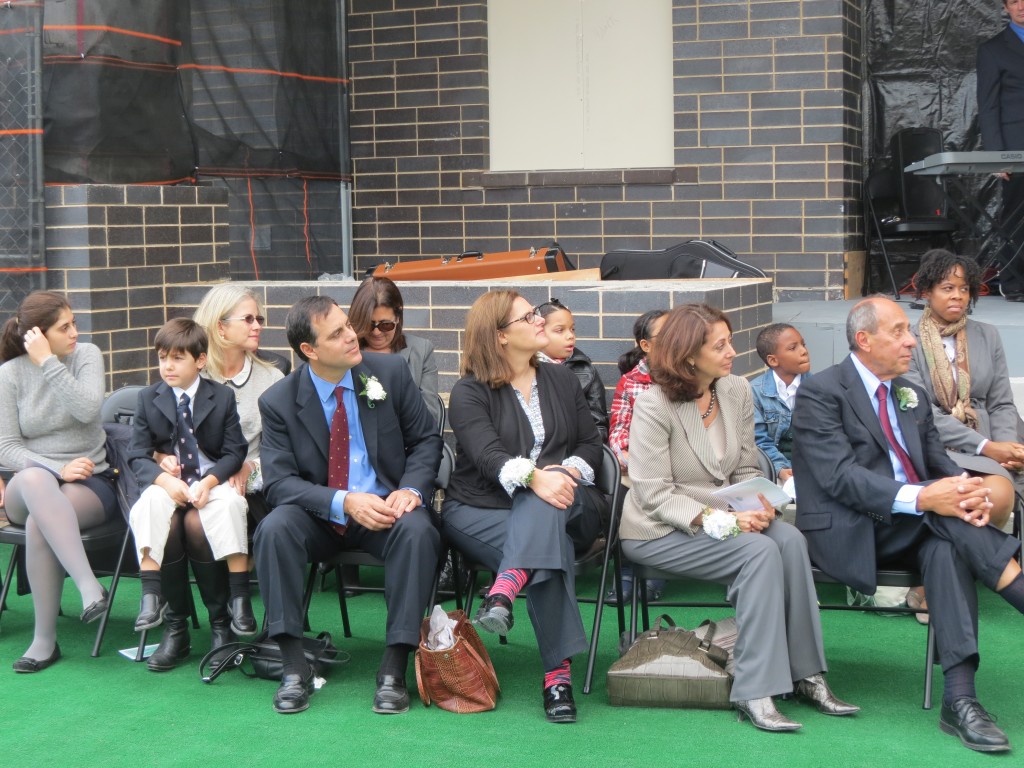 “If my wife were here, she would have danced,” John Zaccaro said at Tuesday’s ceremony dedicating a Ridgewood school to Geraldine Ferraro, a longtime Forest Hills resident who smashed the political glass ceiling and became the first female vice-presidential candidate from a major political party.

Speaking to the Grover Cleveland High School band that played at the dedication ceremony at the new Geraldine A. Ferraro Campus – which will house the A.C.E. Academy for Scholars, previously known as PS 90 beginning in 2014 – Zaccaro smiled as he explained how moved his wife, whom he married in 1960 and who died in 2011 at the age of 75 following a long battle with cancer, would have been had she witnessed a school being named after the former teacher, criminal prosecutor, and Congresswoman.

“As a former public school teacher, she’d be so happy,” Zaccaro said of Ferraro, who launched her career in education at PS 85 in Astoria – part of the district she would later represent for three terms in Congress before being tapped for the historic bid for vice president.

Remembered as a woman who inspired countless others to kick down the “Men Only” signs, Ferraro had a deeply ingrained respect for education, her husband said.

“It enabled her to rise out of poverty…to reach unimaginable heights to make history,” Zaccaro said at the ceremony that was attended by members of his family – including his daughters Donna and Laura and son John – and a wide array of legislators, including City Council Speaker Christine Quinn (D-Manhattan), and education officials, including city Schools Chancellor Dennis Walcott, Deputy Chancellor Kathleen Grimm and School Construction Authority CEO Lorraine Grillo.

“She would’ve loved that this school was in Queens,” Zaccaro said. “She moved to Queens after college, and we raised our family in Queens.”

The new Ferraro campus is expected to open in September 2014 and will be located at 55-20 Metropolitan Ave., just a few blocks from the late Congresswoman’s district office.

The $46 million five-story school, currently under construction, will have 616 seats serving pre-kindergarten to fifth grade. It will include two playgrounds, a gymnasium that will also serve as an auditorium, a second gymnasium, library, kitchen and cafeteria, 23 classrooms, and seven special education classrooms with a separate therapy room. The building will also include a science room and a science lab. 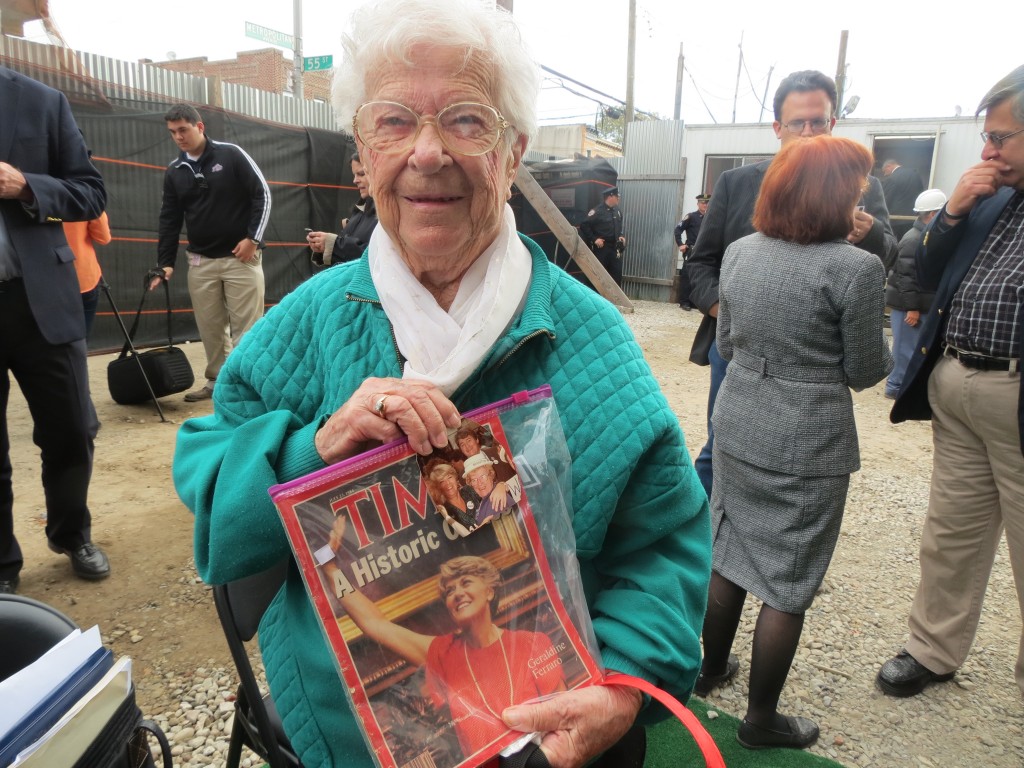 Longtime political leader Gertrude McDonald, 97, shows a picture of herself with Geraldine Ferraro, whom she knew for decades, and a copy of Time magazine announcing Ferraro’s historic bid for vice president in 1984.

“This is the first new school built in Ridgewood in probably 85 years,” said Assemblywoman Catherine Nolan (D-Ridgewood), who knew Ferraro well and spearheaded efforts to build the school and name it after the former political leader.

Nolan, like many of those who spoke, noted how Ferraro helped to change the country’s political and social landscape.

“When she began teaching, there wasn’t a female principal in the district,” Nolan said. “We were very privileged to have a woman in the tradition of Gerry Ferraro.”

Walcott said he hopes the building will long be a reminder of a congresswoman who “dedicated her life to public service.

“She was at trailblazer and an inspiration to children and adults around the country,” Walcott continued.

Noting that Ferraro inspired her longtime partner, Kim Catullo, to believe she could pursue law, Quinn went on to say that “many of us would’ve never…accomplished the things we’ve accomplished if it wasn’t for Gerry Ferraro.”

She was, Queens Borough President Helen Marshall said, the “one to crack the political system in Queens.

“After that, we all came in,” Marshall laughed.

Another political trailblazer in Queens, 97-year-old Gertrude McDonald, was the first woman to run for public office in Queens – and while her 1968 bid didn’t end in victory, it did open the door for others to question a system dominated by men.

McDonald went on to know Ferraro well and said she was consistently inspired by the former legislator.

“It was a time when men were the power,” McDonald said. “There was no such thing as a woman in politics.”

But, the 97-year-old said, then Ferraro appeared – and the country changed.