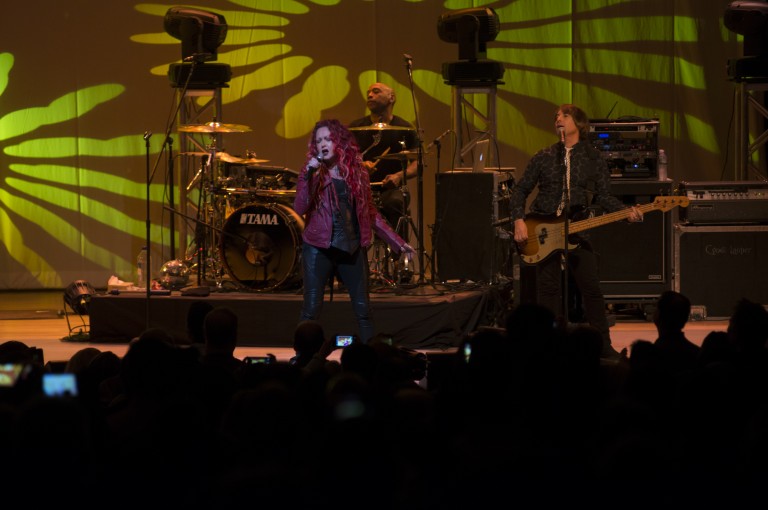 Cyndi Lauper, who grew up in Ozone Park, may be 30 years older than she was when her debut album came out – but if her concert at Queens College on Sunday proves anything, she can still bring a screaming crowd to its feet. Kate Bubacz/The Forum Newsgroup

“They said sing with your accent; I said, ‘what accent?’” Cyndi Lauper says in a thick Queens accent at the Colden Center at Queens College. She is telling the crowd the back-story of her admirably long career. They know exactly what she is talking about and she knows it; this is her hometown and it’s a family reunion of sorts, even if its just for a night. The performance is part of the tour celebrating the 30th Anniversary of her debut album “She’s So Unusual.”

The audience is a little grayer, a little tamer and a little rounder than it was when Lauper first released the album in 1983. The majority of ticket holders stayed seated through the opening act, an all-girl punk-rock band called Hunters Valentine, clapping politely as if they were at a kid’s recital instead of a concert.

All that changed when Lauper – who was raised in Ozone Park – came onstage in loud pink hair and leather pants: She looked good. The energy level immediately rose two octaves as everyone leapt to their feet, phones aloft, screaming for Cyndi.

“The last time that I was here, my mom was in the audience, as she is tonight, and it was to get my honorary high school diploma.” Lauper says. “She got me a corsage. So silly. 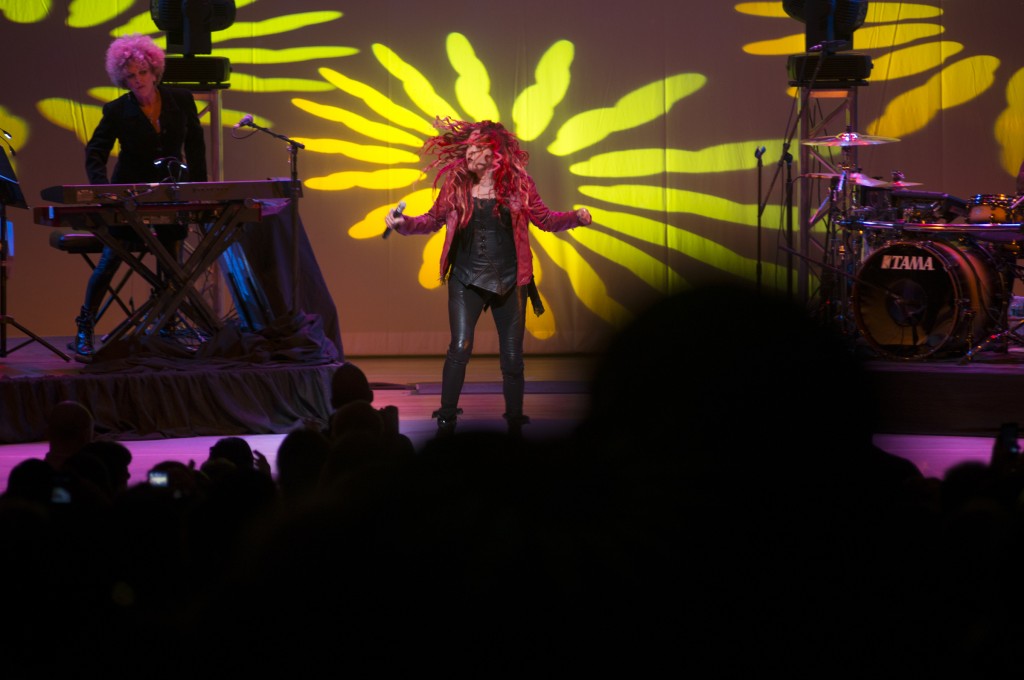 The last time Cyndi Lauper said she was at Queens College, it was to receive her high school diploma. On Sunday, she entertained a thrilled crowd – which included her mother – at the school to kick off her tour celebrating the 30th anniversary of her debut album, “She’s So Unusual.”

“But high school is important,” the rock star concedes. The crowd roars in approval.

Lauper – who turned 60 in June – starts out with “Money” and goes right into “Girls Just Wanna Have Fun.” She can still hit the high notes and hold a stage – it may not be Madison Garden, but it’s definitely a rock concert.

Many of the audience members look old enough to be the mothers of high schoolers and several have small children with them. More than a few are seeing Lauper in concert for the first time despite being longtime fans.

Jen Willis, of Jackson Heights, is one of the younger audience members who had never seen Lauper live before.

“It was great” she says of the show. “The only reason that we are leaving [early] is because of her,” she says, gesturing to her five-year-old daughter.

Bill Anderson of Long Island came out to see the show with friends. He had seen Lauper in concert twice before and had bought “She’s So Unusual” when it first came out “on cassette,” he says with a laugh.

“I love that she’s taking it easy tonight, talking to us, telling us about each song,”

says Deana Shoemaker, who is rocking purple hair. She has always been a fan of Cyndi, and saw Lauper twenty years ago in Texas, and more recently, at the Tony awards when Lauper was receiving her award for the musical “Kinky Boots,” which Shoemaker’s husband works on.

Of the musical, Holly Murphy says to her best friend, Alessandra Datri, “seeing that is our next venture.” The two were fans of Cyndi growing up and had made the trip from Bay Ridge to see her in concert for the first time. Datri had gotten Murphy tickets to the shows as a part of a larger gift – a night off from acting as caregiver to her uncle, which Murphy had been doing since March. Her uncle passed earlier in the week, but the two decided to go to the concert anyways, even though the wake was the following day.

“She was worth it,” Datri says.