In Queens, the storm raised the question of what it means for a community in dire circum­stances akin to Sandy to have just one hospital.

Elected officials, including Assemblyman Phil Goldfeder (D-Rockaway Park), civic lead­ers and hospital staff have, over the past year, voiced a wide range of concerns about St. John’s being the sole hospital on the peninsula, often citing worries that should St. John’s, which is facing financial woes, close, Rockaway residents could be trapped with no hospital should a storm like Sandy happen again. During Sandy, bridges to the Rockaways were inaccessible – what, residents asked, would have happened if St. John’s was not available to them? 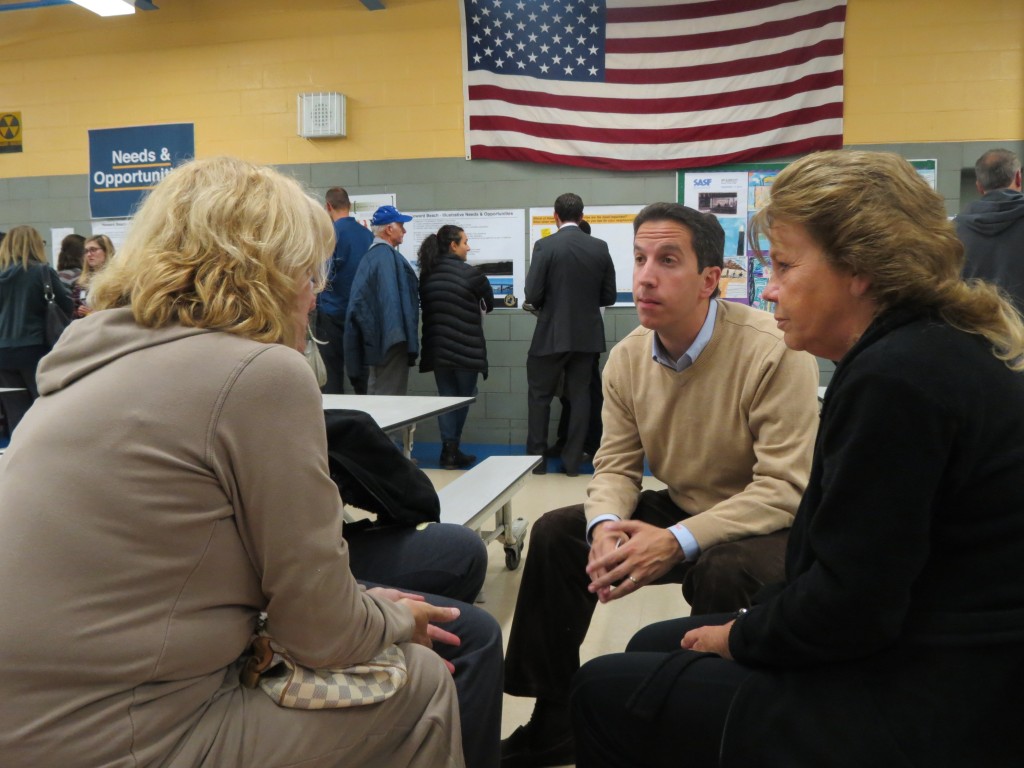 Assemblyman Goldfeder speaks with a number of Howard Beach residents at a recent meeting of the Howard Beach chapter of New York Rising about a variety of concerns they have following Sandy. In addition to insurance costs, residents said they worried about access to health care during disasters.

“In the aftermath of Superstorm Sandy, St. John’s Hospital’s services were crucial for our community, and they continue to be an essen­tial resource for our families,” Goldfeder said in a prepared statement.

Kevin Finnegan, political director for 1199SEIU, too advocated for additional fund­ing to be designated for St. John’s.

“These resources can help support a vital healthcare institution in a community still reel­ing from the storm,” Finnegan said in a prepared statement.

Almost immediately after the worst of San­dy passed, St. John’s issued a statement saying it was operating at “full capacity, meeting patient needs under challenging conditions.”

“Staff continues to work, despite personal losses of homes, cars, electricity, transportation, and fuel, demonstrating incredible commit­ment and dedication,” the hospital said on its website.

In an attempt to fill the vacuum of health care services, the nonprofit group Doctors Without Borders began working in Rockaway alongside area community groups. A team of two doctors, a nurse-practitioner, a mental health specialist, a nurse, and logistical staff established a tempo­rary clinic in a community room in an Arverne housing complex immediately after the storm and treated patients with such conditions as hy­pertension, asthma and congestive heart failure.

Other South Queens residents have voiced concerns about not only St. John’s – but about limited access to health care facilities in general during Sandy.

“If people need to get to the hospital be­cause their power has gone out and they rely on that for medical treatment, what happens?” asked Howard Beach resident Valerie Messana at a recent meeting of the Howard Beach chap­ter of New York Rising. “You couldn’t drive any­where during Sandy; there was no power – these are questions people need to answer.”