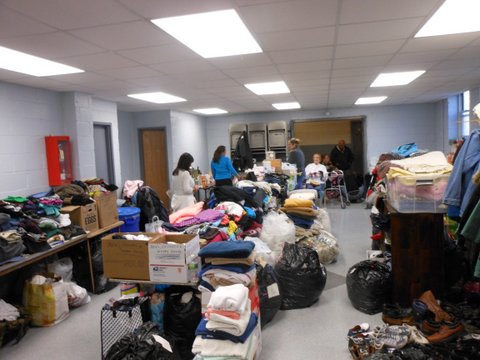 The Lindenwood Alliance worked with Ellen Buonpastore and others in the neighborhood to provide clothing and food for residents who had lost everything in the storm. Photos Courtesy Joann Ariola

Still, South Queens residents had been through plenty of hurricane warnings before. They had seen Hurricane Irene come in with a lot of hype and go out with little damage, and people were expecting much of the same this time around.

But Ariola wanted to be prepared: She wanted to give the bags filled with necessities to residents throughout the neighborhood – particularly seniors who could be stuck in their homes.

“We were going around and giving them to people who couldn’t get out – just in preparation, never dreaming it would be as bad as it was,” Ariola said.

Then, the storm started. It didn’t look like much at first – but come around 7:30 p.m. on the worst night of Sandy, Ariola looked out the window of her mother’s house on 164th Avenue and saw the beginning of the flooding that would devastate much of Howard Beach, leaving people without the homes in which they had lived for decades, without power, without clothing, without almost anything except for what was on their backs.

“There was an absolute river running down the avenue,” Ariola said. “We knew then that this was bad. We had the television on until the point that it was reported that Breezy Point was on fire, and then we lost television contact.”

Almost immediately, Ariola and her son, Christian, hopped in a car to begin contacting residents about making storm preparations.

“Councilman Ulrich was also knocking on doors, telling people who hadn’t heeded the evacuation to get out,” Ariola said. “The councilman and I were in constant contact – where are you, in what area, a person on 84th Street needs that packages that we made. We were going back and forth dropping the packages off. Meanwhile, the water continued to rush in, and it got to the point where we couldn’t use our cars anymore and you could no longer reach anyone anywhere.” 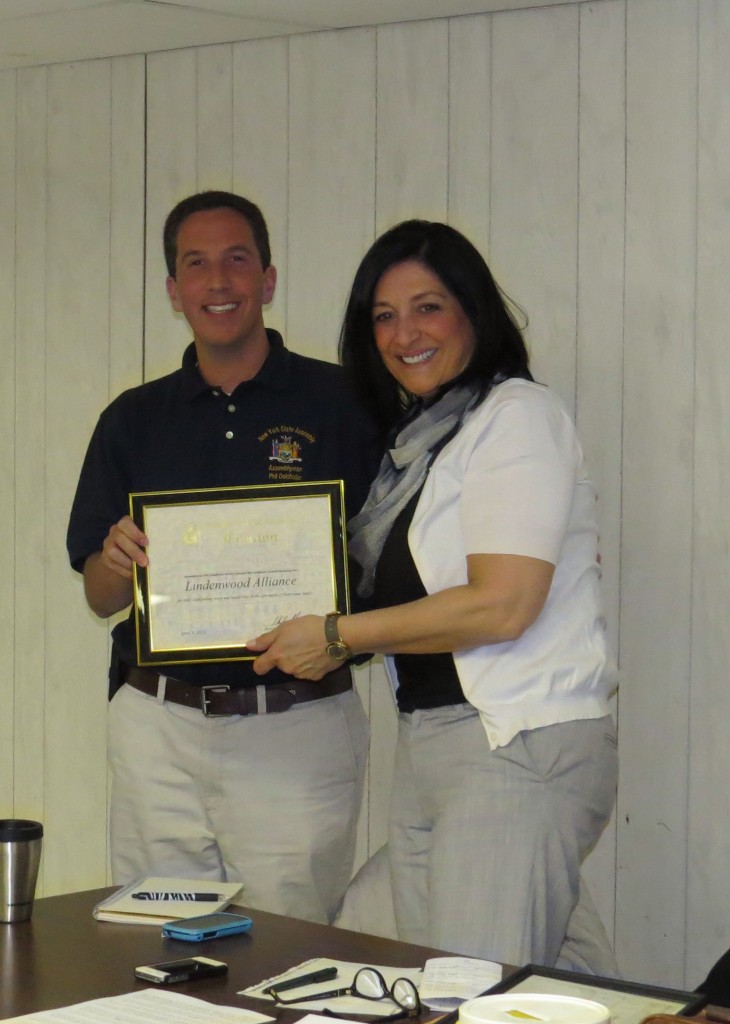 Joann Ariola and the Lindenwood Alliance were recognized by Assemblyman Phil Goldfeder for their monumental efforts to help residents during and after Hurricane Sandy.

Once Ariola and her son could no longer drive because of the flooding, they parked the vehicle on 83rd Street and trekked in knee-high water back to her mother’s house.

That night, as almost everywhere else in Howard Beach – and much of South Queens and the Rockaways – lost homes and power and heat – there was a circle in Lindenwood that, miraculously, did not lose electricity. An area dotted with high rises – the part of Lindenwood that sees 151st Avenue meld into 153rd and finally 155th between 88th and 89th streets – became an “oasis in the midst of devastation,” Ariola said.

“We immediately opened the doors to anyone,” the civic leader said of residents in the Eastwood Houses, where she lives, as well as those in the Dorchester Apartments. “People we didn’t know were coming into apartments just to take showers – they had nowhere to go, but we opened up our homes.”

The Lindenwood Alliance worked with Ellen Buonpastore at the Dorchester Apartments to provide clothing and hot meals out of the Dorchester’s recreational room.

“It was really amazing – she turned that community room into a shelter for anyone,” Ariola said of Buonpastore. “It had coats, shirts, shoes; people were coming because they didn’t have one article of clothing left.”

Additionally, the Alliance’s Facebook page became one of the central points of information for residents immediately following the storm, and Ariola said she would post any information she received from Ulrich, Assemblyman Phil Goldfeder, the mayor’s office, and others.

Those first days following the storm soon bled into weeks and months – throughout which the Alliance worked with numerous other community groups, including the Howard Beach Kiwanis Club, The Riverfund, the Rotary Club of Southwest Queens, and a variety of area businesses, including Ragtime and Tuscany Deli, to get people’s lives on a path back to normalcy.

For Thanksgiving, Ariola worked with the Riverfund, Howard Beach Kiwanis, St. Helen’s, Tuscany and Ragtime, among others, to provide Thanksgiving meals – everything from 30-pound turkeys to sweet potatoes and corn – to 100 families. There were 50 turkeys left over, which Msgr. Alfred LoPinto used to feed the residents from the Howard Beach Senior Center who were operating out of St. Helen’s following the storm.

“People came with children, and everyone was so excited and so thankful,” Ariola said of those receiving the Thanksgiving meals.”

At Christmastime, the Alliance worked with Tuscany Deli to conduct a toy drive so that “every child had not just one toy but a sack of toys,” Ariola said.

“We held an event at the Lindenwood shopping center, and Charlene and Michael O’Dea from Hamilton Beach came out to play Mrs. Clause and Santa,” Ariola said. “They had lost their home and still came out that day – this is the type of resiliency, commitment and love the people of Howard Beach and the surrounding communities have for each other.”

As Hurricane Sandy fades from memory, Ariola said the Alliance will continue to do what it has done in the aftermath of the storm – and for as long as the group has existed: Lend a hand to anyone in need.

“I think Hurricane Sandy taught us anything material can be replaced, and when you have to tie a rope around your children and then onto yourself and pull them from your house, it makes you realize that it doesn’t matter if your house burned or had water damage – it matters that everyone you love is still with you,” Ariola said.