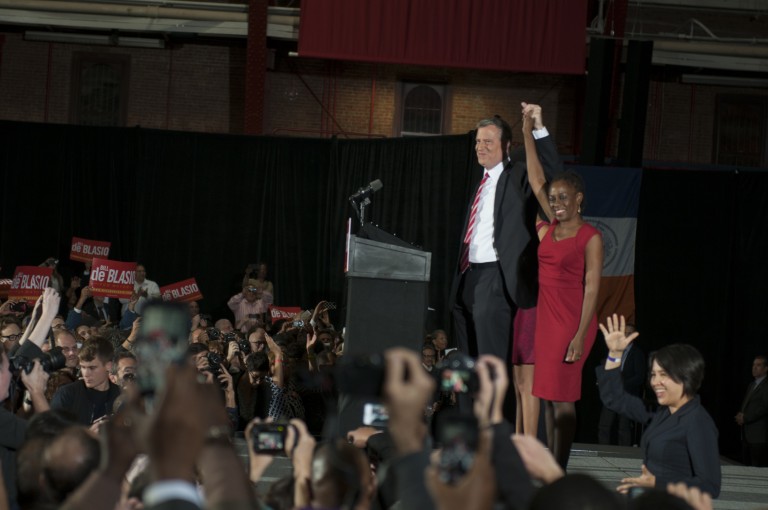 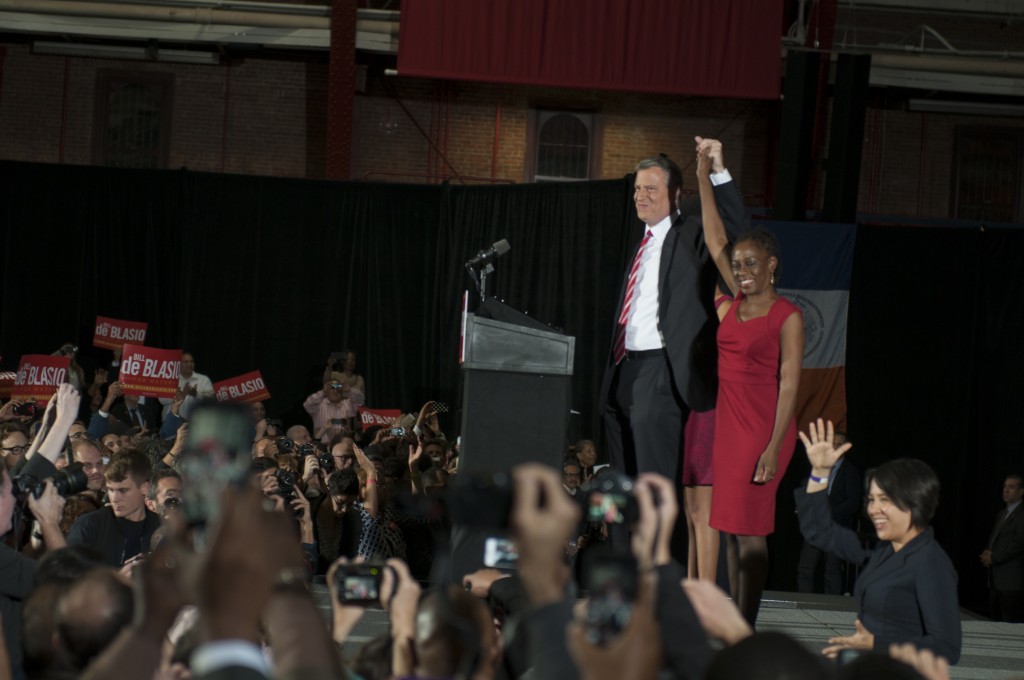 The first new mayor in 12 years, de Blasio, the city’s public advocate and a former councilman from Brooklyn, pummeled Lhota, the former chairman of the Metropolitan Transportation Authority, in the polls, landing 73.6 percent of the vote following the Democrat’s campaign focusing on a promise to even the city’s financial playing field, which many have felt widen over the years. 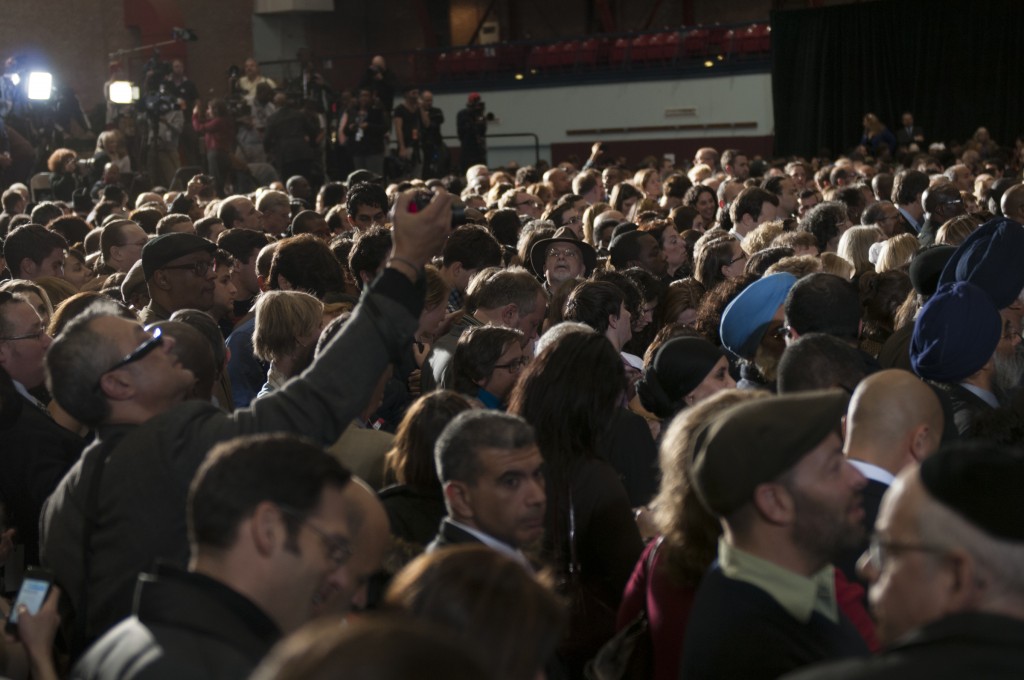 “My fellow New Yorkers, today you spoke out loudly and clearly for a new direction in our city, united by a belief that our city should leave no New Yorker behind,” de Blasio told a jubilant crowd at his campaign party in Park Slope Tuesday night. “…But let me be clear. Our work – all of our work – is really just beginning. And we have no illusions about the task that lies ahead. Tackling inequality isn’t easy; it never has been and never will be. The challenges we face have been decades in the making, and the problems we set out to address will not be solved overnight.”

While many have said that Lhota’s defeat has more to do with a repudiation of the mayor’s policies, including a frustration with aggressive policing, than with Lhota himself, the Republican stressed in his concession speech at the Gansevoort Park Avenue Hotel in Manhattan that crime is at a historic low at the end of Bloomberg’s tenure. After quieting the boos that erupted when Lhota brought up de Blasio’s name, the candidate expressed solidarity with the mayor-elect.

“We are one city,” he said. “We all want good paying jobs. We all want a strong quality of life. We want our city to move forward.

De Blasio’s sweeping victory followed a rapid rise in public opinion, with the candidate emerging from a packed field of primary election contenders – including Council Speaker Christine Quinn (D-Manhattan), once considered by many to be the next mayor, former Comptroller Bill Thompson, and former U.S. Rep. Anthony Weiner – as the front-runner who seemed to capture a city angry with income inequality, the NYPD’s stop and frisk program, and little in the way of affordable housing. 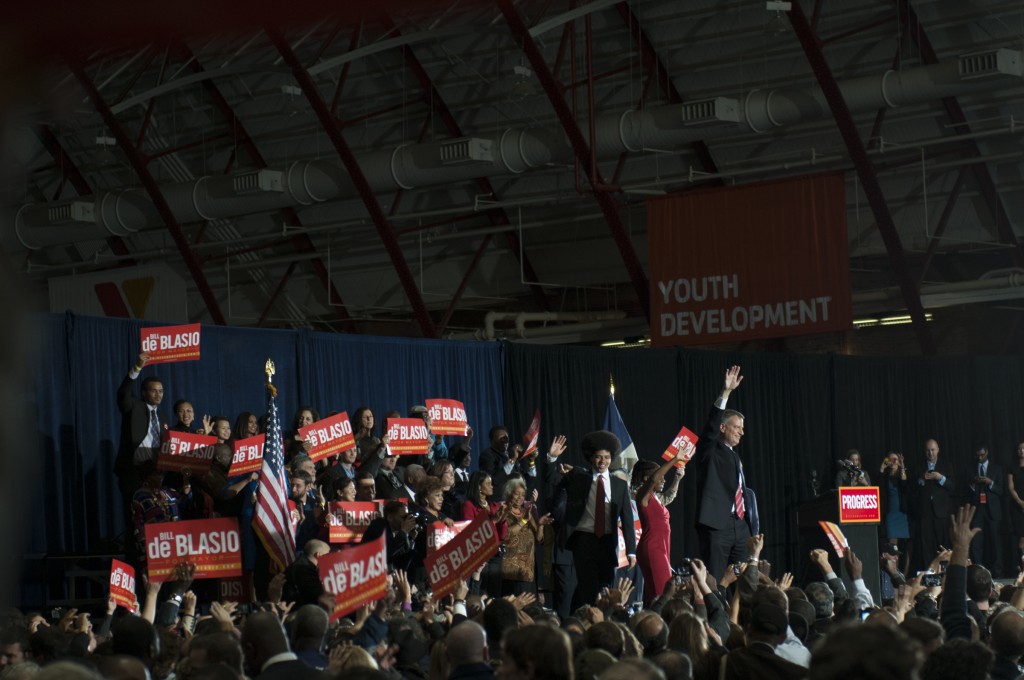 The de Blasio family walks onstage at the victory party in Brooklyn. De Blasio was joined by his son, Dante, wife Chirlane, and daughter Chiara at the soiree.

Following September’s primary, his campaign gained momentum and culminated when de Blasio was announced as the projected winner immediately after the polls cosed at 9 p.m. His victory was so inevitable that the only people in the Park Avenue Armory YMCA to cheer the results were the press corps. The doors opened shortly thereafter and about 2,000 well wishers, volunteers and community advocates from all backgrounds filed orderly into an area in front of the stage to await the new mayor.

“We have been with the campaign since the beginning,” said Jagajit Singh of Richmond Hill. “We want to see Bill cross the threshold and see him become mayor.”

Alison Sesso of Forest Hills, volunteered for the campaign in Queens and showed up to watch the results come in.

“I’m looking forward to the future,” she said. “There are a lot of issues in the city, and I think that he’s got the right vision to get us out.”

The mood in the room was patient, quiet even for a victory party for a campaign that had been far from certain as recently as August and has promised a sweeping change of pace in a city that some saw as turning into a playground for the well-off and well-connected.

Joel Giambra, a lobbyist from Buffalo, New York and a friend of Bill de Blasio’s who helped on his campaign said, “I think he’s going to shock a lot of people when he begins to govern from the middle.”

“There was Republican rule for a long time, and the people of New York City are ready for something different,” Giambra says.

Joe Lhota landed just 24.3 percent of the vote, though the Republican candidate had a large number of supporters in places like Maspeth, where he is pictured here meeting supporters at O’Neill’s. File Photo

Kevin Mckessey of East Flatbush, Brooklyn, said he was ready for that change to be made. McKessey had volunteered for de Blasio’s campaign when he has running for public advocate, but volunteered for Comptroller and former Democratic mayoral candidate John Liu during the primary campaign. He supports de Blasio, but said, “I hope that he can keep his promises with the minority populations, getting them better access to education and jobs and community-based programs.”

People from throughout the city also gathered to support Lhota, and, as Journey’s “Don’t Stop Believing” blared from the sound speakers,

As Journey’s “Don’t Stop Believing” blared from the sound speakers for Lhota’s introduction at his campaign party, supporters conceded that their candidate’s defeat could stem from an anti-Bloomberg sentiment.

“It might be anti-Bloomberg, I don’t know,” Lhota supporter Jason Lerman said. “It’s tough for one party to win six terms in a row.”

Tania Gartenberg attended the event wearing a black shirt emblazoned with “Team Lhota” in bright pink under her left shoulder. The Manhattan resident was not surprised by the final result, but she was still upset, a little bitter.

“He’s going to be a one-term mayor,” Gartenberg said of de Blasio. “I remember what the city was like 20 years ago. I remember when my friend’s dad was shot. I liked everything (Lhota) stood for.”

“De Blasio represents a turn back from all the progress we made,” he said. “We’re a safe city by design, by the policies put in place.”

Shortly after 10:30 p.m., the new mayor joined his wife, Chirlane, and childen, Ciara and Dante, on stage. After thanking the crowd, he acknowledged that the changes sought in the campaign will be slow in coming – but promised it would arrive.

“I’ve spoken often about a tale of two cities,” de Blasio said. “That inequality – that feeling of a few doing very well, while so many slip further behind – that is the defining challenge of our time. Because inequality in New York is not something that only threatens those who are struggling.”

The theme of two different cities resonated well with the diverse crowd listening intently to de Blasio’s victory speech, and he echoed their concerns, repeatedly saying that by tackling these differences, “that’s how we all rise together”.

“The best and the brightest are born in every neighborhood,” he said.  ”We all have a shared responsibility – and a shared stake – in making sure their destiny is defined by how hard they work and how big they dream, not by their zip code.”

“I will never forget that as mayor, I work for you.”

By Kate Bubacz and Ben Kleine