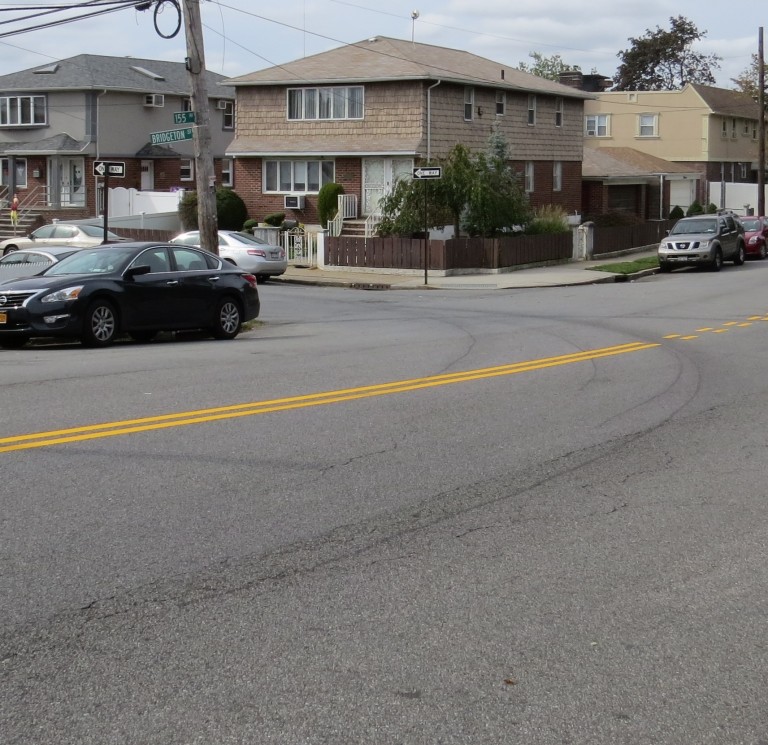 A group of Howard Beach homeowners will get the support of newly re-elected Councilman Eric Ulrich in their fight to remove unsafe conditions from their block –Bridgeton Street in Howard Beach–after having compiled and submitted a petition signed by nearly every resident on the street.

A few weeks ago, The Forum was contacted with regard to the speeding, recurring crashes and property damage and the dangers that pedestrians who cross the street there are facing.

Bridgeton Street lies at the foot of a small hill that leads away from the turn at Cohancy Street, and drivers round the corner there with increased speed and the inability to judge the turn correctly.

Residents say they have the answer—to reverse the direction of the street so that drivers would not be able to make the left turn off 155th Avenue onto their street.  “Often motorists turn onto the street at 40 mph or more…” the petition reads, “…the street is not suited for such speeds…Ideally, Bridgeton Street needs to be a one-way street in the opposite direction.”

And if the skid marks permanently embedded in the pavement at the streets entrance were not enough to support their quest, less than one week after having contacted the newspaper about the conditions, an 18-year-old pedestrian was struck at the intersection of Bridgeton and 155th Avenue.

“We will immediately send this petition with a letter from me,” said Ulrich, “so that a feasibility study can be done by DOT.” In addition to that, the matter would have to be reviewed by Community Board 10. “There is a legitimate concern over safety here,” said Ulrich, “and I will do everything I can to secure safe conditions at this location.”