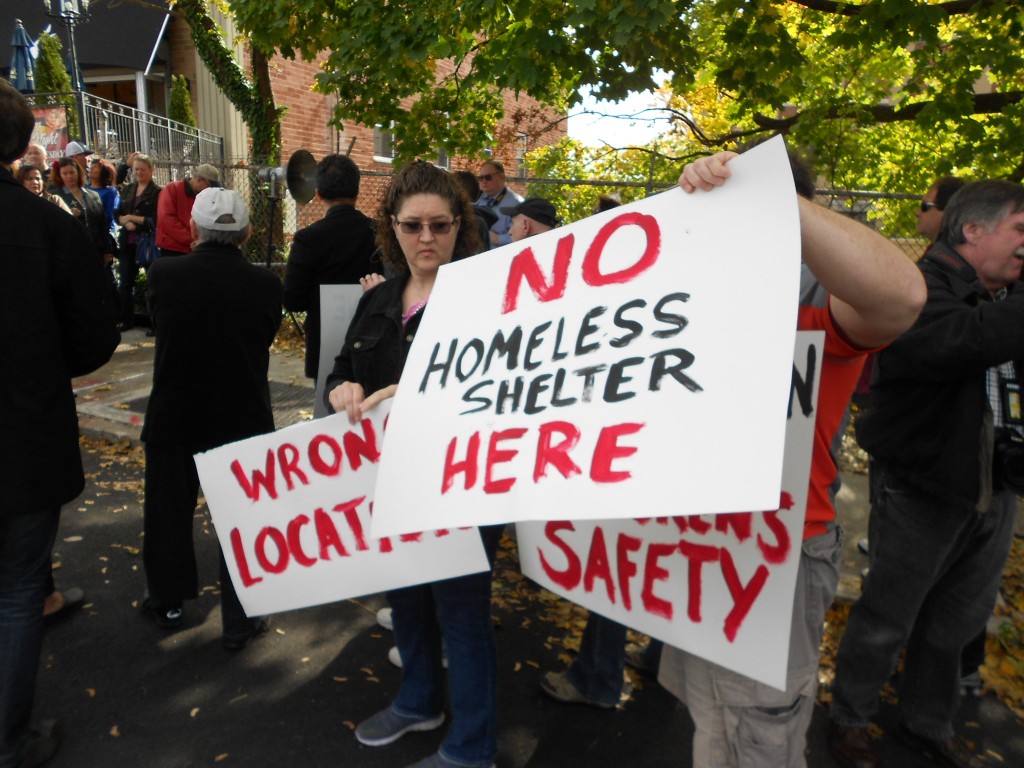 Protesters against bringing a 125-family homeless shelter gathered on Cooper Avenue on Saturday, in front of the proposed site on the Middle Village and Glendale border.

The proposed plan would turn a former airplane factory, located down the block from Atlas Park, into a homeless shelter that, according to speakers at Saturday’s event, could house individuals not from New York and even those with criminal backgrounds. The nonprofit Samaritan Village has submitted the proposal to the city Department of Homeless Services, which is reviewing it and ultimately has the final say as to whether the plan is approved or denied.

“I do not want sex offenders living here,” Assemblyman Mike Miller (D-Woodhaven) said at the rally. “I do not want people who do not fit into this community living here. I know this is not about us or our backyards, I understand that. But it doesn’t fit into what Glendale and Middle Village looks like and feels like. We have to make sure that doesn’t stop.”

The proposed location is in an area that would create a lot of pedestrian traffic, those attending the rally said. It is in the proximity of Atlas Mall and three schools, which protesters stressed are already overcrowded and could become even more so with the addition of children from the shelter.

Many of those who attended the rally said there were numerous issues with the site proposed for a 125-family homeless shelter, including saying it presents health concerns because of its use as a previous industrial site.

“This is our neighborhood and it is just not supportive of an institution like this,” said City Council District 30 candidate Craig Caruana. “I remember after [Hurricane] Sandy, we are a community that helps each other out and that’s what we are looking to do.  Unfortunately, this neighborhood cannot support the people that would be here.”

“We are 100 percent against a homeless shelter coming to this site,” she said to the protesters. “There are a number of reasons it doesn’t make any sense at all. The site is not safe, the city has an obligation to put families that are homeless in safe housing and this site is not safe for a number of reasons. It’s contaminated, it’s near rail sites and it has never been used as a residential space ever before, it is not meant for it, it is meant for industry.”

“We need to send a clear message to the owner of this building, Michael Wilmer, that we want responsible development and we want responsible development now,” Crowley continued. “We want a project that will benefit the community. We want jobs created at this site. It is meant for industry and there are businesses that are ready and willing to move in.”

Many of those in attendance said they want to help the homeless, but they do not believe this is the right location to do so. There were many signs held by protestors that read “Right Idea, Wrong Location.”

Assemblyman Andrew Hevesi (D-Forest Hills), who represents the Glendale and Middle Village neighborhoods, believes that this is not only a bad location for the community, but for those that would reside there.

“We want to help people that are in difficult circumstances, but we want to do it in the right way,” he said. “This facility is not suited for that purpose [providing transitional housing]. It is not going to work, it would cost too much money, and there is a chance that it is an environmentally contaminated site. There are a lot of problems with it.”

Heather Turberg organized the rally and said more people attended than she expected.

“I want as a community to make an impression, so whoever is involved in making the decision on the proposal knows we take this very serious and will find another site to put this,” she said.

There were talks at the protest, led by Glendale Civic Association President Kathy Masi, of continuing to fight against the proposed plan if it goes any further. One future plan is to protest in front of property owner, Michael Wilmer’s house.

Those in attendance believe that they will prevent the homeless shelter from opening in their community.