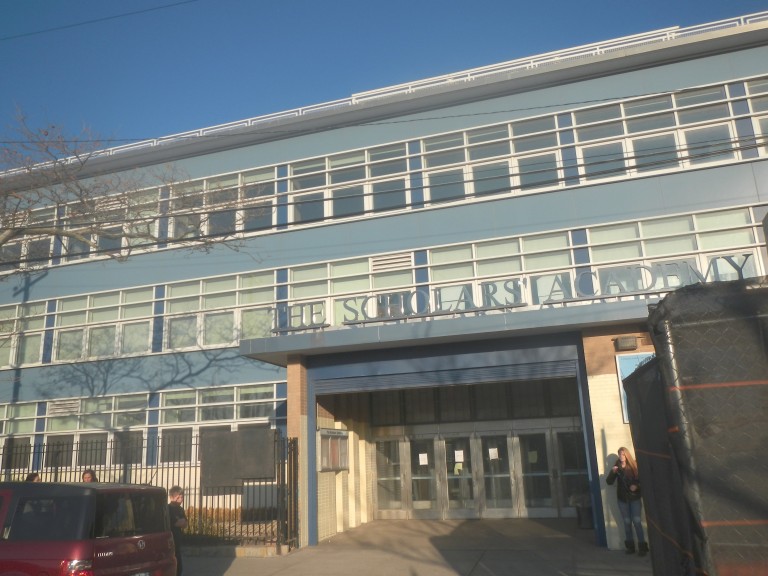 In stories released last week by CBS News and the The New York Post, a Howard Beach teen and her mother have introduced serious allegations that a bullying problem exists at Scholars Acade­my, in Rockaway, where Caitlin Rocco, 16, attends classes.

Although she has been in attendance at the school since the sixth grade, and is scheduled to graduate this year, she has just now stepped for­ward to paint an ugly portrait of her time at the school.

The attorney representing Scholars Academy student Caitlin Rocco and her mother, Marah , says he will file a law suit on their behalf in December, naming Scholars Principal Brian O’Connell, as well as other school administrators, students who allegedly were bullying Caitlin and their parents as defendants. Photo Courtesy Scholars Academy

The bout with what she and her mom allege has been torturous and tormenting bullying over the last 4-5 years, has now led to their hiring Man­hattan attorney, Tedd Kessler, to legally rectify the actions that the Rocco’s say drove Caitlin to con­sider suicide––not only once, but twice.

According to unconfirmed sources however, the teen never actually tried to take her own life––hospital reports show her as admitted on one oc­casion last year, for having suicidal thoughts.

Now Caitlin’s mother, has decided they will take action against those they hold responsible. They’re planning to sue the bullies and their par­ents.

“It’s about making a statement,” Marah Rocco told a 1010 WINS reporter, “It’s about letting peo­ple know that you have to hold parents responsible for what their children are doing.”

Attempts to get a statement from Scholars Academy were answered by Marge Feinberg, Department of Education (DOE) spokesperson, who spoke to The Forum through an e-mail that said “the school is aware of the student’s claims and taking the matter seriously. We cannot com­ment further because of pending litigation.”

According to the DOE statement, they “take bullying very seriously and work closely with schools to ensure that schools provide safe and respectful learning environments for all students. Under this administration, schools for the first time have regulations and procedures for report­ing and tracking bias-based incidents.”

Feinberg also explained that literature, specifi­cally a Respect For All brochure, and posters are distributed at the beginning of each school year to let students, parents and staff know where they can go if they witness or are victims of bullying.

When asked if the DOE had yet been served Feinberg said the Law Office “had not received the case yet.”

And Kessler confirmed that the DOE has not yet received a copy of the suit but provided details of the document as follows: “the allegations made in the suit are based on claims of a non-stop, in­cessant bullying campaign and the inability of the administration at the Scholars Academy to bring it under control.”

The suit, he confirmed, would name the De­partment of Education, Scholars Principal Brian O’Connell and assistant principals who were di­rectly involved, and in particular, any of the bullies who chastised his client; and any parents who had been made aware of their children’s bullying ac­tions and who had failed to address them.

“When this woman came to my office,” Kes­sler said of Marah Rocco, “it was because she had no where left to turn to. It was her last resort.”

Despite the fact that her daughter has chosen not to go to school in several weeks, the attorney says Caitlin Rocco “wants very much to go back”.

While stories continue to swirl around the school community about the expectations and the motivations behind the allegations, one thing remains very clear––neither the DOE, Scholars Academy, or any students implicated by bullying allegations were contacted or asked to speak on the issue by any of the reporting news outlets.

But alleged bullies and their parents were not the only ones implicated by accusations that little to nothing has been done to help Caitlin Rocco. In her opening statement during a radio interview, Marah Rocco made very clear her attempts to pursue numerous avenues to attack the problem at hand,

But the local officials to whom Rocco reached out, maintained that they did everything they could to help her remedy the situation.

Deputy Chief of Staff for Councilman Eric Ulrich (Rep. -Ozone Park), Sal Simonetti, said the office handled the situation exactly as man­dated by policy. A full report was made to the of­fice of the District Family Advocate and the Dis­trict Superintendant’s office. He communicated the action taken to Mrs. Rocco and after that, he said he never spoke to her again.

He also noted, that Mrs. Rocco had called to ask for the Councilman’s help not on direct con­nection to specific bullying actions, but to get the school to allow her daughter to take an AP class on line, because she claimed she was being bul­lied in the classroom. Inside sources at the school, who refused to be named, said that internal in­quiry of the allegations supported the schools handling of the situation and offered a number of alternative solutions.

“Allegations of bullying we take very, very se­riously,” said Councilman Ulrich, “and it is most unfortunate that unsubstantiated information may have cast a shadow of aspersion on such an educational gem in our community.”

Ulrich said that he himself has rigorously re­viewed the services provided by his staff to assist Mrs. Rocco and that he was satisfied with the ser­vice delivered. “At the end of the day,” Ulrich said, “this does not have a political solution.”

More of the same came from the office of As­semblyman Goldfeder who also confirmed that his staff reported the situation to the district of­fice and was assured that the situation would be passed through the proper channels and properly investigated.

Echoing his colleagues confidence in Schol­ars Academy, Goldfeder emphatically stated that in his associations with the school, nothing has compromised it’s pristine reputation.

Now, in the weeks ahead, it appears those named in the impending law suit will be notified and have to prepare to answer allegations against them.

Please see the related editorial.
Next week, we’ll take a closer look at bullying and how it affects our schools.

BULLYING BY THE NUMBERS