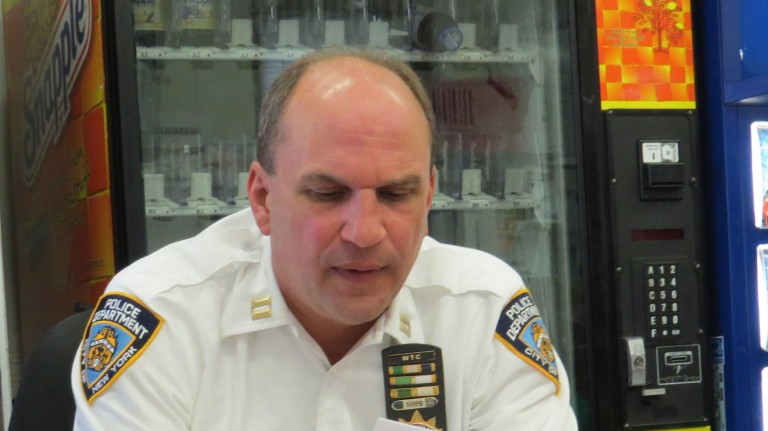 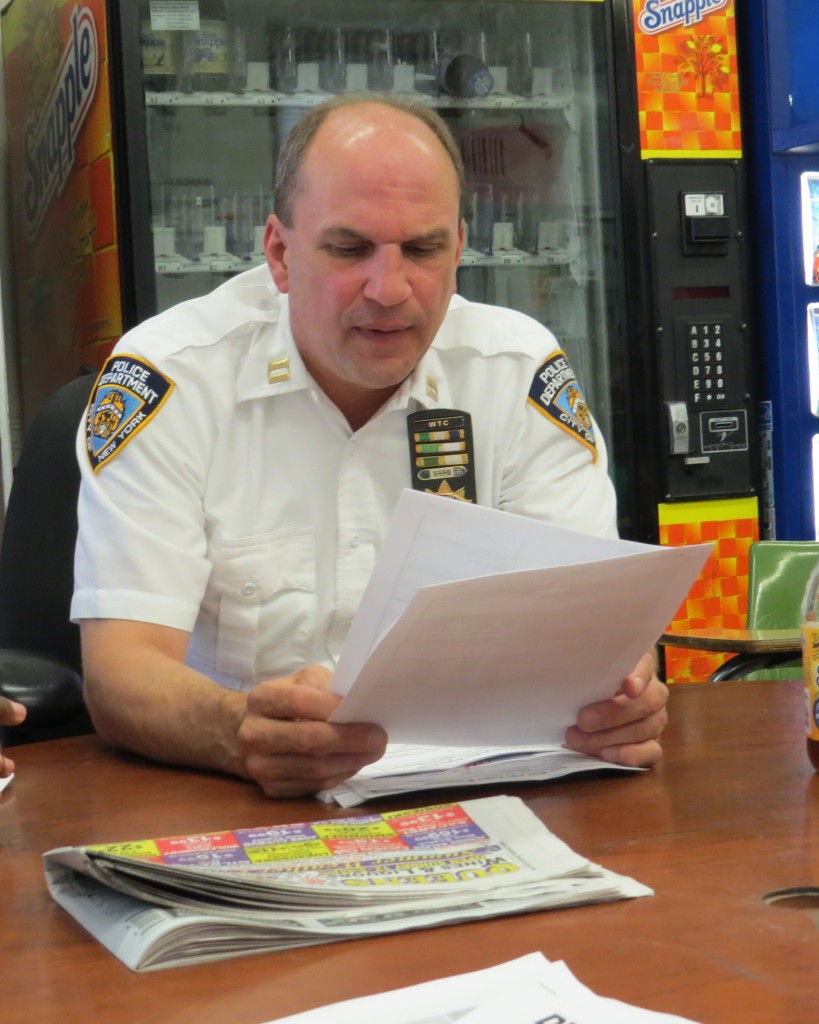 Capt. Christopher Manson, commanding officer of the 104th Precinct, said the precinct will be working hard to prevent the crime that tends to increase during the holiday season. Anna Gustafson/The Forum Newsgroup

Identity theft, phone snatches, deli robberies, and scams have recently plagued the 104th Precinct, and police are working diligently to address the crime throughout the area, Capt. Christopher Manson said in a sit-down interview last week.

A new – and disconcerting – trend, Manson said, is the robberies of delicatessens in the area. As of the meeting with the commanding officer last Friday, three delis had recently been robbed at gunpoint.

During the first such incident, which occurred Nov. 1 at 6:15 p.m. at a deli on Eliot Avenue, a man wearing a bandana and wielding a knife demanded cash – but fled with nothing, Manson said. On the evening of Nov. 5, another man attempted to rob  the 1 Neighborhood Deli on Onderdonk Avenue but he, too, ran off with nothing, according to the captain. Two men with masks and guns hit the Middle Village Deli on 67th Drive on Nov. 12 at about 8:50 p.m. This time, Manson said the perpetrators did manage to make off with some cash – about $1,500.

“These are troubling to us,” Manson said of the deli robberies. “We’re talking to every bodega about actions to take – get the best description they can and have surveillance inside and out of the location.”

Police are also searching for two perpetrators who committed two robberies in the 104th two Sundays ago – and likely robbed someone in the 112th precinct, Manson said.

The robberies in the 104th were committed by the same two people – one at 2:30 a.m. the Sunday before last and the other at 6:30 a.m. on the same day. The two individuals were driving a beige minivan and displayed firearms when they robbed the two individuals on the street.

Yet another series of robberies have been committed by three to six men, all around the age of 18, on bicycles, the captain noted.

“They’ll engage people – say, ‘Do you have a cigarette,’ or, ‘Do you have the time,’” Manson said. “Then they’ll usually demand their phone.”

These robberies began on Halloween night, and the last one was reported at about 12:30 a.m. on Nov. 10. The incidents have taken place on Onderdonk and Fresh Pond Road and Eliot Avenue.

“We have some robbery issues – we’re addressing them,” said Manson, who said he was especially pleased his officers arrested a man, Juan Pavor, 40, who robbed a woman of her cell phone by “putting his arms around her neck and choking her.”

The 104th captain stressed residents need to be especially vigilant about a rash of recent scams – including one of the most popular recent ones known as the “green dot scam.” As part of this scam, a perpetrator will tell a victim that they owe money – often to a government agency like the Internal Revenue Services – and that they will be arrested or deported if they do not pay. The victim will be told to pay something like $1,500 for a green dot card – which is essentially a debit card that can then be used when the perpetrator is told the card’s numbers.

“Don’t ever give anyone a dime,” Manson said.

The captain stressed that police are doing their best to address crime in the area – and he said the precinct was particularly thrilled that they were recently assigned nine new officers and a new sergeant – all of whom will be in a new unit working on robberies and violent crime.