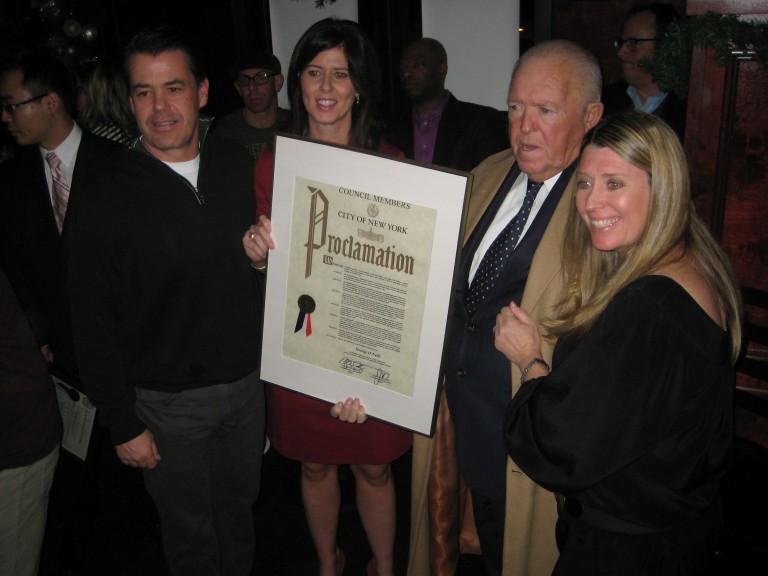 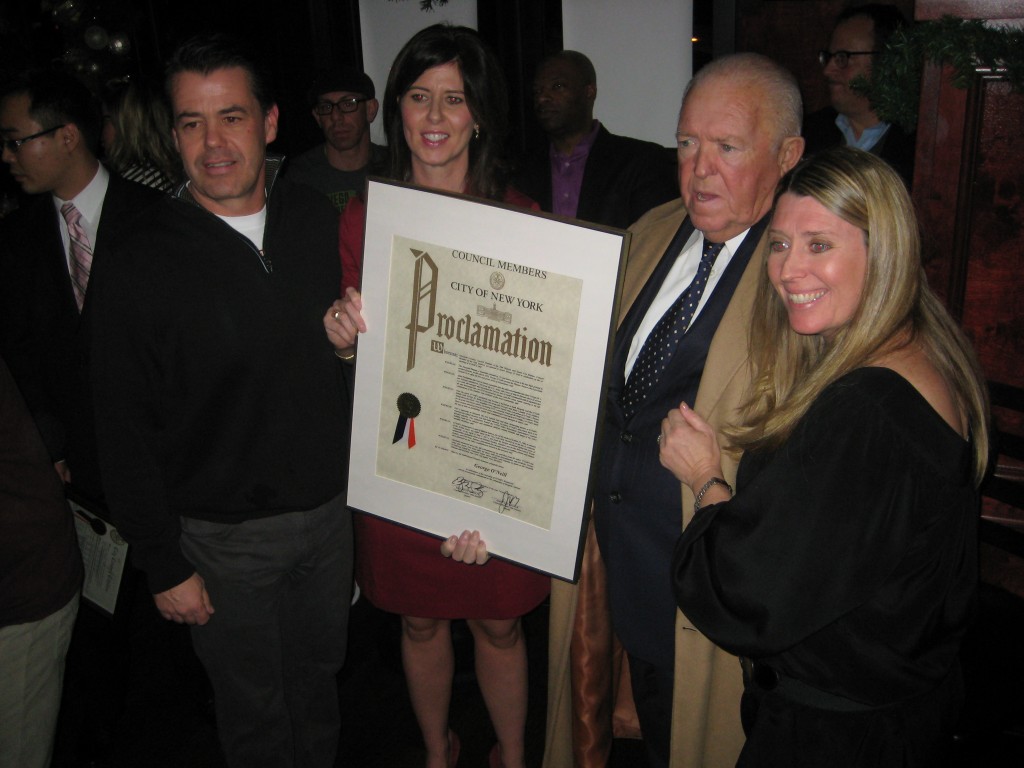 Maspeth’s famous O’Neill’s bar and restaurant turned back the clock eight decades this week with 10-cent drinks, free food and old tunes to mark the beloved eatery’s inception in the early 1930s.

The 53rd Drive pub was packed with patrons and politicians last Wednesday night – all of whom gave props to its proprietors for thriving since it opened the day Prohibition was repealed on Dec. 5, 1933. All the while, owner George O’Neill Jr. smiled from ear-to-ear as he and son-in-law Danny Pyle shared stories of the restaurant’s past, present and future. 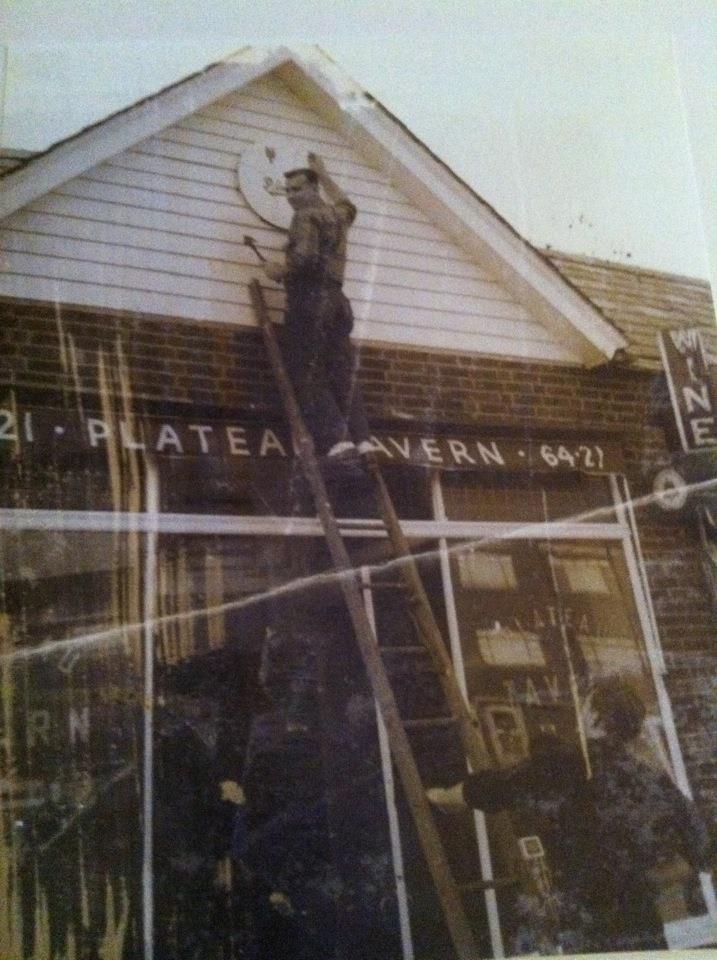 “We’re very excited to be back for the neighborhood to keep O’Neill’s going,” Pyle said, referring to a devastating five-alarm fire in May 2011 that brought the bar to its knees with over two years of repairs before its reopening.

“We’re looking forward to another 80 years here in Maspeth,” continued Pyle, who runs O’Neill’s along with his father-in-law.

The bar finally reopened and increased the size of its interior and dining menu in September to much praise from O’Neill’s fans across the borough.

Councilwoman Elizabeth Crowley (D-Middle Village) presented a ceremonial plaque and proclamation in honor of O’Neill’s as the pub took a break from its late 1920s and early ‘30s playlist.

Crowley read the Council proclamation word-for-word as George O’Neill Jr. looked on by her side.

“Everybody in Maspeth and the community surrounding loves O’Neill’s,” Crowley said. “Unfortunately, two and a half years ago, everybody knows there was a big fire, and it took down the walls. But it will never take down the memories and the real life and love that we have for O’Neill’s.”

O’Neill’s public relations and media manager Nick D’Arienzo did not seem to stop smiling for most of the night, continually showing guests the free steamship roast carving board station open throughout the night. He said the pub made sure to pay its respects to the Maspeth and greater Queens community through neighborhood-centric events and activism – both before and after the blaze.

“O’Neill’s is like a safe haven,” he said. “We’ve talked many times about the importance of community involvement.” 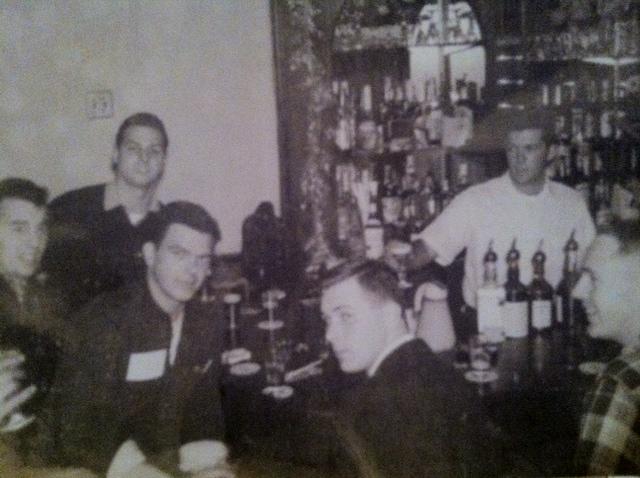 O’Neill’s current owner, George O’Neill Jr., seen here bartending in the 1950s, oversaw the expansion of the establishment from a bar to one of the borough’s most beloved gathering places.

D’Arienzo said the site’s current owner, George O’Neill Jr., had just returned from his 1956 tour of duty as a U.S. Army cook in Hawaii to join his father, George O’Neill Sr., behind the bar and expand the pub into a full-fledged restaurant. Generations later, O’Neill and his son-in-law Pyle, who married the owner’s daughter, Tara, still hold onto the historic watering hole.

Over the past eight decades, O’Neill’s, which was first named The Plateau Tavern, has been a community mainstay, becoming a gathering place for everyone from Mets Players to neighborhood regulars celebrating birthdays, weddings and christenings. It has also been a source of community strength, particularly following the Sept. 11, 2001 attacks, after which many residents turned to O’Neill’s to find support amongst their neighbors.

Last Wednesday’s celebration also marked the 80th anniversary of the end of Prohibition, which spurred its owners to reduce some of its beers back to early 1930s prices. The owners also invited some of its most beloved former bartenders back behind the bar, making the night’s celebration an alumni reunion of sorts as well.

Pyle and his father-in-law O’Neill shared stories of the historic landmark throughout the night, pointing to different sports artifacts and other trinkets framed along the walls.  Throughout its eight decades, Pyle said O’Neills became the go-to spot for several of the city’s most beloved sports teams and community organizations in Queens.

“We want to keep things going just the way they were,” Pyle said. “Everybody’s treated the same here.”