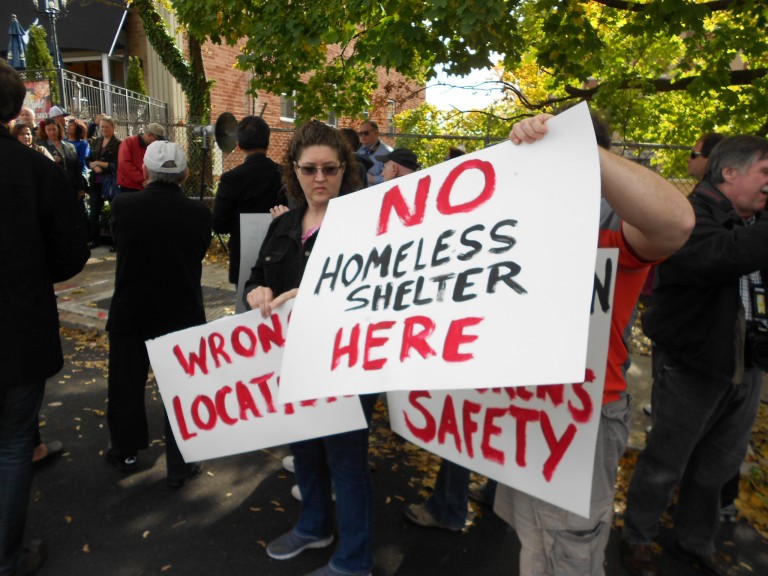 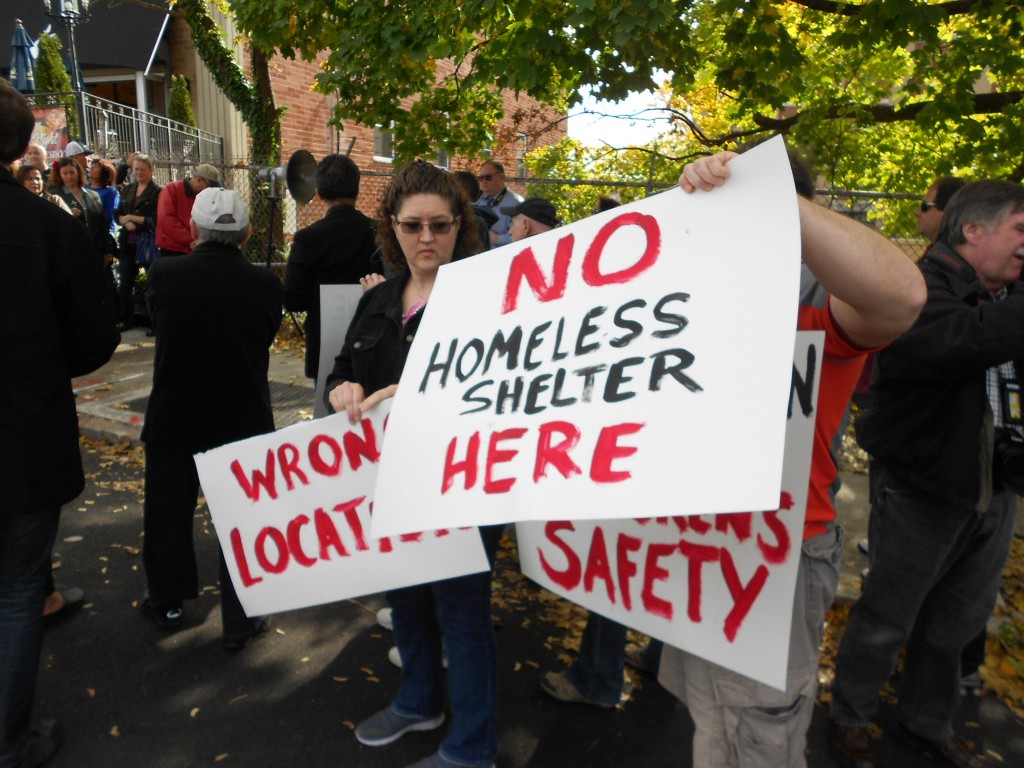 Residents have held numerous protests, including this one in November, against a proposal to operate a homeless shelter on the border of Glendale and Middle Village. File Photo

The city is moving ahead with plans to operate a 125-family homeless shelter on the border of Glendale and Middle Village, despite major opposition to the controversial facility from area legislators and civic leaders.

The city Department of Homeless Services sent a letter to Mayor Bloomberg’s office last Friday, stating the agency is proposing the city award a $27 million contract to the nonprofit Samaritan Village to operate a shelter at 78-16 Cooper Ave. A public hearing on the proposal was scheduled for 10 a.m. on Thursday, Dec. 12 at 22 Reade St. in Manhattan.

“There’s not enough police; there’s not enough fire protection for this,” Community Board 5 Chairmen Vincent Arcuri said of the shelter that civic leaders have vehemently protested. “There are issues of police, fire, sanitation… It’s a total disaster.”

After Samaritan Village notified CB 5 over the summer that it aimed to operate a shelter in the building that previously housed an airplane factory, outraged community members have held numerous protests against the plan and have argued that the facility would overwhelm the area’s already crowded schools and pose safety concerns for nearby homes and businesses because it could potentially house sex offenders.

The city DHS, however, has stressed that those who would live at the site would likely be single women who may be domestic violence victims with young children – individuals, the department has said, that need a lending hand to get back on their feet. In its letter to Bloomberg, DHS said Samaritan Village, which, if awarded the five-year contract, would aim to help the families in the shelter land more stable housing.

But legislators and community leaders said such housing to help homeless individuals could be provided in a way that would not stress the area’s resources as they said the proposed facility would. Arcuri, for example, said that a 125-family shelter could bring about 1,000 individuals to the site.

“You’re going to be moving those people in and out during the day – how many buses will that take?” the CB 5 chairman asked. “Or are they all going to walk to 80th street to get the bus?”

At a September protest against the shelter, Juniper Park Civic Association President Robert Holden also said the lack of transportation was a significant problem looming over such a shelter. The city DHS, in its Dec. 6 letter, said the facility would be “well-served by public transportation networks and most trips to and from the site that are not made entirely by foot would occur via bus or subway.”

The DHS goes on to say the shelter’s families would be able to use a number of bus lines and the M subway – which, at one mile from the facility, is a hike for the individuals, residents said.

Area politicians too panned the proposal, saying they will continue to fight the plan.

“While I firmly believe that we have a responsibility as citizens of New York state to provide shelter to vulnerable residents, I will continue to oppose this specific proposal,” Assemblyman Andrew Hevesi (D-Forest Hills) said. “At a potential contractual cost of nearly $30 million, this site remains insufficient in providing the necessary resources, specifically accessible transportation, to effectively help families transition out of the facility and into permanent housing.”

Councilwoman Elizabeth Crowley (D-Middle Village), who, along with Glendale Civic Association President Kathy Masi, collected thousands of signatures against the shelter, slammed the proposal, saying that “nothing in the Department of Homeless Services’ initial review has changed my mind.”

“It would be irresponsible for the city to spend more than $27 million to rehabilitate a site that was never meant for residential use,” Crowley said. “Instead of wasting time and money completely rebuilding this former manufacturing site, which may need serious environmental remediation, the money should be spent on locations that have housed residents before and can be easily converted to provide safe housing for families.”

And state Sen. Joe Addabbo Jr. (D-Howard Beach) said that while the stamp of approval from DHS and Thursday’s public hearing are indications the proposal is closer to becoming a reality, the “process and final determination is far from over.”

“I intend to listen to my constituents, work with my colleagues in government and related agencies and continue to advance my opinion that this site is not appropriate for a homeless shelter,” Addabbo said.

Crowley and Arcuri, among others, have said the site should house businesses – and they noted that owners have expressed interest in setting up shop at the site. However, the legislator and CB 5 leader said the owner, Michael Wilner, would not entertain their proposals. A number of residents have speculated that Wilner wants the site to be used for a shelter because the city would provide money to clean up the former industrial spot – an expensive endeavor.

“I don’t need people – I need jobs, jobs, jobs,” Arcuri said. “We’ve got all these well-trained, skilled people willing to work, but they need jobs. I had an Israeli knitwear guy look at the place, but the owner is being enticed by all this money from Samaritan Village.”

The city and Samaritan Village have argued that a homeless shelter is needed in the area, and DHS noted in its Dec. 6 letter that there are no homeless shelters in Community Board 5’s coverage area. Samaritan Village, in its letter to the community board over the summer, said that there is a growing population of homeless individuals in the borough and noted Queens’ high rental prices. The borough has about 25.6 percent of its rental units priced at less than $1,000 a month, whereas the citywide average is 37 percent. Additionally, home foreclosure starts increased by 24 percent in 2012 compared to 2011, and the poverty rate in Queens was 15.8 percent in 2011, compared to 12.2 percent in 2006, Samaritan Village documented.

According to the nonprofit’s plan, the organization would provide on-site security around the clock, every day of the week, and there would be access control, visitation and curfew policies.

The shelter proposal must receive the stamp of approval from Mayor Bloomberg before it would become a reality.