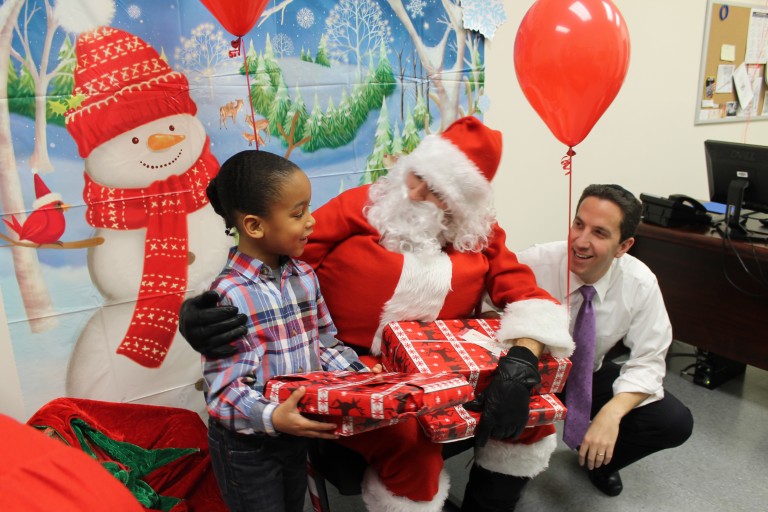 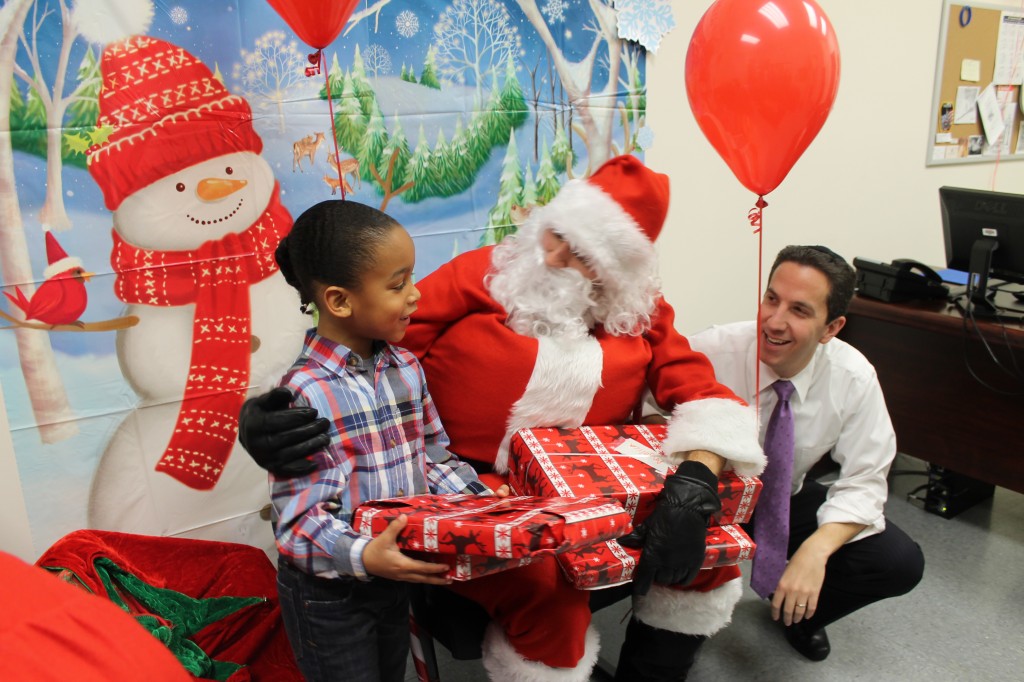 Assemblyman Phil Goldfeder, right, worked with the Secret Sandy Claus Project to turn his office into the North Pole to bring holiday cheer to children whose lives were turned upside down by Hurricane Sandy last year. Photo Courtesy NYS Assembly

Last Thursday, Assemblyman Phil Goldfeder (D-Howard Beach) converted his community office in Rockaway Beach into the North Pole as he teamed up with the Secret Sandy Claus Project to bring the holidays to children whose families were affected by last October’s Superstorm Sandy.

The Secret Sandy Claus Project, founded by Michael Sciaraffo in the wake of Sandy, is a collective city-wide effort to distribute toys to more than 15,000 children across the affected Sandy-damaged areas in New York and parts of New Jersey.

The original goal of the project was to match up each child with a toy they had lost or asked Santa for Christmas.

“I partnered with the Secret Sandy Claus Project and Rockaway Free Flea Market to transform my office into a winter wonderland. Our goal was to make sure no child goes without a present this year. It was great to see faces light up as children received toys from Santa and Mrs. Claus.”

Goldfeder added that the event demonstrated that all the Sandy-affected communities will remain united until all families are recovered.

Belle Harbor resident Irene Dougherty had signed up for the Secret Sandy Claus Project and brought her three kids, Ryan, 14; Brendan, 11 and Kevin, 9 to the Assemblyman’s office on Beach 96th Street where each child received two toys.

Dougherty, who is also a member of the PTA at PS 114, had high praise for the work of Goldfeder and the Sandy Claus Project.

“Phil is great.  He was absolutely marvelous,” she said. “It was very nice to be included in Secret Sandy Claus. It is so nice that people are looking out for our kids as we try to get back on our feet.”

Explaining that the effects of Sandy have still to be put behind them, Dougherty, who was forced to live in Brooklyn for two months following the storm, said that the family’s basement, which took on nearly seven feet of water, is still unusable.

“We’re still waiting to rebuild. I just want my kids to be able to go down in the basement and play.”

She said the family is still awaiting word from the city’s Build it Back program on when funding will be available to reconstruct the basement and also repair her home’s badly damaged porch.

She said that Goldfeder has gone “above and beyond” in helping the family.

Dougherty also had praise for the project’s founder, Michael Sciaraffo.

“It was really amazing how Michael came into the neighborhood, having no ties, and has helped so many people.”

Rockaway resident Marisa Bernowitz is a “head elf” for the project and operates many routes across Sandy-impacted areas in Queens. She also helped staff and coordinate the event at Goldfeder’s office.

“The Secret Sandy Claus Project is an all-volunteer effort of people trying to give kids in the Sandy-affected areas some gifts for Christmas,” said Bernowitz, who nows all too well the losses from Sandy.

Bernowitz lost her home during Sandy and also hasn’t had a job since the storm hit last October.

“I don’t know where I find the energy or the drive to do what I do but I will keep doing it,” she said.

“It was a very nice event,” said Woods, who also had a rough time during Sandy, recalling how she didn’t have electric for nearly a month and was unable to get her wheelchair-bound daughter out of the house for a doctor’s appointment.

“The storm was very rough and it affected lots of people in very bad ways. I saw the boardwalk coming down the block,” she said.

She noted that many people, especially in Belle Harbor, are still not back in their homes for Christmas.

But, Woods said she was thankful for Goldfeder’s help.

“I see the Assemblyman trying to do the right thing for people. His staff really tries to help you out whenever you come into his office,” she said.

“He seems very genuine to me.”