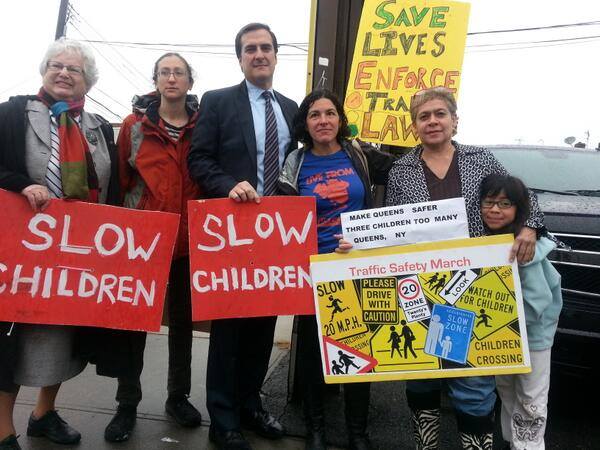 The recent death of 8-year-old Noshat Nahian, who was struck and killed on his way to school in Woodside by a tractor-trailer making an allegedly illegal left turn on Northern Boulevard has residents, politicians, safety activists and even emergency room doctors looking for real changes to help make the borough’s streets safe for pedestrians.

Sadly, Nahian’s death on Dec. 20 was not an isolated incident but rather part of what many area leaders and residents are calling a disturbing trend of rising pedestrian injuries and fatalities in the borough.

A recent pedestrian injury summit, held at Elmhurst Hospital Center, confirmed that such injuries have been rising for about a decade and peaked last year with nearly 300 injuries, second only to falls as the major cause of injuries treated at the hospital.

He also noted that while Queens Boulevard used to be one of the most dangerous thoroughfares for pedestrians, in the past few years both Northern Blvd and Roosevelt Avenue have become increasingly dangerous spots for walkers and bicyclists alike.

Legislators and residents gather at a vigil for Noshat Nahian, an 8-year-old boy who was killed after being struck by a tractor-trailer while walking to school. Photo courtesy Make Queens Safer

Drawing on some of the data brought out at Elmhurst’s recent summit, Agriantonis said that overall prevention of pedestrian accidents is something that is both within reach and of the utmost urgency.

“What can be done is a combination of education, redesign of roadways and traffic devices and taking a look at streets and finding ways to make them more pedestrian friendly,” he said.

He added that some intersections can be made safer and that law enforcement can examine how pedestrians cross major roadways and also better monitor drivers and how they obey traffic signs and signals and whether or not they yield to pedestrians.

Moreover, Agriantonis said that the hospital is currently in the middle of a separate study, examining the circumstances of each and every pedestrian injury to try and see what each person was doing and what was going-on at the time of the accident.

He said he is hopeful that the study will show some other trends as well, such as whether or not distractions such as cell phones, texting or earphones played any part.

“Right now, all we can do is speculate,” Agriantonis said.

Cristina Furlong, a Jackson Heights resident and spokesperson for MakeQueensSafer, a group formed to bring awareness to issues such as reckless driving, unsafe street design, and lack of enforcement of traffic laws, said that more focus is needed on pedestrian safety in the borough.

“It is so important, especially in Queens, to get people to stand up and demand change when tragedies, such as the death of an 8-year-old school boy occur,” said Furlong.

Furlong, who both attended and helped organize a recent vigil for Nahian, called Northern Boulevard a “major danger,” especially because there are three schools along the route that make crossing the boulevard a necessity for scores of school children.

Among the changes MakeQueensSafer is hoping to see include development of a strong community-based movement that sees pedestrian and cyclist fatalities as intolerable and 100 percent preventable; safer street designs; stronger enforcement of traffic laws; driver accountability and helping to provide resources and education materials on driver, pedestrian, and cyclist safety on Queens’ overcrowded streets.

But, long term, she said the community needs to reach out to elected officials in Albany and ask them for changes to laws regarding reckless driving as well as highway redesign.

“There’s an epidemic of drivers who walk away from fatal collisions with little more than a few tickets,” she said, adding that stiffer penalties for reckless driving are needed.

State Sen. Michael Gianaris (D-Astoria) has introduced legislation that would crack down on reckless drivers after a crash by empowering police to remove the involved vehicle’s plates and impound the vehicle pending an accident investigation.

Furlong made the comparison to how police can seize and impound vehicles involved in felony drug offenses.

“Reckless driving is a crime,” she said. “We need to start treating it like one.”