A Queens City Councilman’s change of heart helped spur Councilwoman Melissa Mark-Viverito’s (D-Manhattan) camp to declare an early victory in the race for the body’s next speaker.

Mark-Viverito boasted support from 30 Council members, including one of three Republicans casting votes in the race – but not without a bit of drama first.

City Councilman Eric Ulrich (R-Ozone Park) gave his vote of confidence to the Manhattan-based Democratic Councilwoman nearly two months after saying the complete opposite because of reports that she was reluctant to stand and recite the Pledge of Allegiance. Ulrich said he had since met with Mark-Viverito and changed his tune after she assured him she would stand for pledge and recite it in the future.

“I was going up until that point based upon what I had read and what I had been told by others,” Ulrich told reporters. “I don’t judge her patriotism.  The issue was resolved behind closed doors.” 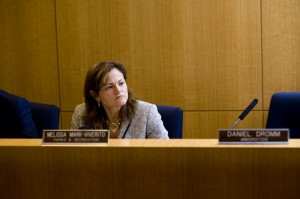 Councilwoman Melissa Mark-Viverito (D-Manhattan) said she has enough votes to become the next City Council speaker, though another legislator, Councilman Dan Garodnick (D-Manhattan) said the spot is still up for grabs. Photo courtesy William Alatriste/NYC Council

But nevertheless, the Queens Republican, who could not be reached for comment, said his decision to support Mark-Viverito was independent of any outside influence or motivation of seeking a leg-up on any top committee assignments under Mayor de Blasio’s new administration – of which he has been accused.

“I want to congratulate my colleague Melissa Mark-Viverito on winning a hard-fought race for speaker of the City Council,” Ulrich said in a statement. “I am happy to be part of a diverse coalition of councilmembers and look forward to working with them in a bipartisan fashion on behalf of the working and middle class families in my district and throughout the five boroughs.”

Mark-Viverito’s campaign released a statement detailing 30 letters of support, which would be enough to secure her spot as the Council’s first Latina and second female speaker, provided she lands all those votes in early January, succeeding outgoing Speaker Christine Quinn.

“I am humbled to have the support and confidence that my colleagues have placed in me,” she said in a statement. “Today is the culmination of over two decades of my work at the grassroots, in non-profit organizations, in labor and as a public servant. I know that my fellow members will work with me in the City Council to create more inclusive legislative body where every member’s voice is heard and validated.”

Her claims of victory came despite rival City Councilman Dan Garodnick (D-Manhattan) saying the speaker spot has yet to be decided after receiving endorsements from former speaker candidate Mark Weprin (D-Oakland Gardens), Councilwoman Karen Koslowitz (D-Forest Hills), among others.

“It is premature to declare victory,” Garodnick said in a statement. “We are going to elect a speaker on Jan. 8, and I hope to earn the votes of my colleagues then.”

The final vote will be held when the Council reconvenes for legislative session in January, when 51 members will decide the next speaker. It takes 26 votes to win the spot.