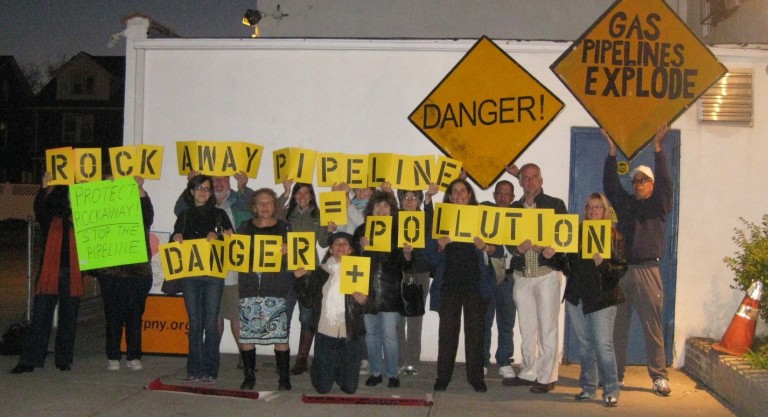 With the public comment period over for a plan to install a natural gas pipeline underneath parts of Queens, including the Rockaways, opponents still have not abandoned their efforts to stop the controversial project.

Residents were given about two months, until early December, to sound off over the Rockaway Delivery Lateral Project and must now wait for the Federal Energy Regulatory Commission’s final assessment of the project, followed by a vote by Congress. The $265 million project would, if approved by federal legislators, build a gas pipeline that runs through Gateway National Recreation Area, including Jacob Riis Park and Jamaica Bay, as well as install a gas metering and regulating station in two hangars at Floyd Bennett Field.

Defended by the two companies that want to bring the project to fruition – National Grid and Williams Transco – as necessary to address growing energy needs in New York City, opponents have said the project would disrupt the area waterways’ ecosystems and set a precedent allowing private, for-profit companies to lease public park land, among other concerns.

J.K. Canepa of the Coalition Against the Rockaway Pipeline said her group traveled to Albany Wednesday for Gov. Andrew Cuomo’s State of the State address to ensure their message of opposition stays relevant.

“We are concerned about natural gas as a contributor to climate change,” Canepa said. “Yes, it does burn relatively cleanly and puts out a small amount of carbon dioxide when compared to gas, oil or coal. But what it also puts out is methane.” 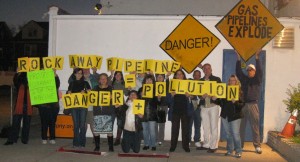 Members of the Coalition Against the Rockaway Proposal protest a plan to build a natural gas pipeline in the Gateway National Recreation Area, including Jacob Riis Park and Jamaica Bay. Photo courtesy CARP

Williams and National Grid released an Environmental Impact Statement in October assessing how the 3.2-mile, 26-inch pipeline would impact parts of Queens and Brooklyn, which was subject to a public comment period through Dec. 9. Both companies have argued the proposal would make it easier to get natural gas to parts of the city in a safe way.

“We are investing heavily in our gas infrastructure to ensure reliability, safety, and to connect our customers to the energy they need to heat their homes and run their businesses in the most economic manner,” said Ken Daly, president, National Grid New York in a statement. “This project is critical to provide the additional clean economical natural gas supplies that our customers need; it supports the regional environmental goals, and it will help the local community in its ongoing rebuilding efforts.”

In response, Assemblyman Phil Goldfeder (D-Rockaway) fired off a letter to Williams and National Grid pressuring them to preserve the environment of parts of Queens, including Jamaica Bay. Though he has not publicly supported or opposed the plan just yet, Goldfeder’s biggest argument revolved solely around sustainability.

“It’s not about being greedy. It’s about doing the best we can for Jamaica Bay,” he said. “The bay is an economic attraction for the community and we need to ensure we’re not hurting it, but making it better instead.”

holding meetings to calculate the next plan of attack.

One of the coalition’s talking points has revolved around the readiness of New York to rely more heavily on renewable energy. A report published by Stanford University engineering professor Mark Z. Jacobson and his colleagues argued the same point, arguing against natural gas and explaining how New York could become completely renewable by 2030 relying only on wind, water and sun without losing money.

“Natural gas is excluded for several reasons,” the report said. “The mining, transport, and use of conventional natural gas for electric power results in at least 60 to 80 times more carbon-equivalent emissions and air pollution mortality per unit electric power generated than does wind energy over a 100-year time frame. “

In his report, Jacobson argued the conversion would create more jobs than lost, since most energy would be from within the state. It would also create long-term energy price stability, since fuel costs would be reduced to zero, Jacobson said.