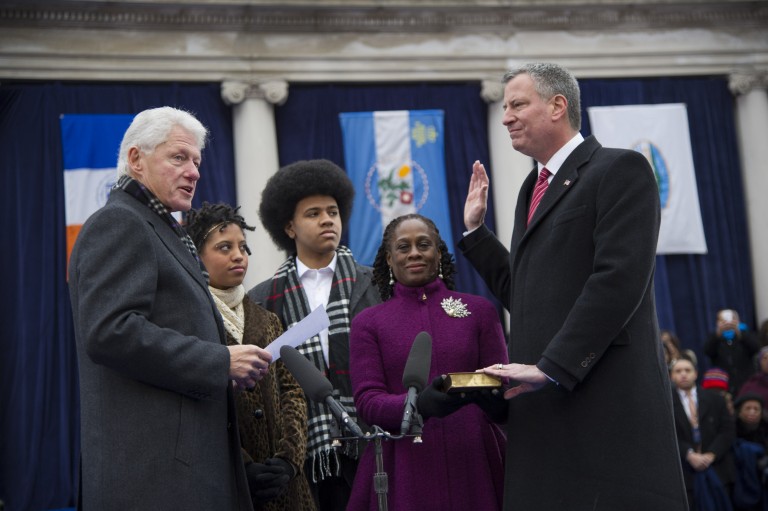 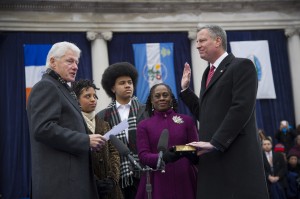 Bill de Blasio was sworn in Jan. 1 as New York’s 109th mayor in a ceremony that drew more than 5,000 people to City Hall and during which the city’s new leader vowed to make the five boroughs “a fairer, more just” place.

Sworn in by former President Bill Clinton, de Blasio stood before a massive crowd on a frigid New Year’s Day and told New Yorkers that his administration would immediately begin working on expanding the Paid Sick Leave law to include an additional 300,000 city residents, as well as requiring “big developers to build more affordable housing.”

The new mayor also spoke of his plan to offer universal pre-kindergarten and after-school programs for all middle school students – which would be funded by an increase in taxes. The plan has landed de Blasio criticism from other area leaders, including Gov. Andrew Cuomo.

“Those earning between $500,000 and one million a year, for instance, would see their taxes increase by an average of $973 a year,” de Blasio said, referring to the increase that would help to pay for the universal pre-kindergarten program. “That’s less than three bucks a day – about the cost of a small soy latte at your local Starbucks.” 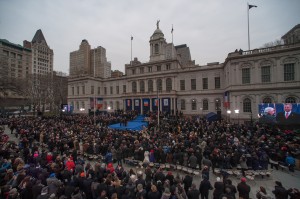 The first Democrat to serve as mayor in two decades – following former Mayor Michael Bloomberg, who was both a Republican and Independent, and former Republican Mayor Rudy Giuliani – de Blasio praised his predecessors.
“Thank you, Mayor Bloomberg,” de Blasio said to the former mayor who was sitting feet from him at the inauguration. “To say the least, you led our city through some extremely difficult times. And for, that we are all grateful. Your passion on issues such as environmental protection and public health has built a noble legacy. We pledge today to continue that great progress you made in these critically important areas.”
By Anna Gustafson