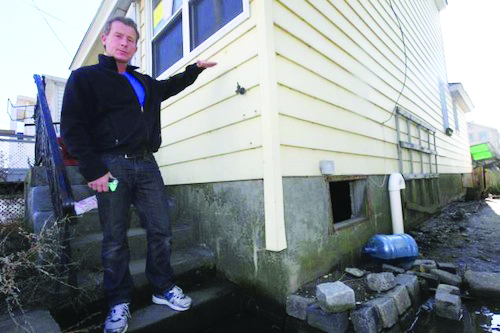 The fact that many homeowners in Queens are still rebuilding and recovering from Sandy, more than a year later, is little surprise given the storm’s historic levels of destruction.

But, what may be surprising is some homeowners’ conclusion that they may have fared better in the end without any flood insurance whatsoever.

Such is the case for Belle Harbor resident Irene Dougherty, who moved to the Rockaways with her husband in 2000.

Dougherty, who is still in the process of rebuilding certain parts of her home, estimated her total damages from the storm in the $50,000 to $60,000 range. 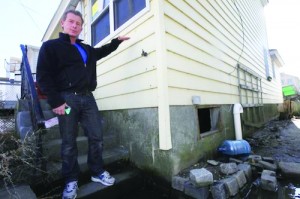 Dan Mundy Jr., president of the Broad Channel Civic Association, stands outside a home typical of those that could be impacted by a potential wave of highly escalated flood insurance rates. Many residents who had insurance during Hurricane Sandy have, Mundy said, felt as though they are being punished for doing the right thing because they have received less money for rebuilding than those who did not have insurance. File photo

She said she received around $26,000 from her flood insurance – but the majority of that money was used to replace her three sons’ sports equipment and her husband’s tools, which had all been stored in basement. The Federal Emergency Management Agency did not cover any of the basement’s contents or other damages to the room.

Dougherty said that she and most homeowners who carried flood insurance received only about $3,500 from FEMA, mainly as temporary relocation expenses.

Overall, Dougherty said that they didn’t fare as well as other homeowners in the area who had no flood insurance. Many of those people, she said, were entitled to maximum amounts of aid, close to $35,000.

And, once people received the maximum from FEMA, that often helped paved the way for other programs from the state, which could add thousands more.

“For some people in the area Sandy was the best thing that ever happened to them,” Dougherty said, referring to the fact that they had no insurance and were given maximum amounts from FEMA and thus able to rebuild their homes even better than they were before the storm.

“In hindsight, I would have been much better off had I not had flood insurance,” Dougherty said.

“We thought we were doing the responsible thing and now I feel like we were penalized for it.”

Through a spokesperson, FEMA officials said that the agency, which administers the National Flood Insurance Program, strives to aid those in need as quickly as possible.

The officials pointed out that to date, more than $7.9 billion has been paid out to NFIP policyholders impacted by Hurricane Sandy, and the average payment is more than $51,000.

FEMA said that in New York City, more than 66,000 people have also received individual assistance through FEMA’s Individuals and Households Program (IHP), which is intended to provide emergency assistance following a disaster, primarily in the form of rental assistance and minor home repairs.

FEMA officials emphasized that they “will not be satisfied until flood insurance policyholders have received payments for all covered losses.”

Howard Beach homeowner Susan Shearin also had problems with how Sandy victims were treated in addition to questions about FEMA’s flood insurance program. Last October, she wrote a letter in response to an editorial in the Daily News about the city’s Build it Back program.

Shearin wrote in the Daily News: “…After spending hours collecting paperwork, then hours filing applications, not one person that I know has received any help. Oh, sorry, I forgot: We do get emails reiterating the fact that if any of us did have flood insurance, we would certainly be at the bottom of the list and probably not receive anything. Why should anyone be penalized for having insurance that did not pay nearly enough to cover expenses?”

She continued, “I, for one, am still working on my home and have been spending my own money to do so. Build It Back is just another scam connected to this storm, as is the Robin Hood Foundation, which collected millions and never gave us a penny.”

Dan Mundy Jr., president of the Broad Channel Civic Association, said that much of FEMA’s reimbursements seemed to be done in a “haphazard” fashion where people on the same block got vastly different amounts of assistance.

Mundy Jr. confirmed that many people who “did the right thing” by having insurance, were found to be ineligible for the city’s Build it Back program whereas many who had no insurance were covered.

“I can empathize with people,” Mundy Jr. said. “They felt like they did the right thing and now they feel as if they’re being punished for it.”

In addition, he said that while new flood insurance maps are out; the newest maps are still flawed.

“There are many homes in Belle Harbor, which were destroyed during Sandy, which under the newest maps may not be required to carry flood insurance.  As a result, those homeowners, even if they decide to get insurance, will pay substantially lower rates because the new maps have determined they don’t need it.”

Mundy Jr. said that a vastly unequal scenario could emerge where there might be “some millionaires paying like next to nothing or $300 a year for insurance while others in the Rockaways, likely making average incomes, paying through the nose or close to $36,000 per year.”

He added that both the flood insurance maps as well as the rates need to be changed.

To that end, Mundy Jr. said that an upcoming vote in the Senate this week on flood insurance rates may help to push the issue forward.

Dougherty said that her future is uncertain regarding rebuilding her home from Sandy.

“Our insurance premiums will now be going up and we still don’t know if we have to elevate our home,” said Dougherty, who related a surprising story when she met with a FEMA official regarding house elevation.

“A representative from FEMA was telling me I may have to elevate my home from 10 to 15 feet off the ground and he asked me why I looked upset,” she recalled.  “He told me, ‘think of the view you’ll have.’”

FEMA officials advise policyholders with concerns about their insurance companies to reach out directly to FEMA by calling 1-800-427-4661.