After serving his community for decades, Robert Ruffin, Sr.’s mark on Queens will be felt for years to come.

The community leader’s life was remembered by family members, friends and other civic leaders at a funeral service held Tuesday at the Westminster Presbyterian Church in Jamaica. Ruffin, who served in the U.S. Army during World War II from 1941 to 1945, was buried at Calverton National Cemetery on Long Island.

Born March 3, 1919 in Fort Worth, Texas to the late Claude and Claudia Ruffin, he was the second son of seven siblings – including four brothers and two sisters.

A graduate of the LM Terrell High School in Fort Worth, he went on to serve his country from 1941 to 1945. After he was honorably discharged from the Army, he moved to San Francisco and attended Golden Gate College for two years.

Ruffin moved to New York City in 1953 and attended Monroe Business College in the Bronx, where he received a certificate in bookkeeping, accounting and tax preparation. He went on to work for the U.S. Post Office for 31 years, and at the time of his retirement he was the Superintendent of Building Services. 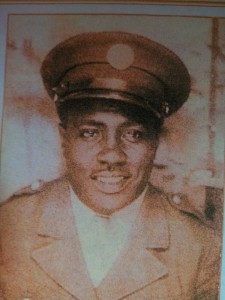 Ruffin went back to school and graduated from York College in Jamaica in 1989, receiving a Bachelor’s degree in Political Science. He was a proud member of the York College Alumni group.

As his family wrote in his obituary printed for the funeral, “Robert loved reading, travelling dancing, and the ladies; his trademark line to women he met was, ‘Give me a hug and a kiss.’”

“We all loved him, but God loved him best,” his family wrote.