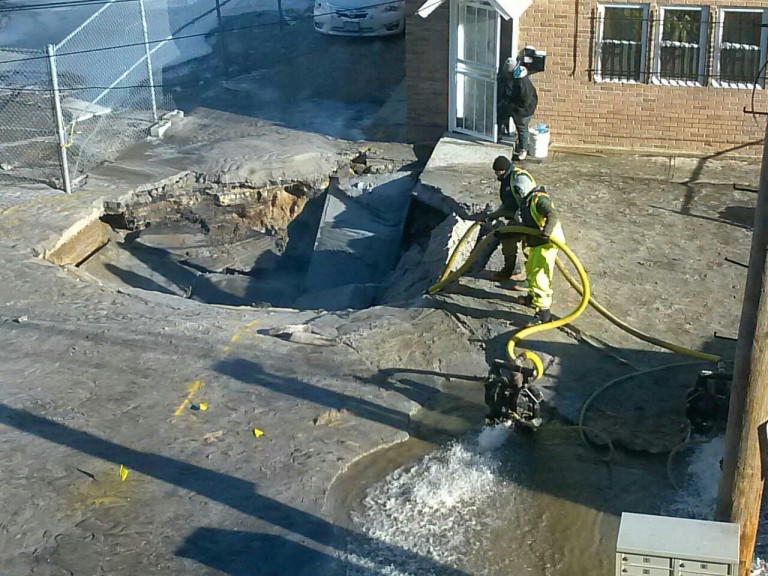 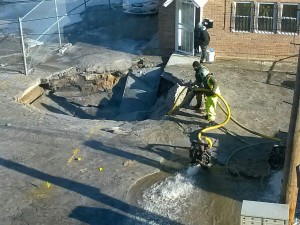 Beach 84th Street has been plagued by sinkholes, as have other areas impacted by Hurricane Sandy, such as this one that occurred during last week’s snowstorm. The sinkhole has since been filled. Photo courtesy Brett Scudder

The re-emergence of a sinkhole and a water main break on Beach 84th Street near Beach Channel Drive in Rockaway Park – which rendered residents unable to use their tap water at the end of last week – has once again highlighted the need for the city to launch a comprehensive study of sewer infrastructure, and other flood mitigation issues, throughout South Queens and the peninsula, area leaders and residents said.

The water main break occurred during last week’s snowstorm late Thursday or early Friday, causing water to rush down a street that residents say is plagued by flooding issues and prompting the formation of a sinkhole in a driveway that was about three to four feet in circumference and about a foot and a half deep. The flooding impacted about 41 residences on a street where area residents stressed numerous children and families live.

Because of concerns over water quality, the city Department of Environmental Protection shut off the block’s water service while they tested it. Residents were permitted to once again use their water on Sunday.

“There are so many problems on that block – there are problems with heat; there are problems with sinkholes and flooding,” said Marissa Berkowitz, founder of the Rockaway’s Sandy Relief Free Flea Market, a group which she formed following last year’s hurricane to help residents with a wide variety of needs, including coordinating donations efforts to benefit storm victims. “People shouldn’t have to live like that.”

Assemblyman Phil Goldfeder and Brett Scudder, a community activist whose family lives on Beach 84th Street, have praised the city DEP for responding to the problem immediately. Scudder also lauded Goldfeder, Councilman Donovan Richards (D-Laurelton), and state Sen. Joe Addabbo Jr. (D-Howard Beach) for their help with coordinating efforts to address the flooding and sinkhole – which has been filled.

Still, while the problem was immediately addressed – and, Goldfeder stressed, during inclement winter weather, residents said flooding problems have long persisted throughout the Rockaways and South Queens – and have grown increasingly worse following Hurricane Sandy.

“I’m very concerned about the people living on that block,” Scudder said. “When it floods, you see garbage floating there; you see sewage. These are very serious health risk. If that sinkhold had opened any wider, there could’ve been a gas rupture.”

Goldfeder stressed that since Sandy, there have been a myriad sewer infrastructure issues throughout southern Queens – particularly Howard Beach, Hamilton Beach and Broad Channel – and Rockaway. 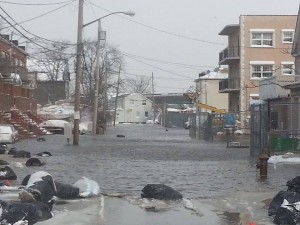 Area leaders are calling on the city to conduct a study on flooding throughout South Queens and Rockaway, including on the pictured Beach 84th Street. Photo courtesy Brett Scudder

“As the weather changes, we see that  putting extra pressure on the infrastructure,” Goldfeder said. “We see sinkholes, potholes and other deterioration.

“Unfortunately, it took a natural disaster for the world to see what residents have been talking about for years,” he continued. “Our infrastructure is aged, and we need to make significant investments to protect our families for the long-term. If we don’t invest now, it’ll cost much more in the future.”

Goldfeder said he is calling on the DEP to do a “thorough examination” of infrastructure, including catch basins, throughout Sandy-affected neighborhoods.

“I want the DEP to make a determination if there are large capital infrastructure projects that need to be done,” he said.

As for the families on Beach 84th Street, Bernowitz said many hope to move from the block because of the flooding issues but are prevented from doing so for financial reasons. She and others are continuing to collect food goods and clothing items for the families that frequently struggle with a lack of heat and flooding problems.

To speak with Bernowitz, or someone from her group, about donating, call (347) 913-5664 or visit www.facebook.com/WeeklyFreeFleaMarket.