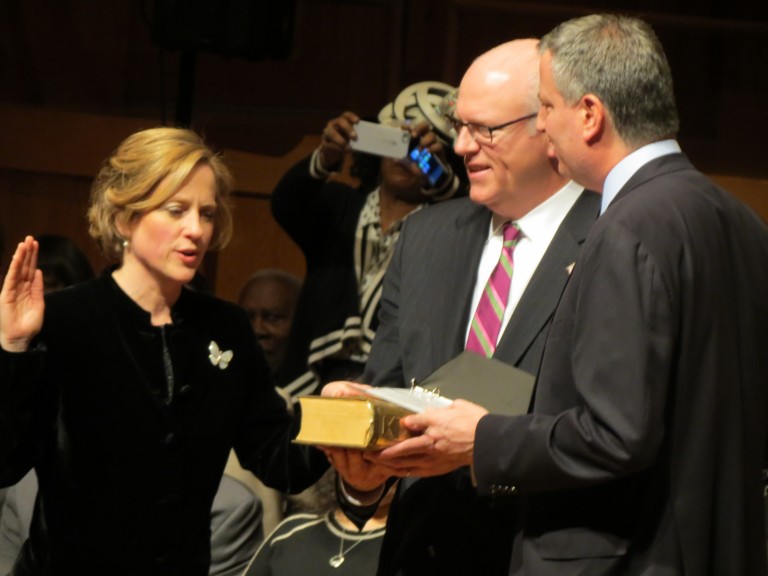 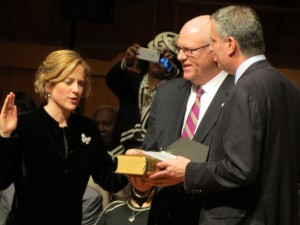 Mayor de Blasio, right, administers the oath of office to Melinda Katz during Katz’s inauguration as Queens’ 19th borough president. Holding the Old Testament used for the swearing-in was U.S. Rep. Joseph Crowley, chairman of the Queens County Democratic Organization. The copy of the Old Testament they used had been given to Katz’s late father, David Katz, founder of the Queens Symphony Orchestra, by former Queens County District Attorney Frank O’Connor. Photos by Anna Gustafson

While Borough President Melinda Katz’s inauguration ceremony included the expected parade of high-profile politicians, including U.S. Rep. Joe Crowley (D-Queens, Bronx), Mayor de Blasio, and U.S. Sen. Chuck Schumer (D-NY), there were moments when the festivities gave way to something less flashy and more policy-driven: An agenda that, according to Queens’ new leader, will emphasize help for Sandy victims, a focus on education, and improving health care.

At the inauguration ceremony held last Thursday at Queens College, Katz, a Forest Hills native who replaces former Borough President Helen Marshall, announced that her administration will form a Storm Relief Task Force in Borough Hall so those impacted by Hurricane Sandy can connect with government officials to “figure out how to make things happen and get people the money they’re owed.”

Many residents in South Queens and the Rockaways are, nearly 15 months after last year’s hurricane, still struggling to access funding that had been promised to them in the wake of the storm. Numerous individuals have not been able to move back into their homes and others are facing the possibility that their flood insurance premium rates could skyrocket so high because of federal legislation that they would be forced to move.

Additionally, Katz, during her inaugural speech to the hundreds of people filling Queens College’s LeFrak Concert Hall in Flushing, said she would reinstate an education “war room” to monitor school construction projects, track classroom overcrowding, and ensure that arts, culture and science are included in the curricula of all Queens schools.

“We will figure out how to build schools…how to make sure the traditions of every single child are respected,” Katz said. 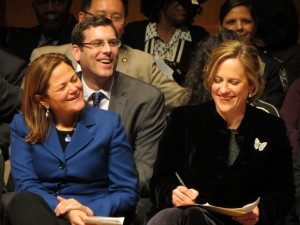 Katz – as well as de Blasio, who swore the new borough president into office – face an educational system rocked by deep-seated resentment for City Hall amongst many parents and teachers who have said that the Bloomberg administration wiped art, music and foreign language programs from schools. Additionally, there is widespread criticism, from parents to such elected officials as Councilman Mark Weprin (D-Oakland Gardens) and his brother, Assemblyman David Weprin (D-Little Neck), that the mayoral administration and the city Department of Education – which is, after the passage of the mayoral control legislation, essentially an extension of the mayor’s policies – have overemphasized standardized testing and driven teachers from the profession thanks to a preoccupation with data.

Additionally, the new borough president said she hopes to improve healthcare in Queens by expanding access to preventative care, investing in primary and urgent health services, and fighting to reopen the hospitals that have closed in Queens. Since 2008, Parkway Hospital in Forest Hills, St. John’s Hospital in Elmhurst, Mary Immaculate Medical Center in Jamaica, and Peninsula Hospital in the Rockaways have shuttered.

“We’re losing a hospital every time we wake up,” Katz said.

Alongside these initiatives, Katz spelled out far-reaching plans for the borough that essentially amounted to molding Queens into a thriving hub for arts, culture, education, and business. She said she envisioned a borough where all residents had the opportunity to make a living and doe everything they need to live and raise families “without having to cross over a bridge or go through a tunnel.”

All of the evening’s speakers heaped praise on Katz – and the long lineup of names like de Blasio, Council Speaker Melissa Mark-Viverito (D-Manhattan), City Comptroller Scott Stringer, and Public Advocate Letitia James show a kind of support that Queens did not have during the tenure of Marshall – who was working with a mayor who was accused of attempting to wipe all the power from the borough presidents’ offices, through such measures as slashing funding for their offices.

“I want to support you in all you do,” de Blasio told Katz. “…My door will always be open to Melinda because you don’t say no to Melinda Katz.”