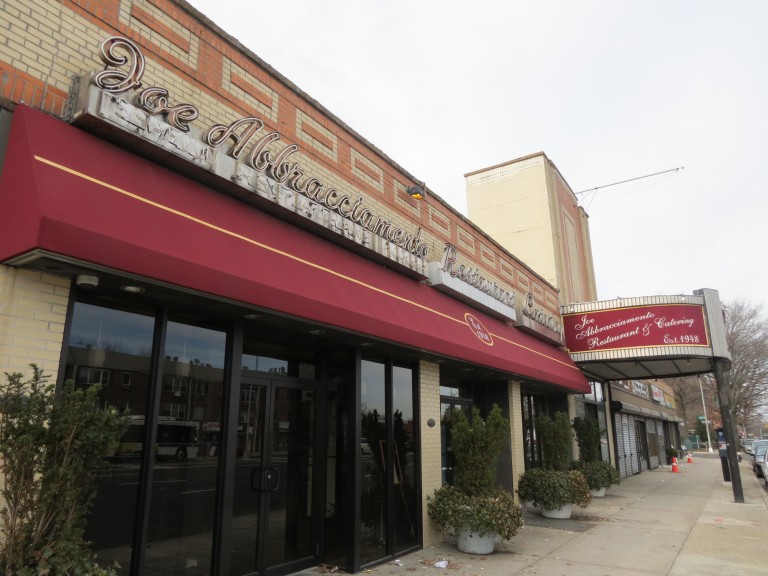 When Joe Abbracciamento returned to Queens after serving in World War II, it was only natural that he would open a restaurant. 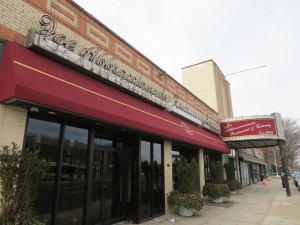 Joe Abbracciamento Restaurant on Woodhaven Boulevard in Rego Park will serve its last meal on March 2. Photo by Anna Gustafson

After all, he had spent most of his life enamored by cooking – and just before he launched the eatery at 62-96 Woodhaven Blvd. the master sergeant in the U.S. Army had frequently served up breakfast, lunch and dinner for thousands of military members during the war.

Thus, from a passion for food and cooking, and that which typically accompanies such things – family and never-ending conversations and laughter that makes a stomach hurt – the Joe Abbracciamento Restaurant was born in 1948.

Over the past 65 years, the spot has grown into what residents said can only be described as a cultural landmark in Queens – a place that has attracted high-profile politicians from both sides of the aisle, from Democratic Vice Presidential candidate Geraldine Ferraro to former Republican Mayor Rudy Giuliani, and has been the gathering site for generations of residents celebrating the kind of life milestones that call for heaping plates of food: Engagements, weddings, birthdays.

But, after more than six and a half decades of countless plates of baked clams and fried calamari and chicken parmigiana, the owners said this week that the restaurant will serve its last meal on March 2.

“It’s overwhelming, the outpouring from people,” John Abbraciamento, the founder’s son, said of the patrons who essentially have not stopped calling the restaurant upon finding out that its last day will soon be upon them. “It’s a bittersweet situation – we’ll miss everyone. We’ve been here so long. Hopefully we’ve done a great service for people in the area.”

John Abbraciamento, who, along with his brother Joe and wife Marie, took the reigns of operation from their father and mother, Connie, said it is time for the three of them to “sit back and relax” after the nonstop work that comes from running a restaurant.

“You never know what the future may bring; I just need to relax a little bit,” John Abbraciamento laughed.

Patrons, of course, are crossing their fingers that the family takes, say, a day off and returns, and many have said the news of the closure marks the end of an era for Queens.

Queens Borough President Melinda Katz, who grew up in Forest Hills, called the restaurant a treasured “establishment that has provided generations of Queens residents and visitors from across the country and around the globe with outstanding Italian cuisine.”

“I have been going there since I was a child and have a particular fondness for the family that founded this Queens institution,” Katz said. “The restaurant is also notable for being a popular gathering place for Queens elected officials, including the trailblazing Geraldine Ferraro.”

The new borough president went on to say that she was “very sorry to hear that Abbracciamento’s will be closing, but I wish John, Joe and Marie a happy and healthy retirement and best of luck in all their future endeavors.”

Councilman Eric Ulrich (R-Ozone Park) called the restaurant “a Queens icon” that will be “remembered as one of the best Italian restaurants in the borough.”

“It’s truly sad to see it close after so many wonderful years,” Ulrich continued. “I wish the entire Abbracciamento family good health, happiness and a well-deserved retirement. They will be sorely missed.”

The list of people who heaped praise on the restaurant is an exhaustive one – and certainly not all of which this article could possibly include – and spans the gamut from 112th Community Council President Heidi Harrison Chain to Woodhaven civic leader Ed Wendell and Breezy Point resident Bill Campione.

Chain said the site had “wonderful food and excellent service, whether you went to a party there or went to have dinner.”

“To me, it was always the go-to place for great Italian food,” said Wendell, who grew up in Woodhaven. “You could always count on it for a great meal – those kinds of places are unique.”

Deeming it a “mainstay of the community,” Wendell said, “it’s a shame to see a place that’s been around so long go.”

“As restaurant-goers, we’re very selfish; we want them to stay for another 40 years,” he laughed.

Campione, who held fundraisers for a scholarship in memory of his later mother for years, said the restaurant owners have “been incredibly accommodating, treating us like family.”

“I’ll never find another restaurant that will give us that same experience that Marie, the Abbracciamento family, and their wonderful staff have given us,” Campione said.

And while the Abbracciamentos – who lived most of their lives in Middle Village – are certainly feeling the bitter-sweet pangs of saying goodbye, they also noted that there are years upon years of good memories to draw upon.

“I took a very big pride in our food – I’m the chef; I’ve been cooking here for 40 years,” John Abbraciamento said. “I’ve worked here with my father all the way through until his last day in 1999. I’ve been working here since I was 12. We’ve been in this area of Queens when Queens was Queens.”