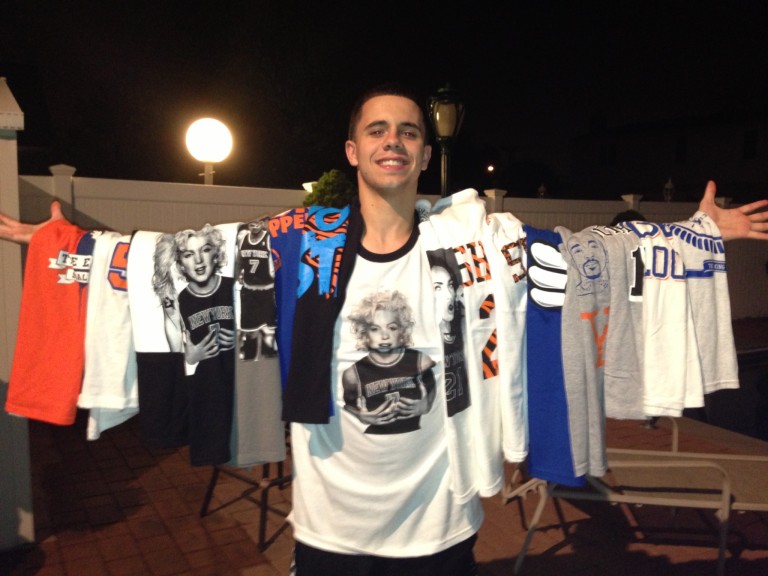 Howard Beach resident Angelo Pellegrino, who co-owns the Knicks clothing company BringIt2NY, shows off the type of merchandise he typically sells. The company, which just launched last year, announced this week that it will send Knicks gear to individuals who send in old sports gear that the company plans to donate to charity. Photo courtesy Vincent Puleo

When two die-hard New York Knicks fans – one from Howard Beach and another from upstate – connected because of their love for the basketball team, they had no idea what was in store for them.

Now, Angelo Pellegrino, of Howard Beach, and Vincent Puleo, of New Windsor, do: Last basketball season, the two launched a clothing company, BringIt2NY, solely dedicate to Knicks gear and creating a community for basketball fans. The business – for which they design such merchandise as hats and tee-shirts – has quickly grown, and Puleo and Pellegrino are hoping to launch the charitable arm of their organization.

“We really want to focus on making this a community, so we’re asking people to send us old sports gear that’s still in good shape but that they don’t want anymore,” Puleo said. “Send it to us, and we’ll send you a gift.”

As part of what they are calling their “Great Tape Charity,” the two will donate the items they collect to a charitable group. So far, they have yet to decide on the organization, but expect the goods to go to a charity working with children.

Items that the two are accepting include sports jerseys, sports hats, shorts, and such equipment as basketballs and footballs.

Depending on what an individual sends in, Puleo and Pellegrino will mail them something from their business in return.

The two business owners originally met because Puleo, a graphic designer, saw Pellegrino’s blog dedicated to the Knicks. Together, they formed an instagram bearing the name that became their company’s: BringIt2NY. Each week, the two would come out with a new Knicks design and ask for feedback from their followers – something the two still insist upon doing.

“We like to involve our customers and fans,” Puleo said. “We want to make something all of us can like. We’ll say, ‘This design, what do you think of it?’”

Ultimately, Puleo said, it’s less about making money and more about creating a solid network of sports fans who want to change the world for the better.

“I’ve never seen anything like this before,” he said. “I’ve gone around to see if there are other people doing this with other teams, and I haven’t found anything. For us, this is a community.”

For more information about the charitable drive, visit http://www.bringit2newyork.com.