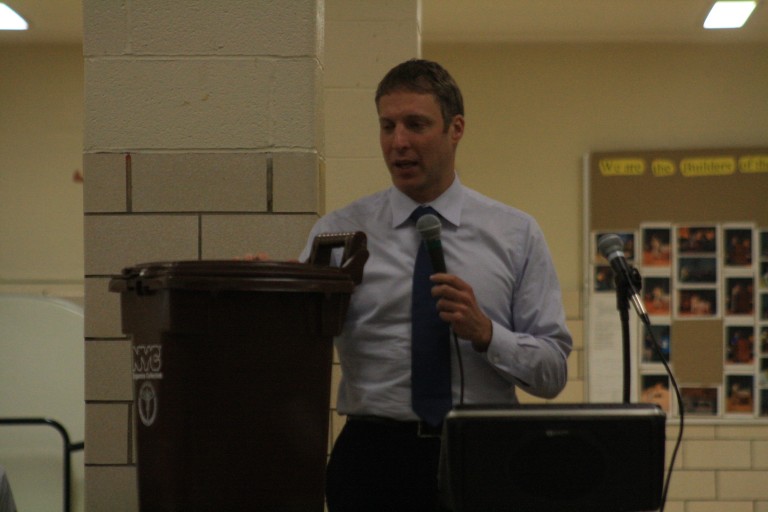 The city will expand its curbside collection of food waste and other organic materials to parts of Queens in the spring, according to Department of Sanitation officials.

The service will come to portions of Glendale, Middle Village and Maspeth in April and May.

According to Sanitation Commissioner John Doherty, the city spent more than $85 million in 2012 exporting organic material to landfills out of state.

“By launching our organics collection program, we will help the city reduce trash disposal costs and create renewable energy or compost — a natural fertilizer,” Doherty said in a statement on Monday. “As we continue to expand the program, greenhouse gas emissions will be reduced and, most importantly, the city will move closer to achieving its recycling goals.”

Residents of single family homes or buildings with nine or fewer residential units can expect to receive a mailer with information about the program. Just before service starts, the Department of Sanitation will deliver to each home’s doorstep a special starter kit container a brochure with details about the program, a small kitchen container and a brown outdoor bin. 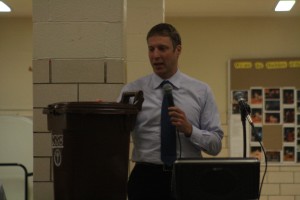 Ron Gonen, the city’s deputy commissioner of sanitation, speaks at Community Board 5’s meeting last week about the expansion of curbside waste collection in Queens. Photo by Bianca Fortis

At the Jan. 8 meeting of Community Board 5, Ron Gonen, the city’s deputy commissioner of sanitation, showed an example of the brown outdoor bins.

Those who choose to participate can put food waste, leaf and yard waste and food-soiled paper in the bins, Gonen said. Residents are asked to set the large bins outside on their recycling day for collection. Any additional material, such as leaf and yard waste, that does not fit in the large bin can be pleased in paper lawn and leaf bags, unlined rigid containers or in clear plastic bags. Any material put into black bags will be collected as garbage.

The organics collection program has already been implemented in parts of Staten Island, Brooklyn and the Bronx. Tens of thousands of containers have been deployed, Gonen said. There are also neighborhood food waste drop-off sites where residents, such as those who live in much larger buildings, can bring their waste. Material is also collected from 400 New York City schools.

Gonen said food waste mixed with refuse left on the curb has a tendency to attract vermin, but the city containers are hermetically sealed and have special latches to prevent unwanted visitors.

He said the kitchen-top containers are small, so space should not be a problem, even for homes with smaller kitchens.

Gonen said the city will do a review of each neighborhood to ensure that buildings that appear to be unoccupied do not receive a container. Then there will be a follow-up route review during which the city will clear away any containers that have not been used.

Once the city collects the materials, they can be used for different purposes, Gonen said. Some will got to the city’s compost facility on Staten Island. Others will be sold to landscapers or given to parks and nonprofit organizations. Some can be turned into natural gas. For at least the next year, material from Queens will go to an upstate composting facility.

Gonen said there are a handful of materials New York City residents regularly buy but cannot recycle. Plastric wrap and styrofoam — which will be banned in the city beginning in 2015 — are among them.

The City Council also passed legislation that by July 2015, all large food generators, such as hotels, stadiums and universities, must separate organic material for collection.

For more information about the organics collection program, visit nyc.gov/organics.