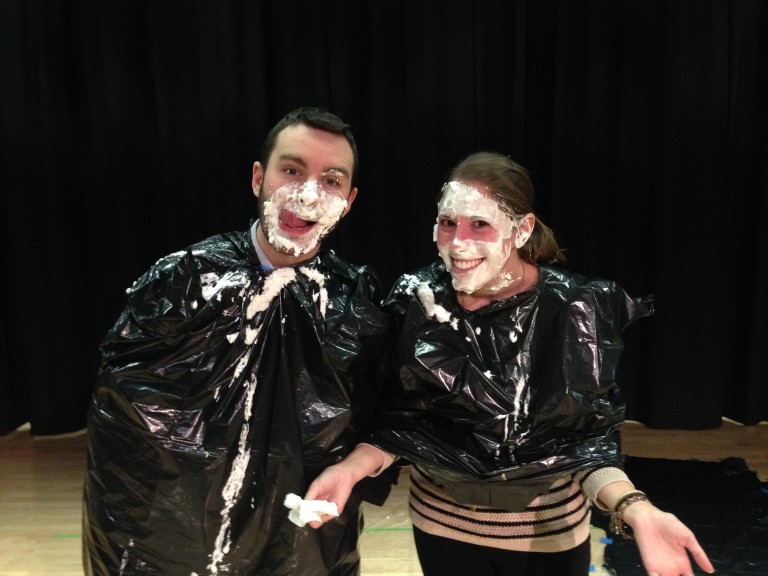 The classes of Maspeth High School history teachers Peter Casey, left, and Gabrielle Baker raised the most money for a drive to benefit typhoon victims in the Philippines – and students were rewarded by getting to see their instructors covered with whipped cream pie during a school comedy night. photo courtesy Jessica Anderson/Maspeth High SchoolFor these students, the incentive was good enough: pitch in, and pie your teacher in the face.

For these students, the incentive was good enough: pitch in, and pie your teacher in the face.

Two clubs of students at Maspeth High School took it upon themselves to raise money to benefit typhoon victims in the Philippines after a devastating natural disaster left the region in ruins in November. They collected coins over several weeks leading into the beginning of December, and their efforts paid off – they managed to land $1,346.45.

The lucky teachers whose classes raised the most were rewarded with a whipped cream pie to the head. Those winning teachers both came from the school’s history department: Peter Casey and Gabrielle Baker. The two faced the pies at a school comedy night held in the middle of December.

But they did not stop there. The school operations manager Mario Matos, Jr. took it one step further and threw in an additional $500 on behalf of the Maspeth Municipal Credit Union, bringing the total to $1,846.45.

Jessica Anderson, an 11th grade Latin teacher and advisor for the nearly 40-student Key Club, helped organize the benefit. Her group, along with the school’s Red Cross Club, teamed up in the late months of 2013 to do whatever they could to help out.

“These students are a really creative bunch,” Anderson said. “Whenever we come up with events, it tends to be mostly student-led. They are well rounded students and I’m glad to see their generosity and leadership rubbing off on others around them.”

Both clubs came together to form a video slideshow of the after effects of December’s devastating typhoon in the Philippines, which claimed more than 6,000 lives, to raise awareness throughout the school. The kids then placed containers in each classroom for teachers to collect donations and promised a pie for whoever raised the most.

Anderson said the Key Club was organized with community service in mind, actively pushing students to host projects and fundraisers for the greater good. Most initiatives, including the typhoon relief effort, formed organically from the bottom-up with the young teens leading the way, she said.

“Right after the Philippines got hit, some of our students sprung right into action,” she said. “They wanted to raise awareness and do whatever they can to help.”

Students from both her Key Club and the service-oriented Red Cross club, led by Latin teacher Alexandra Hensel, found they had a shared interest in mobilizing for the benefit of others in need. The rest, Anderson said, came easy to the active group of kids.

“It was amazing to see the kids really step up,” she said. “The sophomores and juniors took the freshmen students under their wing and took on that leadership position.”

Looking ahead, Anderson said the Key Club would be working with the Maspeth High School dance company to put on “Maspethon,” a dance competition fund-raising event where the kids will collect sponsors for however long they can dance. The proceeds from that event will go towards a charity to be determined, she said.