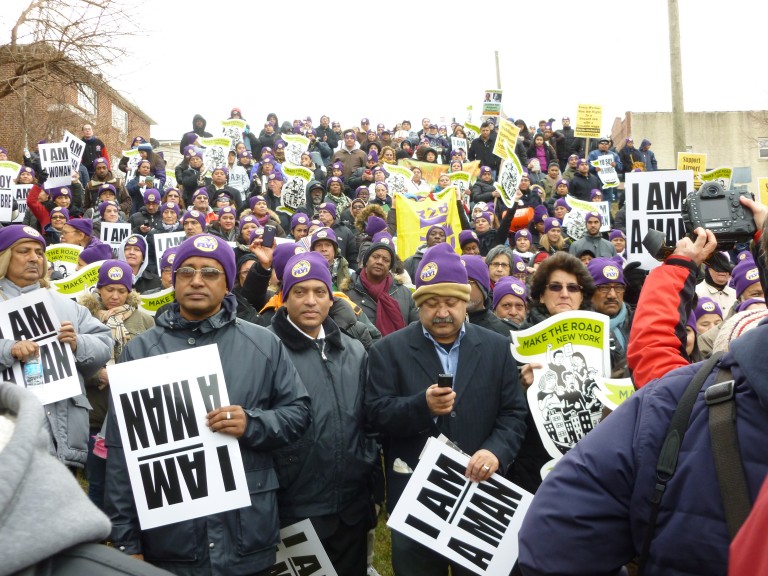 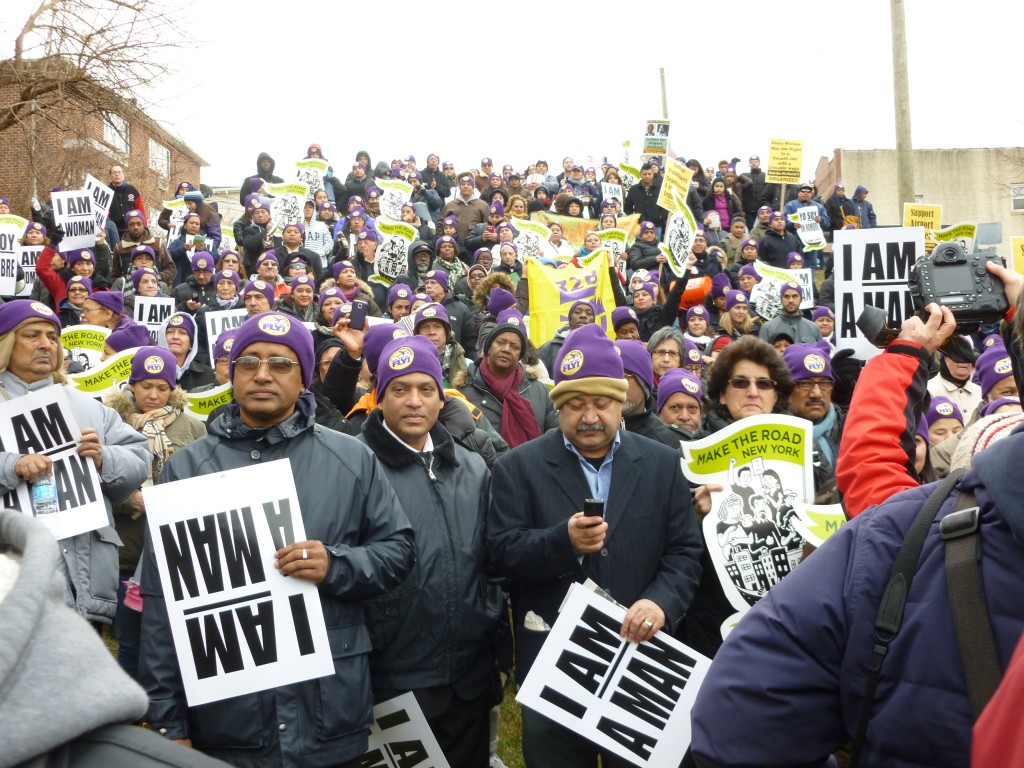 Employees from LaGuardia and John F. Kennedy International Airports protested what they described as unjust working conditions at a rally on Martin Luther King Jr. Day. Photo by Phil Corso

They called for justice, and cops brought out the handcuffs.

An act of civil disobedience outside of Queens’ LaGuardia Airport landed several elected officials, community leaders and airport workers in the back of a police truck after they called for equality in remembrance of Martin Luther King, Jr. The group held a booming rally Monday morning centered on poor working conditions and unfair wages near the airport and then marched down the nearby 94th Street bridge to block traffic, where the arrests followed.

“The City Council stands untied to support you, airport workers, in your demands for dignified work and respect,” said Speaker Melissa Mark-Viverito alongside colleagues Councilmen Costa Constantinides (D-Astoria), I. Daneek Miller (D-Jamaica) and Donovan Richards (D-Laurelton). “We have seen a mobilization across this nation of fast food workers, car wash workers and now airport workers. We will ensure that we stand with you.”

The protests were in support of the service workers union 32BJ SEIU, which organized petitions signed by more than 2,000 workers demanding MLK Day become a paid holiday, but to no avail. Union President Hector Figueroa, who was also arrested, said the airlines and Port Authority have refused to listen to workers’ pleas for the simplest of perks, such as paid sick days and wages above $8 an hour.

“The work of Dr. King is not yet finished,” he shouted at the rally, filled with enraged workers and determined elected officials. “We want a living wage. We are people. We deserve better.”

The Port Authority did not return requests seeking comment, as its press office was closed in observance of the national holiday. Air Serv, Aviation Safeguards and PrimeFlight – the companies that employ many of the airport employees who protested – also did not comment.

Andrew Loyd, a cabin cleaner at John F. Kennedy International Airport, said he found it nonsense to be a full-time employee but still require public assistance to get by without the luxury of paid sick days or vacation time.

podium to speak. “We are asking for respect. This is unity. This is a day of reckoning.”

In support of the workers, Rangel plugged the city’s newest administration under Mayor Bill de Blasio, instilling hope into the enthusiastic crowd for a better tomorrow, adding he was certain the mayor would spearhead the fight for decent wages.

“Dr. Martin Luther King, Jr. did not die just for us to sit on our fannies,” Rangel said. “We don’t have to die for our freedom, but we have to make sure everyone is included.”

City Public Advocate Letitia James delivered a passionate address, pausing in between each phrase to yell, “No justice,” to which the protestors replied, “No peace.” James, who opted against joining the others in civil disobedience, also made sure to note better days were ahead under the new administration.

“The dream for Dr. King has unfortunately become a nightmare for too many airport workers,” James said. “The new day has come in the city of New York, and it is consistent with the dream of Dr. King to lift all people out of poverty.”

Martin Luther King, Jr. Day was deemed a national holiday under President Ronald Reagan in 1983 and has since been celebrated on the third Monday of every January.