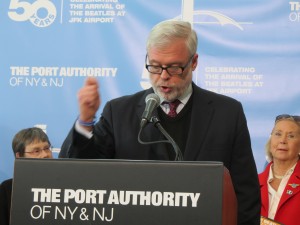 “I think [Biden’s statements] were somewhat accurate,” Foye said at an unrelated event celebrating the 50th anniversary of the Beatles’ arrival in the U.S. at JFK last Thursday.

During a speech on infrastructure in Philadelphia Feb. 6, Biden said, “If I blindfolded someone and took them at 2:00 in the morning into the airport in Hong Kong and said, ‘Where do you think you are?’ they’d say, “This must be America; it’s a modern airport.’”

“But, if I blindfolded you and took you to LaGuardia Airport in New York, you must think, ‘I must be in some third world country,’” Biden went on to say. “I’m not joking.”

Foye told reporters that the Port Authority is working to improve conditions at LaGuardia.

“We’re proud of the progress that’s been made, but we’re not proud of the current state of the building,” he said in reference to LaGuardia’s Central Terminal Building.

Following the vice president’s statements, the Port Authority issued a statement that emphasized a number of capital improvement projects.

“Significant investment in transportation infrastructure is the key to growing our economy and creating jobs, which is why the Port Authority this week proposed a 10-year, $27 billion capital plan that creates more than 126,000 jobs and invests $8 billion in modernizing the region’s airports,” the agency said in the prepared statement. “We are fast-tracking efforts that have lagged for more than a decade and investing $3.6 billion through an innovative public-private partnership to build a new Central Terminal Building at LaGuardia Airport that will provide passengers with a world-class terminal.”

One of the busiest airports in the world, LaGuardia had more than 25 million flyers pass through it in 2012 – but in addition to Biden, the facility’s conditions have also prompted criticism from Gov. Cuomo.

“LaGuardia Airport is ranked as the worst airport in America, believe it or not,” Cuomo said during his annual State of the State address. “That is a disgrace.”