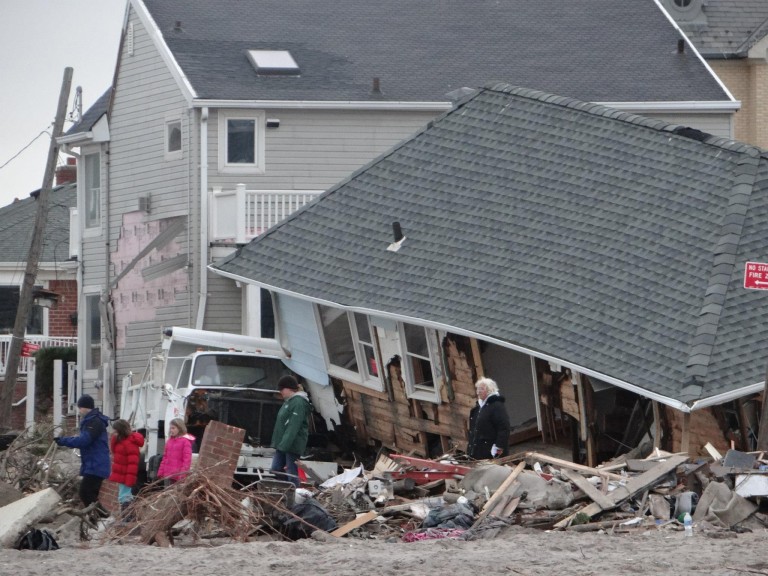 After Hurricane Sandy victims have had to do everything from mortgage their homes to use retirement funds to rebuild following the story, they said they were hoping there might, finally, be some help coming their way with the city’s Build It Back program. However, this has turned out to not be the case and not one Sandy victim who has applied for financial help from Build It Back has received a check. File photo

Sixteen months after Hurricane Sandy slammed into New York City, some Queens residents still have not been able to return to their homes devastated in the storm because of bureaucratic red tape that is strangling them financially and emotionally, borough residents and lawmakers said this week.

While thousands of people whose lives were overturned during Sandy have applied to the Build it Back program – a city initiative launched in June that is using hundreds of millions of dollars in federal funds meant to help hurricane victims still recovering from the storm to return to their homes – not one of those homeowners have seen construction start on their properties.

“Those people who are still out of their house – they’re paying a mortgage on the house, which is an empty lot in some cases; they’re paying water bills and tax bills – and they’re paying rent a lot of the time while they wait to rebuild,” said Dan Mundy, Jr., president of the Broad Channel Civic Association who has spoken to hundreds of people in his neighborhood about the problems that have rocked the Build it Back program.

The initiative has been so problematic that the woman leading Build It Back, Kathryn Mallon, is resigning from her post and will leave as of Friday, Feb. 28. Mundy and elected officials, including Councilman Eric Ulrich (R-Ozone Park) and state Sen. Joe Addabbo Jr. (D-Howard Beach), have praised Mallon, with the Broad Channel leader saying “she was working like crazy” but still did not have the kind of support needed to make effective change.

“The program is missing a critical component – it’s lacking the mayor’s involvement,” Mundy said. “Most of us community leaders understand the transition with a new mayor…but we’re almost into March. We need a new deputy mayor who says, ‘I got it; I’m handling this.’”

Mayor Bill de Blasio held a press conference Monday afternoon on Staten Island, during which he vowed to release a plan for helping Sandy victims within weeks – though he would not answer questions specifically about the failures of the Build it Back program.

“It’s self-evident that the pace has been a profound problem,” de Blasio said during the press conference, also saying that, “all levels of government have to do better.”

Queens lawmakers too have expressed a litany of frustrations with Build it Back, with Ulrich saying calls about the deeply flawed program “constitute the number one complaint we get in the Rockaway district for sure, and we get a good number of complaints at the Ozone Park office as well.”

“The general sense is that people are extremely frustrated and disappointed with the program and the lack of response on the part of the people who are administering it,” Ulrich said. “They’re losing paperwork and not calling back. People on the hotline don’t have answers.”

Mundy said of the hundreds of families with whom he has spoken about Build it Back, not one has said they have not had an issue with lost paperwork.

“People just want to get back in their homes,” Ulrich said. “Whatever it takes, we need to do it – the federal government, as well as the city. We need to cut through the red tape and get people the help they need.”

Addabbo held a forum in on Build it Back last week in Howard Beach, which he said was in part inspired by his office also being flooded with complaints about the program.

“Build it Back cannot happen fast enough for us,” Addabbo said. “I want money in my constituents’ hands tomorrow.”

The state senator too stressed the lack of information coming from Build it Back officials.

“Build it Back said the reason the majority of people aren’t getting information back is because of sheer volume,” Addabbo said. “They do have a sizable amount of workers, but they can’t keep up with the paperwork.”

According to Addabbo, there has been discussion about reopening the application process for Build it Back, which he said would help a number of individuals in his district.

Whatever changes are made to the city’s Sandy recovery initiative, it needs to happen – and fast, Mundy said.