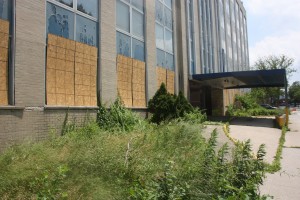 The fate of the former Parkway Hospital site in Forest Hills remains up in the air. File photo

Forest Hills residents wondering about the fate of the former Parkway Hospital building, located at 70-35 113th St., may have to wait a bit longer in the wake of two cancelled or otherwise missed meetings between the building’s prospective new owners and Councilwoman Karen Koslowitz (D-Forest Hills).

Late Tuesday, Koslowitz said that a second scheduled meeting with representatives from 70-35 113 Street Holdings LLC, the reported new owners of the defunct 56,400 square-foot Parkway Hospital building lot, did not take place due to scheduling conflicts.

Further, Koslowitz reported that the impending sale of the building is not yet complete and still must clear several hurdles, including zoning issues.

It is still unclear at this time what the new owners intend to do with the building, if and when the sale is completed.

Numerous community members, including Community Board 6 District Manager Frank Gulluscio, as well as Koslowitz, have said they would like to see new senior housing on the old Parkway site. Some have even suggested a hotel, although others have said that idea seems unlikely.

The holding company, as of Tuesday, has not yet listed with the state as an LLC.

New York requires that within 120 days after organization, a limited liability corporation (LLC) must publish in two newspapers a copy of the articles of organization or a notice related to the formation of the LLC.

The Parkway Hospital site, vacant since 2008 when it was shuttered by the state Commission on Healthcare Facilities, was reportedly sold at a foreclosure auction on Jan. 10 for $22 million.

Current liens on the Parkway building total more than $14.8 million, according to real estate website Propertyshark.com. Representatives from Auberge Grand Central LLC, the company that holds Parkway’s mortgage, could not be reached.

In recent months, the Parkway site has come under scrutiny once again as a community eyesore, its’ lot littered with overgrown weeds and graffiti. Several Queens’ blogs have featured the site in recent weeks as a local “eyesore.”

Aquino had long argued against the state’s commission, saying that Queens was underserved with fewer hospital beds than other boroughs, including Manhattan.

The state commission said that other local hospitals were adequate to serve Queens’ residents.

But, with the closings of St. Johns in Elmhurst, Mary Immaculate in Jamaica and Peninsula in the Rockaways, the borough actually lost four hospitals between 2008 and 2012.

Both Seminerio and Rosen were ultimately convicted on bribery charges.

Seminerio died in prison and Rosen was sentenced to three-years.

However, Aquino’s apparent victory with Parkway was short-lived when he was found guilty on federal bribery charges, resulting from his attempts to bribe state Sen. Carl Kruger in a last-ditch attempt to resuscitate Parkway.