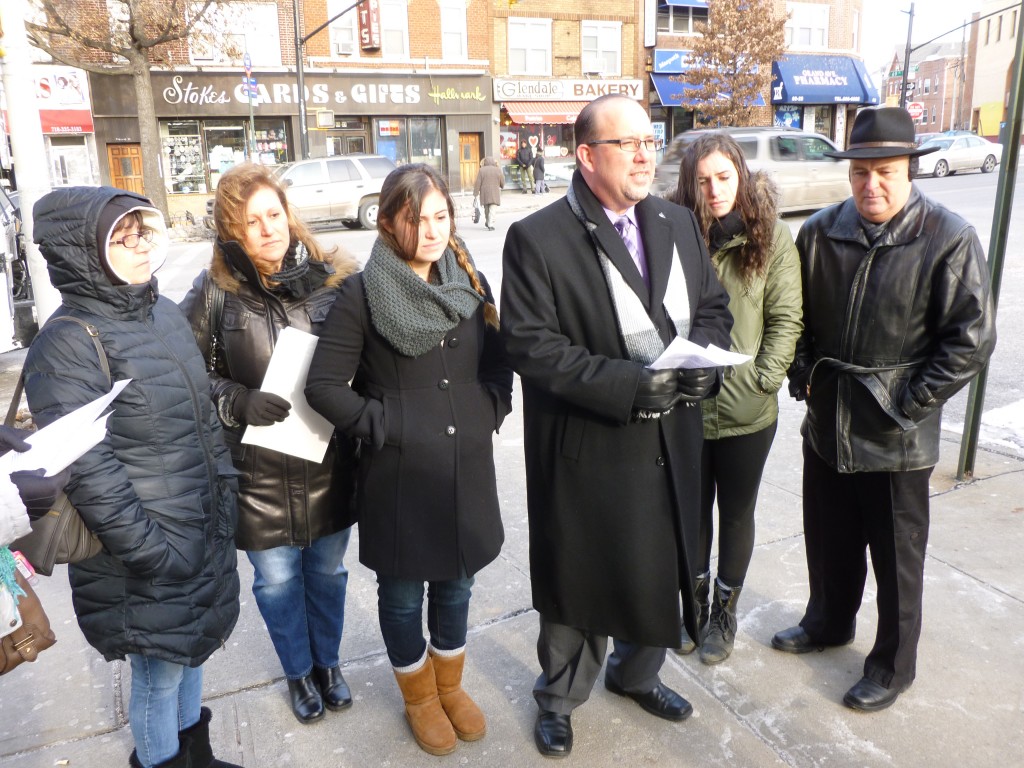 Civic leader Dmytro Fedkowskyj, center, and other community advocates gathered in Maspeth Tuesday to urge the city to implement policies that will prevent the pedestrian deaths that have plagued Queens – and the rest of the city. Photo by Phil Corso

The city got a closer look at Mayor Bill de Blasio’s Vision Zero campaign to curb traffic-related deaths, and some of Queens’ pedestrian advocates said they were big fans with high hopes.

De Blasio’s initiative set out to reduce pedestrian fatalities to zero over the next 10 years and laid out several developments over the past week, including plans to reduce the citywide speed limit from 30 miles per hour to 25 and installing red light cameras throughout the boroughs. His message has been under the microscope especially in Queens, where traffic fatalities were the highest throughout the city in 2013.

Borough politicians and community leaders have been keeping a close watch on the Vision Zero campaign, and so far, feedback has been positive. What was most important, advocates said, was whether or not lawmakers can deliver on the final product.

“The mayor’s Vision Zero initiative is welcome news to all of us in Queens and I strongly support his comprehensive crackdown on dangerous drivers and hazardous conditions in our streets,” said Assemblywoman Marge Markey (D-Maspeth). “Locally, I have been working with the borough DOT Commissioner about several street safety problems in Maspeth, most urgently where a senior citizen was recently killed in a crosswalk on Grand Avenue by an unlicensed driver making an illegal turn. We look forward to improvements at this intersection very soon and I have also asked DOT to revisit improvements near Ridgewood Gardens and the busy intersection of Grand and 69th Street.”

Markey plugged legislation she introduced along with state Sen. Mike Gianaris (D-Astoria) that would increase penalties on unlicensed drivers who cause injury or death when behind the wheel. Both lawmakers also stood beside City Councilman Jimmy Van Bramer (D-Sunnyside) earlier this month along a busy strip of Northern Boulevard, urging the mayor to include the road in his initiative.

Community advocate Dmytro Fedkowskyj has also been in support of making changes to Maspeth roadways, specifically zoning in on Grand Avenue, where 68-year-old Angela Hurtado was killed while crossing the street in January. With red light cameras already in place in parts of the borough, Fedkowskyj said the next step was to bring physical changes to dangerous intersections and educate the youth.

“Many parents would like to see more crossing guards at their schools,” he said. “Far too many of them need more than one or two protecting their children. Knowledge is power and I would like to see a short pedestrian safety lesson outlined for high school students every year. This short lesson can reinforce pedestrian safety before they become part of the driving population.”

City Councilman Rory Lancman (D-Fresh Meadows) was one of the many in attendance at a Council hearing on the Vision Zero initiativeMonday and said the city needed to do more to include the Education Department in the project.

“As I visit with schools in my district to hear their priorities and chart an agenda to meet their needs, I am constantly told that traffic safety at our schools are among the highest concerns of parents, teachers and principals,” Lancman said. “It’s critical that the Department of Education be included in the Vision Zero process, and be held accountable for its role in making the traffic environment around our schools safer.”

Celia Castellan of Transportation Alternatives has long been pushing for changes to some of Queens’ most dangerous roadways such as Queens Boulevard and said de Blasio’s ongoing rollout of Vision Zero has been promising. Moving forward, she said the group hopes to see the City Council take leadership on the issue and fight for a home rule on the speed limit decision.

“We are consistently one of the most dangerous boroughs to walk, bike and use public transit,” she said. “This is really about ushering in a new era for New York. We know Queens has to be a central focus of this plan to take on the high-speed, high-volume streets like Queens Boulevard that function like highways.”