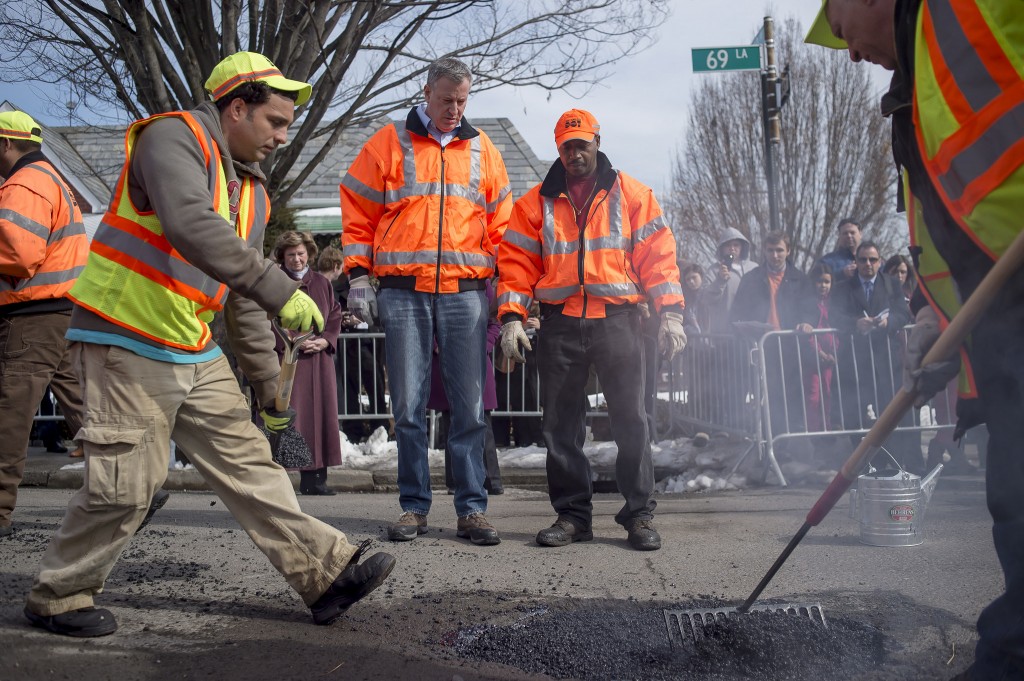 An onslaught of winter snowfalls left some city streets riddled with potholes and Mayor Bill de Blasio hit the Maspeth pavement to plug them.

With shovel in hand, De Blasio and his entourage took to the intersection of 69th Lane and 60th Avenue Thursday morning to fill residents in on his pothole blitz in the wake of numerous storms, which brought more snow so far this year than ever before in history. He stood beside city Transportation Department Commissioner Polly Trottenberg to deliver his newest campaign to plug problematic potholes while also giving kudos to city workers for filling a record-breaking 113,131 potholes – and 27,000 in Queens – to date.

“All the storms, tire chains and snowplows have added up to unprecedented wear-and-tear on our streets. Anyone out on our roads can see it firsthand,” de Blasio said. “Our new transportation commissioner has wasted no time in taking this problem head-on. The DOT has already made history with its efforts so far this year, and in the coming months, it will go above and beyond to keep our streets in good repair.”

The mayor helped fill a gaping hole in the Maspeth street alongside DOT workers and said there would be weekly pothole blitzes throughout the city targeting areas in similar despair, thanks to an additional $7.3 million in the DOT’s upcoming executive budget. His plan included 50 DOT crews assigned across the five boroughs for pothole repairs every weekend and an additional 30 daily pothole teams shouldering six tons of material to fill in the gaps.

Some of the city’s top paving priorities, Trottenberg said, included Beach Channel Drive in the Rockaways, parts of the Belt Parkway, and 159th Avenue between 79th and 80th streets. The overall plan targeted roughly 90,000 square-yards of pavement, she said.

“I want to thank the dedicated men and women of DOT’s Roadways Division who have worked tirelessly this winter in harsh conditions to tackle the toughest roads in the city and keep motorists moving safely on our streets. This pothole and roadway maintenance plan will give them the tools and resources they need to get the job done,” Trottenberg said. “And I am grateful to the mayor for his support and leadership during the most challenging, snow-filled winter in a generation.”

Trottenberg outlined some of the city’s latest innovations in pothole repairing, including new road surface material designed for cold weather conditions as well as a new asphalt mix created specifically for warm weather. The technology would allow the city to be more proactive in its approach to filling potholes without weather restrictions she said.

De Blasio also touted a plan to equip DOT crews with digital tablets so they could track pothole reports in real time. And to push the innovation envelope even further, the mayor also said the DOT would be helping to host an engineering competition this year to solicit new ideas that could make pothole prevention even more robust.

“This winter has really challenged the men and women of the DOT,” de Blasio said. “Every day has been unpredictable. They’ve really shown us what they’re made us given this amount of adversity.”

That same day, de Blasio was ironically spotted speeding on his way out of Queens, according to published reports. The sighting came at a time when the mayor has been pushing hard for pedestrian safety in the traffic-heavy borough, but the mayor denied any wrongdoing.

“Should everyone who works for me and should I follow the law scrupulously? Of course, yes,” de Blasio said at an unrelated press conference. “If the NYPD in any given instance believes that there’s a security reason for doing something a certain way, I think that’s important to recognize and respect.”