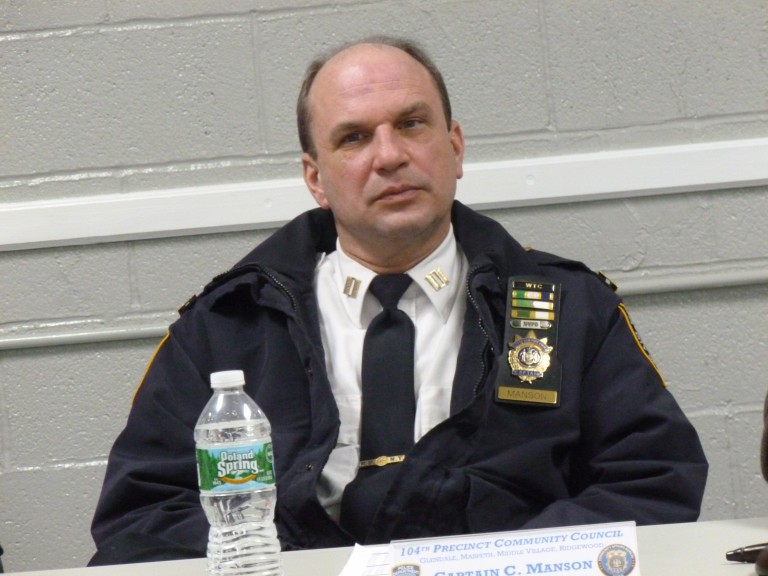 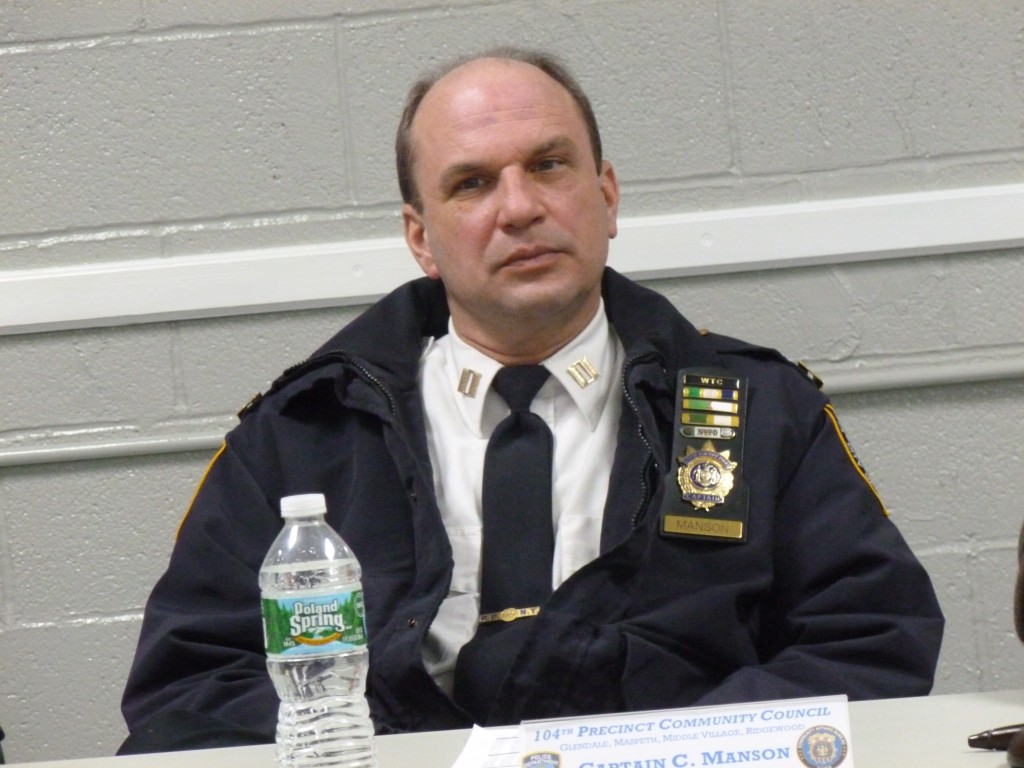 While two men were arrested this week and charged with breaking into a number of places throughout Queens, including in Ridgewood and Glendale, Capt. Christopher Manson, pictured, and officers from the 104th Precinct are urging residents to continue to be aware of their surroundings. Photo by Phil Corso

Two men from Maspeth and Long Island City were accused separately of breaking into several spots throughout the borough over the last six months and stealing anything from money to cremation ashes, Queens District Attorney Richard Brown said.

“Nobody was safe from the crimes allegedly perpetrated by the defendants – including the dead,” Brown said. “In one instance, a box containing the cremated remains of a loved one was allegedly stolen from a burglarized apartment.”

In the first case, Ardila acted as a lookout between 4 p.m. and 5 p.m. on Feb. 21 when two other unknown people trying to burglarize homes along 75th Avenue in Ridgewood and on 77th Avenue in Glendale, Brown said. The criminals apparently pried their way into holes with a tool like a screwdriver, breaking in through the front door, the district attorney said.

That same day, cops spotted two people entering an apartment building on 103rd Avenue in Ozone Park and Ardila parking his gray BMW nearby and acting as a lookout. Soon after, Brown said three people left the building – two of home were carrying bags – and placed one bag into Ardila’s car. The BMW then left along with a blue Honda containing the unknown men, Brown said.

In the second case, West was seen on video surveillance footage breaking into the Promise Christian Academy Church on 31st Avenue in Flushing on Sept. 7, when he allegedly stole $2,750 in cash that was inside a locked desk drawer there, Brown said. A second complaint against him also alleged that on Feb. 7, West was spotted taking $160 cash out of a social worker’s unattended purse inside an Asian Community Care Management center on Sanford Avenue in Flushing, the district attorney said.

West was arrested Feb. 22 soon after he was seen around 7 p.m. entering the Boune Street Community Center on Roosevelt Avenue in Corona, where Brown said he forced his way in and stole donation envelopes containing cash.

Both men face up to 30 years in prison if convicted, Brown said.

“While the defendants will be held accountable for their alleged actions, businesses and residents should take adequate precautions by inspecting their premises to see if there is a need for added security,” Brown said.

A spokesman for the 104th Precinct said another two white or Hispanic men were named suspects in another string of robberies reported throughout Ridgewood last week. The precinct said the pair allegedly targeted mostly women between the hours of 3 p.m. and midnight. While the two men were apprehended, police are urging residents to be alert of their surroundings at all times.