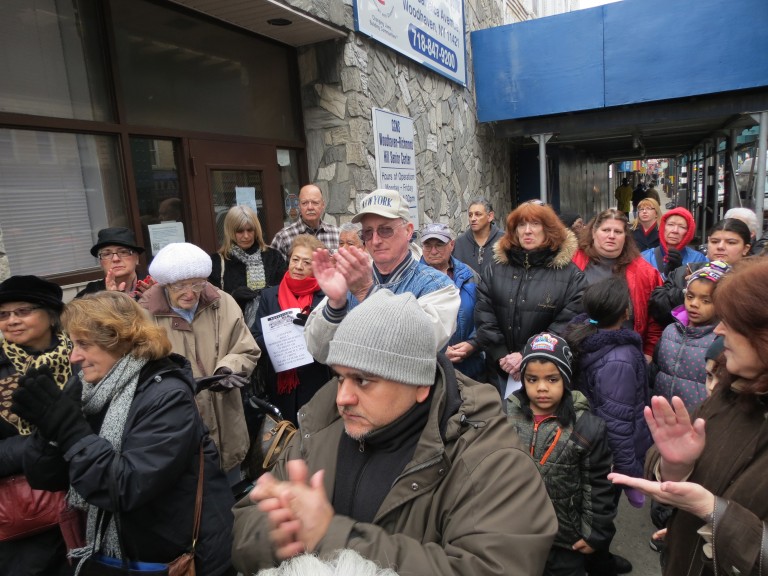 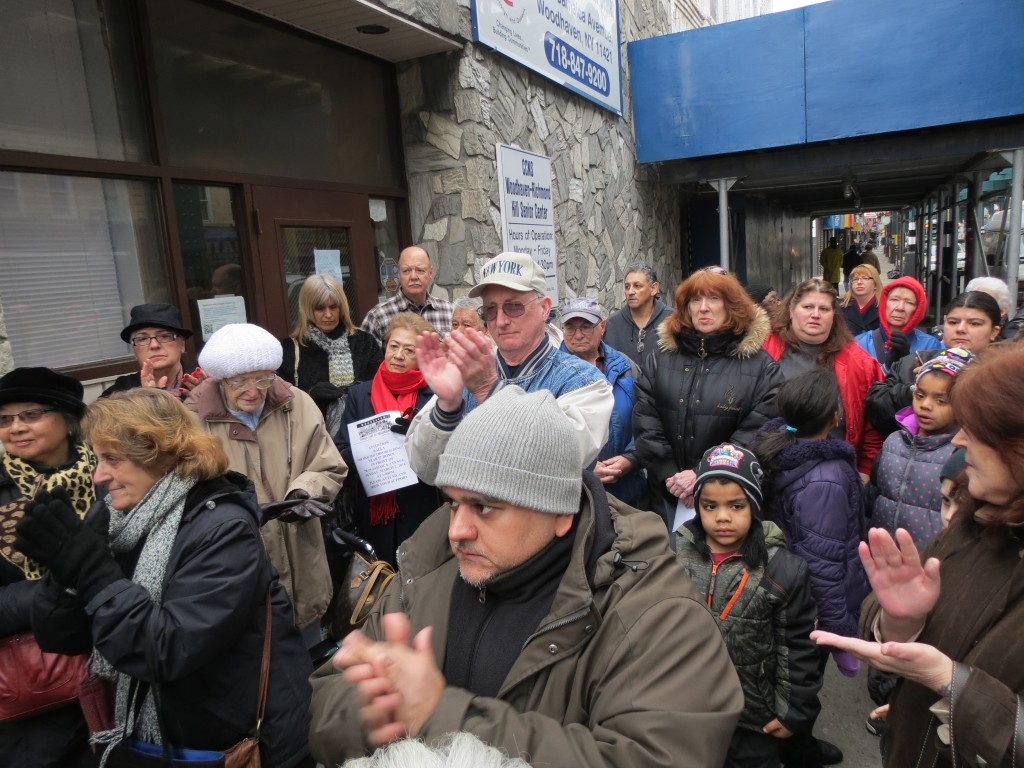 A building that partially collapsed in Woodhaven last April is becoming increasingly dangerous to the community and must be torn down before tragedy strikes, civic leaders and residents said at a rally held Sunday. Photo by Anna Gustafson

“Mayor de Blasio: Tear down that wall,” Woodhaven civic activist Ed Wendell said, invoking the famous statement from former U.S. President Ronald Reagan as he raised his hand and pointed to a building on Jamaica Avenue that residents, civic leaders and elected officials said poses an immediate danger to the community and, nearly 11 months after it partially collapsed, is long overdue to be razed.

More than 100 people gathered for a rally Sunday afternoon outside 78-15 Jamaica Ave., home to the Woodhaven-Richmond Hill Ambulance Corps, to advocate for the city Department of Buildings – or the owner – to tear down the ambulance corps’ neighboring building at 78-19 Jamaica Ave. – a site where the roof collapsed last April, sending bricks plummeting to the street and sidewalk below. A car was crushed, but no one was hurt in the incident – something residents called extremely lucky that may not be the case should the building further crumble.

“This building is a disaster waiting to happen,” said Maria Thomson, executive director of the Greater Woodhaven Development Corporation and the Woodhaven Business Improvement District. “We cannot wait for another collapse.”

After last April’s debacle, the site has remained virtually untouched – meaning the Catholic Charities Woodhaven-Richmond Hill Senior Center has, after vacating its home next to the collapsed site – been unable to return. This, in turn, has, civic leaders said, left the ambulance corps in a financially precarious situation because it has not been receiving rent from Catholic Charities, which had used space in the corps’ building for its center. 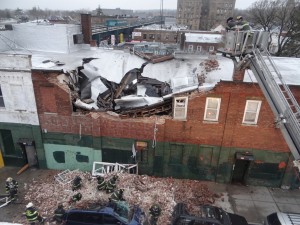 An aerial view of the building at 78-19 Jamaica Ave. in Woodhaven just after it collapsed April 12. File photo

To make matters worse, melted snow from the collapsed structure caused water to flood into the ambulance corps headquarters almost two weeks ago and may have compromised that building’s structural integrity, according to the corps and the Woodhaven Residents’ Block Association.

And, ambulance corps members said, if the senior center isn’t able to return to its former home base and start paying the volunteer group rent again, it likely will not survive.

“This ambulance corps has been in operation for 49 years – please, let us celebrate our 50th anniversary,” said John Bennett, a member of the ambulance corps’ board of directors. “We’ve rescued Woodhaven people, and now we need them to rescue us.”

Before its collapse, the building at 78-19 Jamaica Ave. – which previously housed a furniture store but was vacant by last April – had been cited for numerous violations. However, the problems were not addressed and the city Fire Department said the collapse was in part due to heavy rainfall taxing already shaky infrastructure.

“Every day this building is standing, the more dangerous it becomes for this community,” Community Board 9 Chairman Jim Coccovillo said at the rally.

Wendell agreed, saying, “we don’t want to be back here holding a candlelit vigil because something terrible has happened.”

George Kochabe, the head officer of the company that owns the Woodhaven building, 78-19 Jamaica Ave. LLC, appeared in Queens Criminal Court Friday and was ordered to immediately hire an architect and file for a work permit at the site. His court appearance came following a warrant being issued for his arrest, and he was told he must retain the architect and file for the permit before his next court date on April 10, according to information sent from the Queens borough president’s office to CB 9 members.

According to the information sent to the board members, Kochabe’s attorney reportedly said in court Friday that his client is taking legal action against his insurance company over coverage for the building – which is why he said nothing has been done at the site. However, Kochabe was advised in court that waiting on the outcome of legal action against his insurance company was an insufficient reason to not launch repair work.

Still, residents said the owner has been missing in action for so long that they have little faith he will turn over a new leaf and begin fixing the building.

“It’s something we shouldn’t stand for – the Department of Buildings has to do something – and do something now,” Woodhaven Residents’ Block Association President Martin Colberg said Sunday.

State Sen. Joe Addabbo Jr. (D-Howard Beach) stressed that, “we’re tired of hearing what the owner might do.”

“He’s proven to us he doesn’t really care about this building,” Addabbo said. 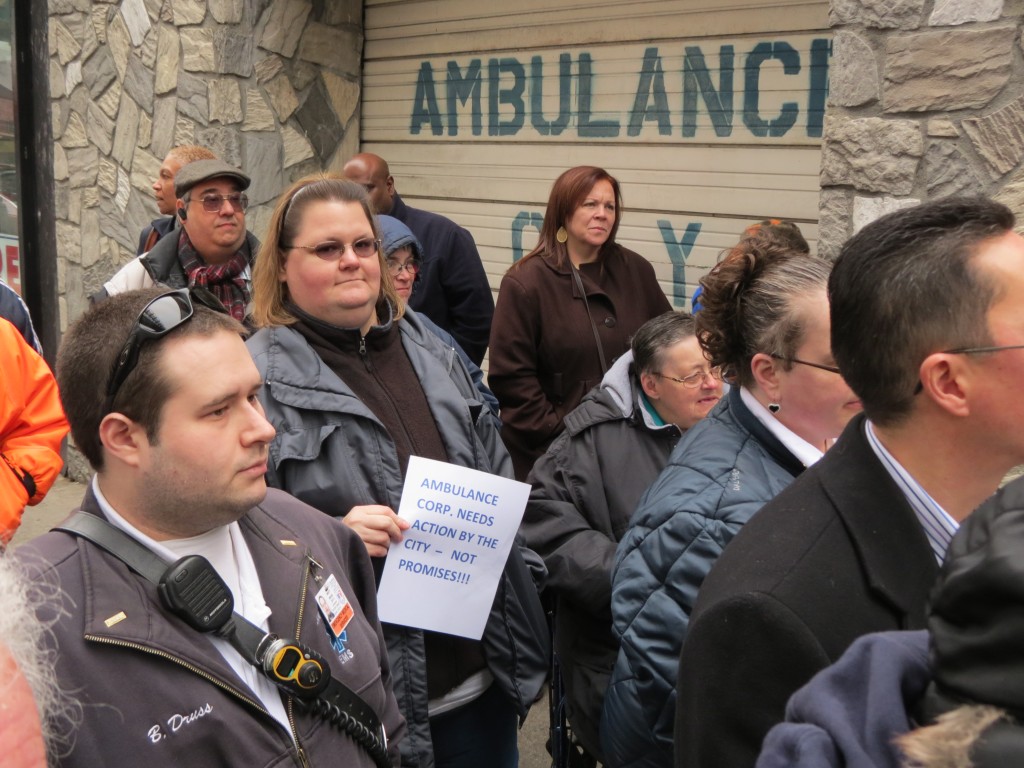 Residents, civic leaders, and elected officials attended a rally Sunday to urge the city to tear down a building that partially collapsed in April. Photo by Anna Gustafson