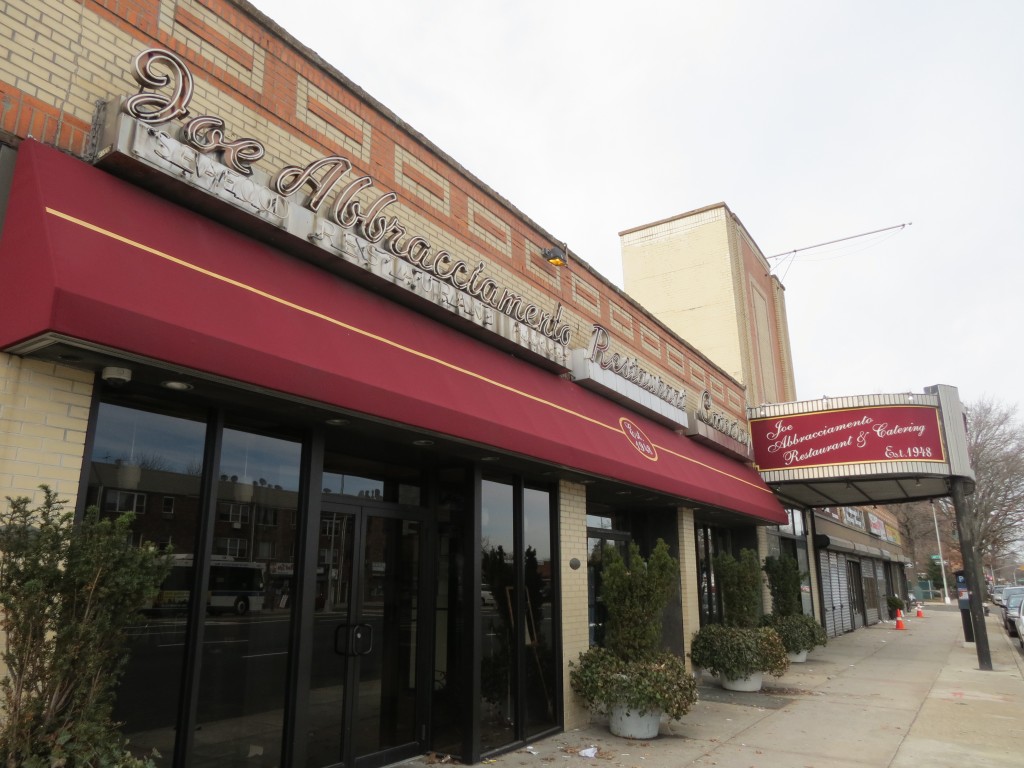 The building of a beloved Rego Park restaurant might be sold to make way for residential housing, officials said.

Long Island City-based developer Criterion Group filed paperwork with the city Department of Buildings last week proposing to build a seven-story residential building where the recently shuttered Joe Abbracciamento Restaurant currently sits. The famed eatery at 62-96 Woodhaven Blvd. closed its doors for good this month after more than 60 years in business and owner John Abbracciamento said he was in the process of closing on a deal deciding the building’s fate.

“Time will tell,” the owner said.

A spokeswoman for the Buildings Department said Criterion Group was only in the beginning phases of its development project at the site and no permits have been issued for the plan just yet. The group’s preliminary application outlined plans for roughly 82,000 square feet of residential space that would include 120 apartments and 47 parking spaces.

The plans included a total of 81,719 square feet of residential space and 3,910 square feet for parking.

Abbracciamento said the Rego Park community has been pressing him for weeks as to his future plans for the building because of the restaurant’s high-profile status in the community after decades in business. A spokesman for the Criterion Group also noted a high volume of calls ever since initial reports pegged the group as the building’s next potential owners.

“I’m surprised by how much interest this has already generated,” he said. “We haven’t even finished our design stage yet. We are still waiting for the property to be acquired.”

That kind of attention came as no surprise to Alex Blenkinsopp of the Woodhaven Residents’ Block Association. His group held its annual fundraiser at the Joe Abbracciamento Restaurant and must now scout the community to find a new spot to host parties. To say he was sorry to see it go was an understatement, the Woodhaven resident said.

“Queens will be a little less well-fed because of the loss. We wish the restaurant owners and employees well,” Blenkinsopp said. “There are rumors swirling around about what will take [the restaurant’s] place. Whatever it is, we hope it’s a fitting replacement for this iconic establishment on Woodhaven Boulevard.”

Michael Perlman of the Rego-Forest Preservation Council said his group has been keeping a close eye on the restaurant since word of its closure circulated throughout the community. He said he remembered back when Abbracciamento shared the space with the now-defunct Drake Theater, before it closed down in the ‘90s.

One his group’s biggest concerns, Perlman said, was making sure Criterion Group heeded his plea to maintain or restore the building’s historic character. When he heard of potential plans to bring in more residential housing in the Rego Park community, Perlman said he felt the neighborhood had already seen enough development and future projects should be scaled down or at least consider the historical importance of standing structures.

“Our neighborhood already has too much development, in our opinion,” Perlman said. “These new developers should consider our viewpoints in regards to restoration. If they’re really on track towards developing it, why demolish such a historical theater? Build above it.”